The First Flight Commemorative Half Dollar Coin remembers when Gustave Whitehead flew his bat-like invention roughly a half mile in the early morning hours of August 14, 1901.

From the Wilmington, NC, Semi-Weekly Messenger newspaper of August 27, 1901:

Bridgeport, Conn., August 21. With the purpose of perfecting a flying machine that will solve the problem of aerial navigation, Gustave Whitehead, of this city, and W. D. Custead, of Waco, Tex., have formed a partnership.

Mr. Whitehead has invented a flying machine and Mr. Custead an airship. Last Tuesday night Mr. Whitehead, two assistants, took his machine to a field back of Fairfield and for the first time he flew it for half a mile. It is said to have worked perfectly.

Mr. Whitehead’s machine is equipped with two engines, one to propel it on the ground on wheels and the other to operate the wings or propellers. In order to fly, the machine is speeded to a sufficient momentum on the ground by the lower engine and then the engine running the propellers is started, which raises it an angle of about six degrees. Custead’s airship rises vertically, requiring no running start.

The hopes of the inventors for success are pinned to a new pressure generator which Whitehead has invented. He has demonstrated that the generator will work, for he used it to furnish power for both of his engines at the trial of his machine last Tuesday.

Calcium carbide is used as fuel. By a series of rapid explosions the acetylent gas is forced into the chambers, where with other chemicals it produces a powerful and even piston pressure. The new generator will, it is said, lessen the weight of motor power seventy-five percent.

Mr. Custead is backed by a number of Texas and southern capitalists to the extent of $100,000.

While M. Santos-Dumont, the Brazilian, is repairing his dirigible balloon in Paris, Gustave Whitehead, a Connecticut inventor, is bidding for aeronautical, honors with an airship with wings that soars like a bird.

Mr. Whitehead has made several experimental trips, it is claimed, with a certain amount of success and without an accident. His longest flight up to date was half a mile at an elevation of 50 feet from the ground.

The airship is certainly a queer looking bird. It acts as strangely as it looks. It can run along the ground at 30 miles an hour, and when the operator wants to travel through the air all he has to do is to make sure he is carrying enough accident insurance, pull a throttle, and hold fast while the machine opens its, wings, flaps them, and darts upward, says the Boston Journal.

Mr. Whitehead lives at Bridgeport, Conn. He has been an assistant to Prof. Langley of the Smithsonian Institution and of Prof. Andree. He was assisted in his invention by W. D. Custead of Waco, Tex. Andrew Cellie and James Dickie are his financial backers.

While Mr. Whitehead has demonstrated that his airship can fly, he does not claim that it can be made a commercial success. On the other hand, inventor Custead claims he has an airship which can be made valuable for business purposes.

Custead claims to have the most feasible form of airship, but he lacks a generator that is sufficiently light. By a combination of Custead’s airship and Whitehead’s generator the inventors believe that the best airship yet devised will result.

This new generator promises great things if the claims of the inventor are fulfilled. He says it is capable of producing enormous power. Whitehead claims that his motor will decrease by 75 per cent the weight of any motor at present in use.

The complete motive power, including generator and engine, will weigh about five pounds to the horse-power. This includes fuel for 24 hours.

Whitehead’s flying machine is about 16 feet long and its general appearance is that of a huge bat. From each side of the body there are wings made of bamboo poles and covered with muslin. These wings are 36 feet from tip to tip.

There is also a steering apparatus. There are two engines, one of 10 horse-power, to run the machine along the ground, and the other of 20 horse-power, used to work the propellers in flying.

“When I want to fly I start the deck engine and gain a sufficient momentum on the ground and then turn the power to the upper engine, which runs the propellers or wings.

“As soon as the big wings, which measure 36 feet from tip to tip, begin to move, the machine rises in the air at an angle of about six degrees. The machine is 16 feet in length and tapers to both ends.

“At the stern there is a contrivance similar to a bird’s tail. This is intended for regulating the ascent or descent of the machine.

“The present machine weighs about 300 pounds. It is rough, and when I build my new one it will weigh many pounds lighter than this one.

“Instead of using bamboo poles for the ribs, as I have done in this one, I shall in my new machine use seamless steel tubing for the ribs, and for the wings use silk instead of muslin.

“Last Tuesday night I selected as the time to fly my machine. I had tried her three times before with ballast in her and she worked all right, so I felt confident that I could fly in her.

“With one of my assistants in the machine with me, and the other one and the newspaper representative following on bicycles, I started the machine from the house out the Fairfield Road for the flying place.

“Along the good pieces of road I speeded the machine up to 20 miles an hour, but as the wheels under her are only board wheels and but a foot in diameter, the obstructions in the road made her rock when going at such a rate of speed.

“I am confident that with pneumatic-tired wheels under her I can run 50 miles an hour on the ordinary macadamized road.

“We arrived at the flying ground about 2 o’clock in the morning. There was a fair moon and we could see well enough to unfold the wings and get the machine in shape for the trial.

“I selected a long stretch of fields sloping slightly to the north. First I tried the machine with two bags of sand in for ballast. Each bag weighed 110 pounds.

“About 4 o’clock, as the sun was beginning to show itself in the east, I got ready to take my first fly in the machine.

“I was a little nervous, I admit, but I felt eager to fly. I felt sure that my machine would not fail me. I took out the bags of ballast. Then we tied two ropes to the under part of the machine for my two assistants to hold fast to and not let the machine get away from them. When everything was ready I took my position in the. machine and turned the power into the deck engine.

“The machine started ahead nicely, and when she had gained sufficient momentum I shut off the power in the deck engine and started the propeller engine. As soon as the wings began to flop, her nose raised in the air. I was considerably lighter than the two bags of ballast, and the machine rose faster.

“There was a terrific humming of the wind through the wings and other parts of canvas, and the engine made considerable noise, too.

“I was now about forty feet above the ground and sailing along evenly. But I saw with considerable apprehension that I was headed straight for a clump of trees. I was not high enough to sail over them, and I couldn’t get the steering apparatus to work just then.

“In fact, I had not had occasion to try it before. To hit those trees meant wrecking the machine and perhaps death or broken bones for me. A man thinks fast when he gets into a place like that.

“When I was within fifty yards of the trees, and my assistants below on the ground were yelling at the tops of their voices to ‘look out for the trees,’ it suddenly came into my mind that I had seen the birds in their flight tip one wing lower than the other when turning out of a straight line.

“Immediately I shifted my weight to the left of the center of equilibrium. The machine turned its nose to the left and sailed around the clump of trees like a swallow. I had no need for steering apparatus now, and I felt more secure. I tried steering by shifting my weight from side to side, and the machine proved most sensitive to my slightest movement.

“I had gone fully half a mile now, and ahead of me about 200 yards the open field ended with a big woods. I prepared to descend. Here is where I became apprehensive again, for many machines at the point where the wings are stopped do not settle horizontally, but dive ahead or fall tail downward to the ground. I shut off power by degrees, and the machine settled slowly on a perfectly horizontal plane to the ground, scarcely jarring me when the wheels struck the earth.

“The best that has been done in the past in getting motive power has been seven and eight pounds to the horse­power. This means so much weight that it is impossible for the machine to fly.

“My entire motor power, which includes two engines, the generator and 20 pounds of calcium carbide for fuel, which amount is sufficient for 20 hours of flight, weighs only between four and five pounds per horse-power.”

The First Flight Commemorative Half Dollar Coin shows with artist’s images of Mr. Whitehead and front and rear views of his bat-like flying machine, circa 1901. 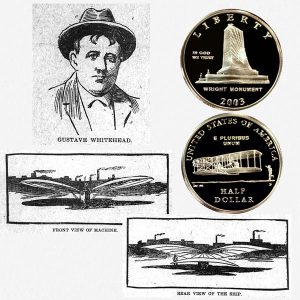