Today, the Guam U.S. Territories Quarter remembers the events leading to the raising of the American flag over the island on February 1, 1899.

From The Island of Guam by the United States Navy published in 1917:

Guam under the United States.

Owing to the remoteness and isolation of Guam the inhabitants heard little of the negotiations between the United States and Spain preceding the Spanish-American War and were totally unaware of the declaration of war.

The last mail steamer that visited the island about the middle of April, 1898, brought advices that the trouble between the mother country and the Americans was in a fair way toward settlement.

It was therefore with some degree of curiosity, but not with any feeling of fear, that the authorities sighted on the morning of June 20, 1898, in front of Agana four vessels flying the American flag, of which one, at least, was a warship.

The vessels in question were the cruiser Charleston, commanded by Capt. (afterwards Rear Admiral) Henry Glass, United States Navy, escorting three transports with troops proceeding to the assistance of Admiral Dewey at Manila.

The Charleston steamed into the harbor and opened fire on Fort Santa Cruz, which the Americans had been informed was the principal defensive work of the harbor.

As a matter of fact, the fort had been abandoned, and no shots were, of course, returned. It was reported to the governor that the Charleston was saluting the port, but later on, the true identity of the mission of the Charleston having been determined the inhabitants, at least the poorer and more ignorant classes, began migrating to the bush, as they had been informed by the Spaniards that the Americans were savages, and that they might expect all sorts of ill treatment at their hands.

Shortly after the ships were sighted the captain of the port, an officer of the Spanish Navy, and the army doctor went to Piti with the object of making the usual boarding call on the approaching vessels if they were intending to call at Apra.

From Piti they took a boat and proceeded out to the Charleston, which was already in port.

When on board they were much surprised to learn that war existed between the United States and Spain, and were directed to return to Agana and request the governor of Guam to surrender the island and his command to Capt. Glass within 24 hours.

The visitors on their way from Piti met a lieutenant of artillery with a detachment dragging behind them two small field pieces.

The officer in command informed them that he had been ordered to Piti to reply to the salute of the American vessel. He was then informed that no salute was necessary, as the firing of the Charleston had been with hostile intent.

On the morning of the following day, June 21, 1898, the governor, Don Juan Marina; the captain of the port, Francisco Garcia Guttier- rez; Dr. Don Jose Romero; and the governor’s aide, Don P. M. Duarte, in compliance with the demand of Capt. Glass, proceeded to Piti where they were met by Lieut. Braunersreuther of the Charleston in command of the landing force from that vessel.

They there surrendered and were taken out and placed on board one of the transports as prisoners of war.

Capt. Glass also called for the surrender of the troops in Guam, about 110 in number, who were composed of Spanish marines and a force of insular artillery.

On June 21 the troops surrendered at Piti to the American forces and were made prisoners with their commanding officer and lieutenant.

The Spanish soldiers were carried away as prisoners of war, but Capt. Glass contented himself with disarming the insular force. The Charleston and convoy sailed the same day for Manila.

His commission, however, not being in writing, was not recognized by the remaining Spanish officials in the island, and the treasurer, Don Jose Sisto, assumed charge of the administration.

For several months this state of virtual anarchy continued.

On January 1, 1899, the collier Brutus came into port and the officer in command, Lieut. Commander (now Rear Admiral, retired) Vincendon L. Cottman, United States Navy, was appealed to by both factions. He decided that the legitimate governor was Jose Sisto.

The Brutus remained in port until the arrival, on February 1, 1899, of the cruiser Bennington, whose commanding officer, Commander (now Hear Admiral, retired) Edward D. Taussig, United States Navy, took formal possession of the island in the name, of the United States and hoisted the American flag over the palace at Agana.

In the interval between the capture by Capt. Glass and its formal occupation by Commander Taussig, the future status of Guam was considered by the United States to be assimilated to that of the Philippine Islands and dependent upon the final decision as to the disposal to be made of those islands.

Its excellent harbor and strategic position, lying as it does very nearly on the great circle between Honolulu and the Straits of San Bernardino, made it at once desirable as a base for the United States Navy.

In pursuance of this order the island was formally taken over by Commander Taussig.

Early in the spring of 1899 the President of the United States, on recommendation of the Secretary of the Navy, commissioned Capt. Richard P. Leary, United States Navy, as governor of Guam, and directed him to proceed to that island and establish therein “the Naval Government of Guam.”

The U. S. S. Yosemite was designated a station ship and fitted out with Capt. (now Rear Admiral, retired) George E. Ide, in command, and sailed from the navy yard, New York, on May 10, 1899, with Capt. Leary on board.

On the day the Yosemite sailed President McKinley and a party, including Capt. Robley D. Evans and other officers, and Miss Helen Gould (now Mrs. Finley J. Sheppard) visited and inspected the ship and crew.

After an uneventful voyage across the Atlantic and stops made at Gibraltar, Port Said, Colombo, and Singapore, the Yosemite reached Manila about the middle of July.

The stop in Manila was short, and, sailing for Guam, that island was reached on the 7th day of August, 1899, nearly three months after leaving the United States.

After formally taking over the island, Capt. Taussig appointed Mr. Joaquin Perez in charge of the affairs of the island, with the title of “commissioner.”

The Bennington then sailed.

On the morning of March 1, 1899, the collier Nanshan, in command of Ensign (now Commander) L. A. Kaiser, United States Navy, arrived with orders to take charge of the affairs of Guam pending the arrival of a duly appointed governor.

Ensign Kaiser recalled the appointment of Don J. Perez and appointed as acting governor one William Coe, a half-breed Samoan, who arrived on the island subsequent to the departure of Commander Taussig.

Coe remained in charge until the arrival of Capt. Leary.

The Guam U.S. Territories Quarter shows with an image of Edward D. Taussig. 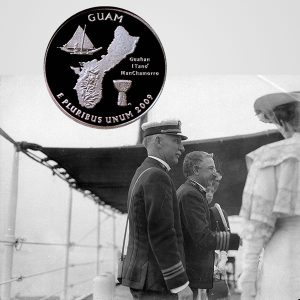