Today, the New York State Quarter Coin remembers when the first commercial power flowed from the Niagara on August 26, 1895.

The Cataract Company Now Sending Out Electricity for Commercial Use.

Niagara Falls, Aug 26. — After almost five years of work and the expenditure of over $3,000,000, Niagara has finally been harnessed, and the power generated by the monster 5,000-horse power dynamos of the Cataract Construction Company are now sending out the electricity for commercial use.

The first power was delivered to the works of the Pittsburgh Reduction Company here at 7:30 o’clock this morning when dynamo No. 2 in the Construction Company’s power house was set in motion.

At the Reduction Company’s works there were about a dozen men at work, and the pots used in the making of aluminum are being tested by them.

A much larger force will be employed tomorrow, when the real work begins.

The power from the power house is sent over copper cables laid in a conduit to the aluminum works.

The current sent out is an alternating one, and before it can be used in the making of aluminum it must be transformed to a direct current.

This is done by passing through four of the largest rotary transformers ever built.

These are 2,100-horse power each, and three of them are running.

Everything was found to work perfectly, and great satisfaction was expressed by the officers.

From Moody’s Manual of Railroads and Corporation Securities, published in 1910:

Incorporated in 1886, in N. Y., and has authority by special acts of Legislature to use the water of Niagara River, and to transmit any power, heat or light developed from such water to points in New York State.

Its hydraulic works include 7,436 feet of tunnel extending from its power houses to level of river below the Falls, and having an hydraulic and electrical installation of more than 100,000 h. p.

The company owns about 1,050 acres of land in Niagara Falls, N. Y., devoted to sites for factories using its power, and controls a terminal switching railway throughout all its lands, and an industrial village for employees of its power users, and also owns controlling interest in its distributing companies.

A plant on the Canadian side of the river has been constructed by the Canadian Niagara Power Co., in Queen Victoria Niagara Falls Park, designed for development of about 110,000 h. p., in which five 10,000 h. p. generating units are now installed and a sixth unit of 12,500 h, p. is now in progress of installation.

Of the combined output of these plants, about 130,000 electric h. p. and 7,500 h. p. leasehold hydraulic rights are now yielding revenue.

The New York State Quarter Coin shows with an image of one of the Niagara Falls power houses. 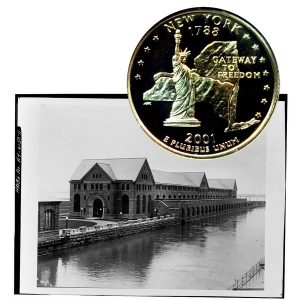