From A Political Manual for 1866 and 1867, Of Executive, Legislative, Judicial, Politico-military, and General Facts, from April 15, 1865 to April 1, 1867, and Including the Development of the Presidential and the Congressional Plan of Reconstruction, with the Pecularities of Each, by Edward McPherson, published in 1867:

Whereas, the Congress of the United States did, by an act approved on the nineteenth day of April, one thousand eight hundred and sixty four, authorize the people of the Territory of Nebraska to form a. constitution and State government, and for the admission of such State into the Union on an equal footing with the original States, upon certain conditions in said act specified;

And whereas, said people did adopt a constitution conforming to the provisions and conditions of said act, and ask admission into the Union;

And whereas, the Congress of the United States did, on the eighth and ninth days of February, one thousand eight hundred and sixty-seven, in mode prescribed by the Constitution, pass a further act for the admission of the State of Nebraska into the Union, in which last-named act it was provided that it should not take effect except upon the fundamental condition that within the State of Nebraska there should be no denial of the elective franchise or of any other right to any person by reason of race or color, excepting Indians not taxed, and upon the further fundamental condition that the Legislature of said State, by a solemn public act, should declare the assent of said State to the said fundamental condition, and should transmit to the President of the United States an authenticated copy of said act of the Legislature of said State, upon receipt whereof the President, by proclamation, should forthwith announce the fact, whereupon said fundamental condition should be held as a part of the organic law of the State, and thereupon, and without an further proceeding on the part of Congress, the admission of said State into the Union should be considered as complete;

And whereas, a duly authenticated copy of said act of the Legislature of Nebraska has been received by me:

Now, therefore, I, Andrew Johnson, President of the United States of America, do, in accordance with the provisions of the act of Congress last herein named, declare and proclaim the fact that the fundamental conditions imposed by Congress on the State of Nebraska to entitle that State to admission to the Union have been ratified and accepted, and that the admission of the said State into the Union is now complete.

In testimony whereof I have hereto set my hand, and have caused the seal of the United States to be affixed.

Done at the city of Washington, this first day of March, in the year of our Lord one thousand eight hundred and sixty-seven, and of the independence of the United States of America the ninety-first.

A week later, an article from the Nebraska Advertiser of March 7, 1867:

Nebraska a State in the Union.

Last Friday Nebraska was declared a State in the Union by Proclamation of the President, Gen. Thayer having arrived on Thursday and delivered to the President the assent, officially signed, of the State Legislature to the condition demanded by Congress.

Thus Nebraska became the thirty-seventh Stale in the Union, despite the howl of disappointed “spoil hunters” of “unauthorized” legislation, “usurpation,” etc., against the State Legislature. The whole proceeding of admission has been wise and provident to the people of Nebraska, and their gratitude is due to the members who voted for our admission.

Closely allied to our admission is the judicious disposal of the Public Institutions for the establishment of which the General Government has made such generous donations. These should never be located to gratify sectional prejudice or partisan spirit, but with an eye to the general welfare and prosperity of the whole Territory and the Institutions; some should be centrally located, because of easy access and protection needed, others need not such location, because their great benefit would draw all they would get anyhow; thus, who would desire to live near to or send a member of the family or a relative to the Penitentiary, and who would not desire to do these very acts in the case of a State University? The Institutions which will foster and build themselves up need not a central location, but the reverse is the case with those of an opposite character.

Now that Nebraska is a State these matters should be speedily settled so that valuable lands may be secured for the endowment and building of these Institutions, for which purpose we, doubt not, Gov. Butler, in his wisdom, will convene the State Legislature within three months from the date of cur admission.

The Nebraska State Quarter Coin shows with an image of Andrew Johnson, circa 1865. 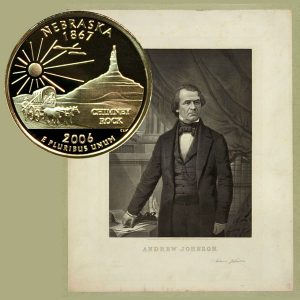