From Battles and Sketched of the Army of Tennessee by Bromfield Lewis Ridley, published in 1906:

I quote by permission from General French’s journal to give a proper idea of General Johnston’s army where the battle of Kennesaw Mountain and all along the line near Marietta took place.

June 19th — “The position of our army today is Hood’s (corps) on our right, covering Marietta on the northwest. From his left, Polk’s corps (now Loring’s) extend over both Big and Little Kennesaw Mountains with the left on the road from Gilgal Church to Marietta.

From this road Hardee extends the line nearly south, covering Marietta on the west. The left of my division was established on the Marietta road, thence it ran up the spur or incline of the Mountain called Little or West Kennesaw and thence to the top of the same; thence on up to the top of Big Kennesaw when it connected with General Walthall’s troops.

Featherstone was on the right of Walthall and joined General Hood. Walker of Hardee’s corps was on my left. Then in order, Bate, Cleburne and Cheatham came.

Kennesaw Mountain is about four miles northwest of Marietta. It is over two and a half miles in length and rises abruptly from the plain solitary and alone to the height of perhaps seven hundred feet. Its northwestern side is rocky and abrupt but on the northerly and southerly extremities it can be gained on horseback.

Little Kennesaw being bold and destitute of timber, affords a commanding view of all the surrounding country as far as the eye can reach except where the view is hidden by the higher peak.

The view from the elevation embraces Lost Mountain, Pine Mountain and all the beautiful cultivated plain dotted here and there with farm houses and extending to the Allatoona Mountain, a spur of the Great Smoky Mountains of North Carolina.”

The two armies confronted each other without incident until the 27th, when General French reports that:

This morning there appeared great activity among the Federal staff officers and generals all along and up and down the lines. The better to observe what it portended, I and my staff seated ourselves on the brow of the mountain sheltered by a large rock that rested between our guns and those of the enemy while my infantry line was farther in front but low down the mountain sides.

Artillery firing was common at all times on the line but now it swelled in volume and extended down to the extreme left. And then from fifty guns the firing burst out simultaneously in my front while battery after battery following on the right, disclosed a general attack on our entire line.

Presently and as if by magic there sprang from the earth a host of men and in one long waving line of blue, the infantry advanced and the battle of Kennesaw Mountain began.

I could see no infantry of the enemy on my immediate front, owing to the woods at the base of the mountain and therefore directed the guns from their elevated position to enfilade the blue line that was advancing on Walker’s front in full view.

In a short time this flank fire down their line drove them back and Walker was relieved from the attack.

We sat there perhaps an hour enjoying a bird’s-eye view of one of the most magnificent sights ever allotted to man — a hundred and fifty thousand men arrayed in the strife of battle below. ‘Twere worth ten years of peaceful life, one glance at their array.

Better an hour on this mountain top
Than an age on a peaceful plain.

As the infantry closed in, the blue smoke of the musket marked out the line of battle while over it rose in cumuli clouds, the white smoke of the artillery.

So many were the guns concentrated to silence those three guns of ours on the mountain brow behind us, so incessant was the roar of the cannon and explosion of shells passing our heads or crashing on the rocks around us, that naught else could be heard; and so with a roar as constant as Niagara and as sharp as the crash of thunder with lightning yet in the eye, we sat in silence watching the changing scenes of this great panorama.

Through the rifts of smoke, or as it was wafted aside by the wind, we could see the assault made on Cheatham. There the struggle was hard and there it lasted longest.

From the fact that I had seen no infantry in my front and heard no musketry near, I thought I was exempted from the general infantry attack.

I was therefore surprised and awakened from my dream when a courier came to me about 9 o’clock and said that General Cockrell wanted assistance, that his line had been attacked in force.

General Ector was at once directed to send two regiments to report to him. Soon after a second courier came and reported an assault made on the left of my line. I went immediately with the remainder of Ector’s brigade to Cockrell’s assistance, but on reaching him I found the Federal assault had been repulsed.

The assaulting column had struck Cockrell’s works near the center, recoiled under the fire, then swung around into a steep valley, where exposed to the fire of the Missourians in the front and right and of Sears’ Mississippians on their left, it seemed to melt away or sink to the earth to rise no more.

The assault on my line repulsed, I returned to the mountain top, The intensity of the fire had slackened and no movement of troops was visible. Although the din of arms yet resounded far and near the battle was virtually ended.

From prisoners and from papers and diaries found in their possession, I learned that my line, from its position, had been selected for assault by General McPherson, as that of Cheatham’s and Cleburne’s had by General Thomas.

General McPherson was a distinguished officer and it would be a reflection on his judgment and skill as a general to infer that he did not, under the eye of his commander and with ample men and means, make what he deemed adequate preparations for its accomplishment; but owing to the ground and the determined resistance encountered, his men by intuitive perception awakened by action, realized that the contest was hopeless and where persistence was only death, very properly abandoned the field.

General Cheatham’s loss was 195; mine (French’s) 186; all other Confederate losses 141. Being a total of 522. What the Federal loss was I do not know but it was estimated at from five to eight thousand.”

The following orders of General Sherman will explain the attack clearly; and the telegrams the result of the battle.

Headquarters Military Division of the Mississippi,
In the Field, Near Kennesaw Mountain, June 24, 1864.

The army commanders will make full reconnaissance and preparations to attack the enemy in force on the 27th inst., at 8 a. m. precisely.

The commanding general will be on Signal Hill and will have telegraphic communication with all the army commanders.

1. Major-General Thomas will assault the enemy at any front near his center to be selected by himself and will make any changes in his troops necessary, by night, so as not to attract the attention of the enemy.

2. Major-General McPherson will feign, by a movement of his cavalry and one division of his infantry on his extreme left, approaching Marietta from the north and using artillery freely but will make his real attack at a point south and west of Kennesaw.

3. Major-General Schofield will feel to his extreme right and threaten that flank of the enemy, etc.

4. Each attacking column will endeavor to break a single point of the enemy’s line and make secure lodgment beyond and be prepared for following it up toward Marietta and the railroad in case of success.

General Schofield: — Neither McPherson nor Thomas has succeeded in breaking through but each has made substantial progress at some cost. Push your operations on the flank and keep me advised.

W. T.Sherman, Major-General Commanding,
Headquarters Military Division of the Mississippi,
In the Field, Near Kennesaw, June 27, 1864, 11:45 a. m.

General Thomas: — McPherson’s column marched near the top of the hill through very tangled brush but was repulsed. It is found impossible to deploy but they hold their ground. I wish you to study well the positions and if possible to break through the lines to do it. It is easier now than it will be hereafter. I hear Leggitt’s guns well behind the mountain.

As nothing decisive was obtained by Sherman’s attack, the fire slackened except on skirmish line.

After dark the enemy withdrew to their main trenches, the roar of guns died gradually away and the morning of the 28th dawned on both armies in their former positions.

The battle of Kennesaw then was a display of force and an attack on the entire length of our line by artillery and infantry under cover of which two grand attacks were made by assaulting columns, the one on my line and the other on Cheatham’s.

This fight along Cheatham’s line was what was called the “Dead Angle.” On the right of Cheatham was Stewart who was highly entertained by a number of the enemy’s batteries turning on one of his, trying to silence it.

It was during this battle that one of the noblest deeds of humanity was performed. Colonel W. H. Martin of the First Arkansas of Cleburne’s division seeing the woods in front of him on fire and burning the wounded Federals, tied a handkerchief to a ramrod and amidst the danger of battle mounted the parapet and shouted to the enemy: “We won’t fire a gun till you get them away. Be quick.”

And with his own men he leaped over our works and helped to remove them. When this was done, a Federal major was so impressed by such magnanimity that he pulled from his belt a brace of fine pistols and presented them to Colonel Martin with the remark, “Accept them with my appreciation of the nobility of this deed.”

The Civil War Commemorative Silver Dollar Coin shows with an artist’s image of the Battle of Kennesaw, June 27, 1864. 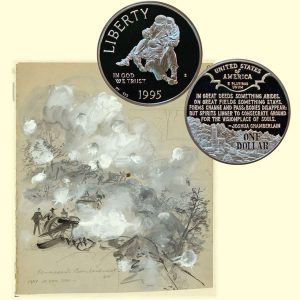