Today, the Baseball Commemorative Half Dollar Coin remembers the first home run in the new organization on September 10, 1858.

From America’s National Game, Historic Facts Concerning the Beginning, Evolution, Development and Popularity of Base Ball, with Personal Reminiscences of Its Vicissitudes, Its Victories and Its Votaries by Albert Goodwill Spalding, published in 1911:

Twenty-five clubs were represented at this convention by three delegates each, and the business transacted was of great importance to the future of Baseball.

Hitherto the game had been controlled as to its playing rules largely by local prejudices. It was played under one set of rules in New York and another in New England, and other still widely different regulations were applied to the game elsewhere.

In New York, batsmen were out on balls caught on the first bound: in New England, base runners were out by being “soaked” by thrown balls, and everywhere a batsman might wait all the afternoon for a strike ball, he alone being the judge of what he would strike at.

The organization of the National Association of Baseball Players, in 1858, therefore marked a new era in the history of the game, for it was then that there was put in operation for the first time a code of rules, framed by a special committee of the new association for that express purpose.

The officers elected in 1858, when the National Association of Baseball Players was formed, were: President, William H. Van Cott, of the Gothams; First Vice-President, L. B. Jones, of the Excelsiors; Second Vice-President, Thomas S. Dakin, of the Putnams; Recording Secretary, J. Ross Postley, of the Metropolitans ; Corresponding Secretary, Theodore F. Jackson, of the Putnams; Treasurer, E. H. Brown, of the Metropolitans.

It will be observed that the Knickerbockers, despite their former greatness, had already begun to fade away. Representatives from that club were conspicuous by their absence in the official roster of the new association. Practical politics had entered the game.

The first season after the organization of the National Association of Base Ball Players saw several series of remarkable games between picked nines representing the foremost clubs of New York and Brooklyn.

Prior to these contests, the regular matches of each recurring season had attracted assemblages numbering only a few hundreds; but these games, inviting local partisanship, proved to be great drawing cards, bringing out the largest crowds ever seen at ball games up to that year.

The contests were held on the Fashion Race Course, on Long Island, during July, August and September of 1858. The first of the series of three games was played on July 20th.

On account of the expense incurred in putting the grounds in order — and it was very poor order at that — an admission fee of 50 cents was charged.

This was the first game of Baseball on record where gate money was demanded and received from spectators.

The difficulty of reaching the grounds was considerable. Most of those in attendance came by small steamer from the Fulton Ferry to Hunter’s Point, and thence by the Flushing Railroad to the Fashion Course.

This, of course, materially lessened the numbers of the crowd. Nevertheless, nearly 1,500 people saw the game, a great throng for those days.

Then the New Yorks struck a streak of luck and in the next three innings added thirteen to their score, to six added by the Brooklyns, showing a score at the end of the sixth of 16 to 13 in New York’s favor.

In the last three innings the Brooklyns made five runs to six for the New Yorks, the final score showing New York 22, Brooklyn 18.

Something of the nature of the game played at this time may be known from the fact that of the 27 Brooklynites put out 13 were out on balls caught on a first bound, while the New Yorks lost 14 on similar catches.

Eleven bases were made on passed balls, charged to Brooklyn’s catcher, while New York’s catcher lost only two.

The second match of the New York-Brooklyn series took place on August 19th. On this occasion the Brooklyns had considerably strengthened their nine.

As in the former game, Brooklyn took the lead in the start; but, unlike the previous game, the New Yorks failed to rally successfully.

At the close of the sixth innings the Brooklyns led, 22 to 6, and at the end of the game were easy victors, having made 29 runs to 8 by their adversaries.

Another month elapsed before the final contest to decide the winner of two out of three matches came off.

The date was September 10.

By this time a widespread interest in the result had sprung up in both cities, and something of the spirit of local partisanship which characterizes league games at the present time was apparent.

The crowd in attendance upon this event was the largest that had ever been seen on a ball field, numbering several thousands.

In previous matches players from all the different clubs from each city were in the game; but in the final struggle, six players from the Atlantics and three from the Eckfords were on the Brooklyn team, while representatives from all of New York’s quartet of clubs participated.

The fight for supremacy in this game was very bitter.

Both teams were on their mettle, every player feeling that the future welfare of the city represented by him depended upon the result.

But it was apparent early in the game that the New Yorks were that day the better nine, and at the end of the ninth innings the score was 29 to 18 in favor of the boys from the big city.

In this game, a total of 27 men were out on balls caught on the first bound.

In the entire contest no bats man was retired on strikes.

During the three games only one home run was made, and on this run “hangs a tale” told by the late Henry Chadwick, in these words:

“Two Brooklyn cranks had a wager of $100 a side on John Holden’s making a home run. One was an Atlantic rooter, the other an Excelsior fan. In this game I noticed that when Holden went to bat he was very particular in selecting his bat. It appears that the man who had bet on him went to him and told him that he would give him S25 of his bet if he made the hit; so Jack was very anxious. Matty O’Brien was pitching, and Jack, after waiting for a good ball, got one to suit him, and sent it flying over Harry Wright’s head at right center, and made the round of the bases before the ball was returned, thus winning the $25.”

Aside from the story itself, this tale is interesting as showing that already, almost at the inception of the playing of match games between organized teams in rival cities, betting on the result, which was to make so much for mischief in the future, was beginning to be in evidence.

The Baseball Commemorative Half Dollar Coin shows with an image of the Eckford baseball club of Brooklyn in 1858. 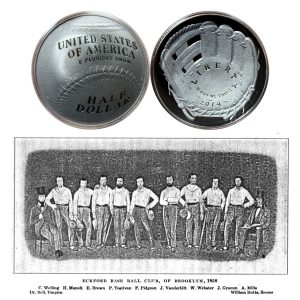