Today, the District of Columbia Quarter Coin remembers when Congress receded the area acquired from Virginia back to the state on July 9, 1846.

Excerpt from the article by Frederick L. Fishback, District of Columbia and Its Government, printed in the National Magazine, Volume XLI: October, 1914 to March 1915:

The first Act of Congress, dated July 16, 1790, providing for the permanent seat of government on the Potomac, required that it should be located between the Eastern Branch of the Potomac and the Conogocheague Creek which flows into the Potomac at Williamsport, Maryland, about twenty miles north of Harpers Ferry, that interesting historical and scenic spot at the junction of the Potomac and Shenandoah Rivers, fifty miles northwest of Washington on the Baltimore and Ohio Railroad.

A second act of Congress, approved March 3, 1791, really after tentative surveys had been made, authorized the three Commissioners who were laying out the Federal District to place the southern point as far south as Jones Point where Hunting Creek flows into the Potomac, at the southern extremity of Alexandria.

By this Act, and it was undoubtedly its purpose, it was possible to place Alexandria, Washington’s market town, in the Ten Miles Square, and the Commissioners made the point of beginning at Jones Point, the southern-most spot which could be selected.

Dr. Elisha Cullen Dick laid the cornerstone of the new Federal District there April 15, 1791. This cornerstone is at the base of the little lighthouse which every tourist from Washington to Mount Vernon by steamer sees on his right at the point of land south of Alexandria.

The land taken was in Prince George and Montgomery counties in Maryland and Fairfax county, Virginia.

On October 21, 1669, Captain Robert Howsen in payment for bringing 120 colonists to Virginia was granted by Governor Berkeley 6,600 acres of land extending along the Potomac from Hunting Creek or as it was then known, Indian Cabin Creek, to a point opposite My Lord’s Island, now Analostan Island, lying between the present city of Washington and the Virginia village of Rosslyn.

Captain Howsen sold his land to John Alexander, who in 1677 sent some settlers to occupy it. The first settlement where Alexandria now is was known as Belle Haven, probably because there was between two points of land at the north and south ends of the settlement a safe harbor for the small vessels of that day.

In 1748, by Act of the Colonial Legislature of Virginia, the formation of the town of Alexandria, so named for the early proprietor of the land embracing it, was authorized.

That part of the present city of Washington west of Rock Creek which is locally still called Georgetown was laid out in pursuance of an Act of the British Province of Maryland of June 8, 1751, twenty-five years before we declared our independence of Great Britain and forty years before the District of Columbia was carved out of Maryland and Virginia.

The small tract which was originally embraced in Georgetown belonged to George Gordon and George Beall, and the town was laid out during the reign of George II.

It does not appear to be known whether Georgetown was named for George II or for the two Georges who owned the land, but it seems probable that it was for the latter.

The Act of Congress approved March 3, 1791, provided that all public buildings at the permanent seat of government on the Potomac should be erected on the Maryland side of the river.

It is easily seen that in the course of time those who lived on one bank of a river nearly a mile wide would tire of contributing to the upbuilding of a city on the other side, and on the demand of those residing in the portion of the District of Columbia which came from Virginia it was receded to that state in pursuance of an Act of Congress approved July 9, 1846.

Since that time the District of Columbia has embraced only 69.245 square miles instead of one hundred square miles as originally laid out.

The boundary line between the District of Columbia and the state of Virginia is at low-water mark on the Virginia shore of the Potomac.

The District of Columbia Quarter Coin shows with a map of Washington, D.C., circa 1846. 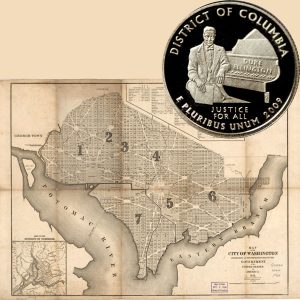