Today, the Half Cent Coin remembers when British ships patrolled near our harbors causing havoc with our trading vessels and on April 25, 1806 their bullying turned deadly.

From The American Merchant Marine, Its History and Romance from 1620 to 1902 by Winthrop Lippitt Marvin, published in 1902:

It seems incredible now, but in 1805 and afterward our merchant vessels were stopped and robbed by British ships of war right in our home waters.

Two frigates, the “Cambrian” and “Leander,” virtually blockaded the port of New York.

One of the “Leander’s” midshipmen was Basil Hall, afterward celebrated as an author. He has left a lively description of the way in which these frigates played the bully at the gates of the chief port of America:

“Every morning at daybreak we set about arresting the progress of all the vessels we saw, firing off guns to the right and left to make every ship that was running in heave to or wait until we had leisure to send a boat on board to see, in our lingo, what she was made of.

“I have frequently known a dozen and sometimes a couple of dozen ships lying a league or two off the port, losing their fair wind, their tide, and, worse than all, their market for many hours, sometimes the whole day, before our search was completed.”

Not only the ship’s papers but private letters were opened and examined by the boarding parties of these swaggering frigates.

If the faintest pretext offered, the ships were seized and sent to Halifax for condemnation.

The presence of these frigates off New York was an insult to the whole country, but it was borne with what now seems to be disgraceful patience or feebleness until one spring evening, April 25, 1806, when the sloop “Richard” from Brandywine for New York, coming up two miles from Sandy Hook Light and a quarter of a mile from the beach, was fired on by the “Leander.”

One shot fell just ahead; the other flew right over.

At this stern summons the coaster immediately hove to.

But a third shot at this moment struck the taffrail and cut off the head of the man at the helm, John Pierce, brother of the captain.

When the “Richard” next morning reached New York, she kindled a flame like that which blazed up out of the red snow of the Boston massacre.

Poor Pierce’s mangled body was laid in state in City Hall, and was soon surrounded by thousands of citizens, cursing Great Britain and demanding vengeance.

The funeral was made a great public demonstration.

The boats of the frigates were chased out of the bay when they came in for supplies, and a few British officers on shore were driven into hiding.

The grand jury indicted the captain of the “Leander” for murder.

New York’s rage was repeated in every town and village where the tragedy of the “Richard” was told.

On May 3 President Jefferson not unwillingly issued a proclamation closing the ports and harbors of America forever to the frigates and their commanders, and ordering the arrest of Captain Whitby, wherever he might be found in United States jurisdiction.

The slaying of this humble Yankee sailor was a bad day’s work for the British navy and the British government.

It did more than all the years of impressment to shock the whole American people into realizing that such an attack upon an American merchant vessel was an attack upon the integrity and honor of the nation.

These things were only dimly perceived in the early years of the nineteenth century.

Patriotism was not then the passion which it has since become.

The Half Cent Coin shows with an artist’s depiction of the Leander firing the shot that killed John Pierce in 1806. 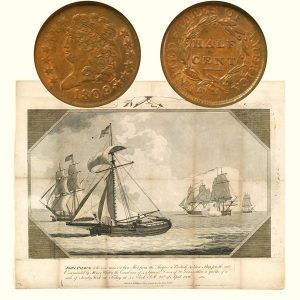