From the History of Hampton Falls, New Hampshire, by Warren Brown, published in 1900:

Washington was inaugurated president on the 30th day of April, 1789, and soon after attended the first session of congress at New York, which closed on the 29th of September. A few days after its close, attended only by his two private secretaries and servants, he left New York on a tour through Connecticut and Massachusetts to New Hampshire.

In nine days he reached Boston and seven days after he arrived in Portsmouth, which was the eastern termination of his tour.

Washington came to Newburyport over Parker river bridge, Friday, October 30, 1789. He left his carriage at the upper green and mounted his favorite white horse.

From here he was escorted by the artillery and militia to Newburyport, where he received an address of welcome written by John Quincy Adams, afterward president of the United States, but at that time a law student in the office of Theophilus Parsons.

He was received and entertained by the people of Newburyport in a manner which was in keeping with one in his exalted station. He passed the night at the Tracy House.

The following is from Washington’s diary, first printed and made public about 1858:

Oct. 30th At this place (Ipswich) I was met by Mr. Dalton and some other gentlemen from Newburyport, partook of a cold collation, and proceeded on to the last mentioned place where I was received with much respect and parade about 4 o’clock. In the evening there were rockets and some other fireworks, and every demonstration to welcome me to the Town. The place is pleasantly situated upon Merrimack River, and appears to have carried on (here and above) the ship building business to a great extent. The number of souls is estimated at 5000.

Saturday Oct. 31st 1789. Left Newburyport a little after eight o’clock (first breakfasting with Mr. Dalton) and to avoid a wider ferry, more inconvenient boats, and a piece of heavy sand, we crossed the river at Salisbury, two miles above and near that further about, and in three miles came to the line which divides the State of Massachusetts from that of New Hampshire. Here I took leave of Mr. Dalton and many other private gentlemen, also of Gen. Titcomb, who had met me on the line between Middlesex and Essex Counties, corps of light horse and many officers of militia, and was received by the President of the State of New Hampshire, the Vice President, some of the Council, Messrs. Langdon & Wingate of the Senate, Col. Parker, Marshal of the State, and many other respectable characters. Besides several troops of well clothed horse in handsome uniforms, and many officers of the militia, also in handsome red and white uniforms of the manufactures of the State. With this cavalcade we proceeded and arrived before three o’clock at Portsmouth, where we were received with every token of respect and appearance of cordiality, under a discharge of artillery. The streets, doors, and windows were crowded as at all other places, and alighting at the town house, odes were sung and played in honor of the President. The same happened yesterday at my entrance at Newburyport, being stopped at my entrance to hear it. From the Town House I went to Col. Brewster’s tavern, the place provided for my residence, and asked the President, Vice President, and two Senators, the Marshal, and Major Gilman to dine with me, which they did, after which I drank tea at Mr. Langdon’s.

Sab. Nov 1st Attended by the President of the State (General Sullivan), Mr. Langdon, and the Marshal, I went in the forenoon to the Episcopal church under the incumbency of Mr. Ogden, and in the afternoon to one of the Presbyterian or Congregational Churches, in which a Mr. Buckminster preached. Dined at home with the Marshal, and spent the afternoon in my own room writing letters.

Monday 2d Having made previous preparations for it, about eight o’clock, attended by the President, Mr. Langdon, and some other gentlemen, I went in a boat to visit the harbor of Portsmouth, which is well secured against all winds, and from its narrow entrance from the sea, and passage up to the town, may be perfectly guarded against any approach by water. The anchorage is good, and the shipping may lay close to the docks, etc., when at the town. In my way to the mouth of the harbor, I stopped at a place called Kittery in the Province of Maine, the river Piscataqua being the boundary between New Hampshire and it. From hence I went by the old Fort (formerly built while under the English government) on an island which is at the entrance of the harbor, and where the lighthouse stands. As we passed this Fort we were saluted by thirteen guns. Having lines we proceeded to the fishing banks, a little without the harbor, and fished for cod, but it not being of proper time of tide, we only caught two, with which, about ten o’clock, we returned to town. Dined at Col. Langdon’s and drank tea there, with a large circle of ladies, and retired a little after seven o’clock. Before dinner I received an address from the town, presented by the Vice President, and returned an answer in the evening, to one I had received from Marblehead, and another from the Presbyterian Clergy of the State of Massachusetts and New Hampshire, delivered at Newburyport,— both of which I had been unable to answer before.

Tuesday 3d Sat two hours in the forenoon for a Mr. ——— painter of Boston, at the earnest request of Mr. Brick of that place, who wrote Major Jackson that it was an earnest desire of many of the inhabitants of that town that he might be indulged. After this sitting I called upon President Sullivan and the mother of Mr. Lear, and having walked through most parts of the town returned by twelve o’clock, when I was visited by a clergyman of the name of Haven, who presented me with an ear and part of the stock of the dyeing corn, and several small pieces of cloth which had been dyed with it, equal to any colors I had ever seen, and of various hues of the same color. About two o’clock I received an address from the Executive of the State of New Hampshire, and in half an hour after dined with them and a large company, at their Assembly room, which is one of the best I have seen anywhere in the United States

At half after seven I went to the Assembly, where there were about seventy-five well dressed and many very handsome ladies. Among them (as was the case at the Salem and Boston assemblies) were a greater proportion with much blacker hair than are usually seen in the Southern States. About nine I returned to my quarters. Portsmouth, it is said, contains about five thousand inhabitants. There are some good houses (among which Col. Langdon’s may be esteemed the first) but in general they are indifferent, and almost entirely of wood. On wondering at this as the country is full of stone and good clay for bricks, I was told that on account of fogs and damp they deemed them wholesomer, and for that reason preferred wood buildings. Lumber, fish, and potash, with some provisions, compose the principal articles of export. Ship building here and at Newburyport has been carried on to a considerable extent; during and for some time after the war there was an entire stagnation to it, but it is beginning to revive again.

Wednesday Nov. 4th About half past seven I left Portsmouth quietly and without any attendants, having earnestly entreated that all parade and ceremony might be avoided on my return. Before ten I reached Exeter, fourteen miles distance. This is considered the second town in New Hampshire, and stands at the head of tide water of Piscataqua river, but ships of three or four hundred tons are built at it. Above (but in the same town) are considerable falls which supply several grist mills, a slitting mill, and a snuff mill. It is a place of some consequence but does not contain more than one thousand in habitants. A jealousy subsists between this town (where the Legislature alternately sits) and Portsmouth, which, had I known it in time, would have made it necessary to have accepted an invitation to a public dinner, but my arrangements having been otherwise made I could not. From Exeter passing through Kingston six miles from Exeter I arrived at Haverhill about half past two. The lands over which I traveled today are pretty much mixed, in places, with stone, and the growth with pines, till I came near to Haverhill, where they disappeared and the land had a more fertile appearance.

We have given Washington’s diary, kept by himself from the time he entered the state until he left it, to show just where he went and how his time was occupied while in the state. There have been many stories told of places visited and things done while in this state, which any one reading this diary can see at once must have been impossible, as his whole time is accounted for.

When leaving Newburyport Washington crossed the Merrimack river at Amesbury ferry in a boat which had been specially fitted for the purpose, thence across the Powwow river through Salisbury point, over Rocky hill, to the New Hampshire line.

Washington makes no mention of Hampton Falls or Hampton in his diary. My grandfather, who was present, told me that the party halted for a short time at Hampton Falls, but where we are unable to say.

It was probably near the Wells tavern and not at the Weare house as many have supposed. Governor Weare had at this time been dead three years. Washington was mounted upon his horse. It was not his custom to shake hands indiscriminately with the crowd as do public men at the present time, but he made it a point to shake hands with those who had been soldiers in the Revolutionary War. A number shook hands with him here, and they were probably soldiers from this town and vicinity.

When passing through Hampton a crowd had gathered at Toppan’s corner, to whom he bowed pleasantly to the right and left. He left his carriage at Greenland and rode into Portsmouth upon his favorite white horse.

He stopped a short time in Exeter and partook of a collation at the house of Colonel Folsom.

There is a well authenticated tradition that about this time he came to Hampton Falls to consult with Governor Weare and remained over night at his house.

The Washington Commemorative Silver Half Dollar Coin shows with an artist’s image of Portsmouth, circa 1780. 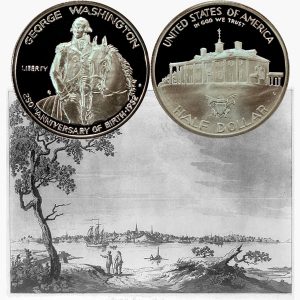