Today, the Daniel Boone Commemorative Silver Half Dollar Coin remembers when the group of men arrived at the Red River on June 7, 1769.

From A History of the Daniel Boone National Forest, 1770-1970 by Robert F. Collins, US Forest Service —Retired, published in 1976:

John Filson, in his famous book, The Discovery, Settlement and Present State of Kentucke, published in 1784, quotes Daniel Boone as describing the start of his initial trip as stating, “It was on the first of May, in the year 1769, that I resigned my domestic happiness for a time, and left my family and peaceable habitation on the Yadkin River, in North Carolina, to wander through the wilderness of America, in quest of the country of Kentucky, in company with John Findley, John Stewart, Joseph Holden, James Mooney and William Cooley.”

Daniel’s brother, Squire Boone, who was also to participate in the trip, had agreed to stay behind and assist the women of both families in planting and harvesting the crops and would follow with fresh supplies, joining the party in Kentucky in the late fall or early winter. This arrangement proved to be most fortunate.

Initially, the route lay through country familiar to Boone and Stewart, through Moccasin Gap, across Clinch Mountain, over Walden’s Ridge and Powell Mountain, then up Powells Valley to Cumberland Gap, beyond which none of them had ever traveled.

On reaching the Powell Valley and approaching Cumberland Gap, Boone’s party, to their surprise, encountered a group of about 20 men, under the leadership of Joseph Martin of Albemarle County, Virginia, busily engaged in the establishment of a settlement.

They had already cleared the ground and were in the process of building cabins and planting corn. This was the settlement enterprise of Dr. Walker, who had traveled through Cumberland Gap and through Eastern Kentucky in 1750.

This settlement, known as Martin’s Station, was to become a well-known stopping point on the Wilderness Road and the last point of civilization before the final plunge through Cumberland Gap and into the wilderness of Kentucky.

As Boone and his companions continued their travel and approached the break in the mountains made famous by Dr. Walker and his party some 19 years earlier, they were impressed with the ruggedness of the mountains on either side of the Gap.

On their right, a sheer cliff loomed some 1,500 feet above them, while a smaller, rounded hill formed the other side of the narrow, v-shaped defile through which their trail led.

As they climbed to the saddle of the Gap which marks the divide between the drainages of the Cumberland and Tennessee rivers, each man must have experienced a thrill at finally entering the fabled land of Kentucky.

This was a particularly significant moment for Daniel Boone, who had dreamed of this visit since his Braddock Army days some 14 years previously.

Now, he would see for himself the wonders of Kentucky. As the little party entered the Gap, they left behind them the last of the country known to any of them. Ahead lay unknown trails.

In 1769, frontiersmen traveling the western mountains were aware of the ancient Indian road used by all of the tribes in traveling the country west of the Blue Ridge, which was called Athawominee, meaning “the path of the armed ones,” or commonly known as “The Warrior’s Path.”

This ancient trail originated at the junction of the Allegheny and Monongahela rivers where they formed the Ohio. It followed the Ohio southward to the mouth of the Kanawha River, then up the Kanawha and along New River, across the divide and down the Clinch, through the Powell Valley and through Cumberland Gap.

It was at this point that Boone and his party first found and traveled the Warrior’s Path.

This trail continued to the vicinity of Es-kip-pa-kith-i-ki, known today as Indian Old Fields, located about 10 miles east of Winchester, Kentucky.

From that point, the Warrior’s Path turned to the northeast, passing near Mt. Sterling, following Slate Creek to its mouth, where it crossed the Licking River and continued northeast to the Ohio River, where it crossed near the present-day city of Portsmouth, Ohio.

From that point, the Warrior’s Path continued north up the valley of the Scioto River and on to Lake Erie.

Boone and his companions crossed through Cumberland Gap and continued on the Warrior’s Path, which followed a meandering creek, whose waters had a yellowish cast from the sulphur picked up as it flowed over the soft coal deposits of the area.

This was Yellow Creek, which would be known to the many travelers of the Wilderness Road in the years ahead.

They continued on the Warrior’s Path, fording the Cumberland River near the present town of Pineville, and continuing on about eight miles to Flat Lick, where Indians had frequently camped in the past to boil the waters to make salt.

At this point, Boone and his friends left the Warrior’s Path following a trail blazed by hunters until they reached the vicinity of the Rockcastle River, where the hunters’ trail turned sharply to the west.

Here, they left the hunters’ trail and turned north through a heavily timbered and broken country which showed no evidence of previous travel by white man or Indians, and which, today, is a part of the Daniel Boone National Forest.

Camping briefly on the headwaters of the Rockcastle River to hunt, they continued, crossing the divide between the Cumberland River drainage and the drainage of the Kentucky River, making camp on what is now Red Lick, a fork of Station Camp Creek.

The campsite and surrounding country appearing desirable, they decided to establish a base camp at this location, construct shelter for themselves and their equipment, and explore the country.

They named the creek Station Camp, as this was to be their operating headquarters or station for some time.

They arrived at this location on June 7, 1769, having been on the trail some five weeks from their start on the Yadkin in North Carolina.

The Daniel Boone Commemorative Silver Half Dollar Coin shows with an image of the WPA mural of “Daniel Boone’s Arrival in Kentucky,” by Ward Lockwood. 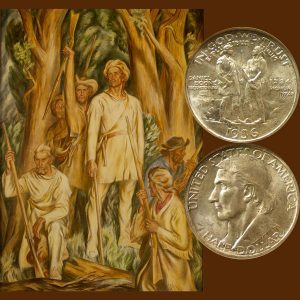