Today, the New Hampshire State Quarter Coin remembers when the people coerced the stamped paper distributor for their area to resign. His formal resignation occurred on September 18, 1765.

From The history of New Hampshire from its discovery, in 1614, to the passage of the Toleration Act in 1819 by George Barstow, published in 1853:

In New Hampshire George Meserve had been appointed stamp distributor. He received his appointment when in England, and soon after arrived in Boston.

The people requested him to resign his office before he landed, September 9, 1765. This he readily did.

They then welcomed him on shore. The news of his coming had preceded him to Portsmouth, and an exhibition of effigies had prepared the minds of the people to receive him.

At his coming they assembled, and he was compelled to make a more formal resignation, on the parade, September 18, 1765, before going to his house.

The stamp act was to commence its operation on the first day of November.

On the last day of October the New Hampshire Gazette appeared with a mourning border, and the next day was ushered in by the tolling of bells, and a mock funeral was made for the Goddess of Liberty.

She is carried to the grave; but on depositing her there, some signs of life are discovered, and she is borne off in triumph, amid the acclamations of the multitude.

Thus did the populace propagate the spirit of independence, while the more moderate and even the most eminent citizens testified their resistance by more discreet but not less decided demonstrations.

Governor Wentworth alone remained silent. With failing health and an ample fortune, and now far in the decline of life, he felt equally averse to putting himself forward in the support of popular measures, or of contradicting openly the voice of the people.

During these commotions, and while it was considered doubtful whether courts of law could enforce their decrees without the use of stamped paper, a few licentious persons endeavored to excite a general opposition to the payment of debts.

No sooner did this disorderly spirit manifest itself, than associations were formed at Portsmouth, Exeter, and all the principal towns, to support the magistrates in compelling obedience to the courts and enforcing the obligations of contracts.

This spirit of disorder was soon quelled. Thus did the people show that, though resisting oppression, they had within themselves the elements of virtue and order.

It was soon suspected, notwithstanding the resignation of Meserve, that he intended to distribute stamped paper.

Instantly the drums beat, and the Sons of Liberty were assembled. They then compelled him to deliver up his commission, which was put on board a ship, then ready to sail, and sent to England.

It happened to arrive just at the time when the parliament had heard of the commotions in America, and when a strong effort was making by the friends of America to repeal the stamp act.

A change had taken place in the British ministry, and the new ministers, among whom were the Marquis of Rockingham, the Duke of Grafton, and General Conway, were more favorable to the Americans.

The petition of congress and other papers were before them.

Dr. Franklin had been examined before the house of Commons, and had given it as his opinion that America would never submit to the stamp duty unless compelled by force of arms.

“My position,” said William Pitt, “is this — I repeat it: I will maintain it to my last hour: — Taxation and representation are inseparable. This position is founded on the laws of nature; it is more — it is in itself an eternal law of nature; for whatever is a man’s own, is absolutely his own: no man has a right to take it from him, without his consent; whoever attempts to do it, attempts an injury; whoever does it, commits a robbery. I am of opinion that the stamp act ought to be repealed, totally, absolutely, and immediately.”

The repeal passed the Commons, and the cause of America having found an advocate in the person of Lord Camden, it prevailed in the house of Lords, and was finally repealed.

The New Hampshire State Quarter Coin shows with an image of one newspaperman’s view of the stamped paper, circa 1765. 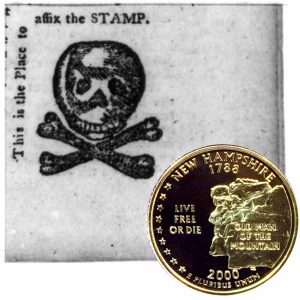