Today, the Maryland Tercentenary Commemorative Silver Half Dollar Coin remembers when William Claiborne obtained from King Charles a license to trade on May 16, 1631.

From The History of North America Volume IV, The Colonization of the Middle States and Maryland by Frederick Robertson Jones, Ph.D., published in 1904:

The little colony was soon to experience trouble from a quarter where it should have least expected it. Virginia thought its rights had been invaded by the charter which the king had granted Lord Baltimore. In consequence, as St. Mary’s grew and gave promise of prosperity, the enmity of some Virginians increased almost in direct proportion.

Then, again, they objected to the proximity of what they termed “Popish” settlements, and were likewise jealous of the privileges of the free trade with foreign ports which had been granted to the new colony but had been denied them.

Virginia’s jealousy and animosity for twenty years centered around the claim of one man — William Claiborne’s claim to Kent Island. It has been said by many historians that Virginia had established settlements under the authority of Claiborne before the charter was granted to Baltimore.

That consequently, as the country granted to Baltimore was previously settled by Claiborne, the former’s grant was void.

“But it seems,” says Bozman (History of Maryland, i, 263), “to be extraordinary, that although history recognizes this objection as being frequently made, yet it furnishes no authentic proof of the fact on which it is founded.”

Claiborne had first gone out to Virginia as a surveyor to the Virginia colony in 1621, “to survey the planters’ land and make a map of the country.”

He acquired much real property, and after the revocation of the Virginia charter became a member of the Council. He was likewise appointed secretary of state for Virginia by the commission which appointed Sir John Harvey governor whenever the place should be made vacant.

While secretary, Claiborne had a fine opportunity for accomplishing his designs. He had, in the meantime, embarked on several commercial enterprises. He had been in the habit of carrying on a trade with the Indians along the shores of the Chesapeake, and Virginia gave him authority later to explore and make discoveries along that bay.

It was in connection with this traffic that he acted as agent for a firm of London merchants, Cloberry and Company. This authority thus conferred upon him by Virginia gave him even better opportunities for enriching himself.

It appears that he established trading posts along the northern part of the bay. The first was probably on the Isle of Kent.

When, in 1629, Lord Baltimore visited Virginia, he, it may be presumed, mentioned his intention of obtaining a grant along the Chesapeake.

Claiborne was probably alarmed at this project, for his trading posts were in this territory and any settlements he had made he considered to be under Virginia authority.

Claiborne, therefore, obtained from King Charles, May 16, 1631, a license “to trade in all seas, etc., in or near about those parts of America.”

For the more effectual execution of this license, command was also given to the governor to permit Claiborne and his company “freely to repair and trade to and trade in all the aforesaid parts, as they should think fit and their occasion should require.”

Claiborne secured this license by representing to Sir William Alexander, the king’s secretary of state for Scotland, that he wished to promote a trade between New England, Nova Scotia, and Virginia.

About ten months afterward, Claiborne applied for a commission from Harvey, Governor of Virginia, “to sail and traffic unto the adjoining plantations of the Dutch seated upon this territory of America.”

A commission was granted him on March 8, 1632. By it he was authorized to trade with the Dutch and English plantations, and, in fact, wheresoever he desired.

By the same commission, all representatives of the English government were ordered to render him any assistance within their power.

It is quite obvious, from these two commissions, that neither mentions specifically or even refers in definite terms to any plantations or settlements, or to any traffic in the Chesapeake.

It would seem, then, that if Claiborne had formed any settlements on the Isle of Kent or at the mouth of the Susquehanna, they were unauthorized settlements made under his license to trade and make discoveries in the Chesapeake.

When Lord Baltimore visited Virginia, it did not occur to him that these were really authorized settlements.

Nor did it occur to him that they would be brought forward as objections when he should apply for a charter.

Consequently, when he applied for this charter after returning to England, he was probably honest when he represented the territory as hitherto unsettled.

We have already referred to the fact that shortly after Baltimore’s grant the planters of Virginia sent a petition to the king, which was acted upon in the Star Chamber, July 3, 1633.

It was decided that Lord Baltimore should remain in possession of this grant and that the planters “be left to their remedies at law, if they had such.”

No doubt Claiborne took an active part in having this petition presented to the king.

Although he had received a license to trade, this gave him no “right to the soil or to any jurisdiction over it.”

Nor could he support his title on the ground of prior occupancy. His license from the king went no further than a permission to trade, which might have been granted to a citizen of a foreign State.

Claiborne had, it is true, established a trading post on an island to which he gave the name Kent Island instead of Winston’s Island as Captain John Smith had named it.

Here he erected some buildings — the capital being furnished by the London merchants.

For lack of support by these merchants and by reason of fear of the Indians, the post was almost upon the point of extinction when the Maryland colonists established themselves at St. Mary’s.

The Maryland Tercentenary Commemorative Silver Half Dollar Coin shows with an artist’s image of William Claiborne. 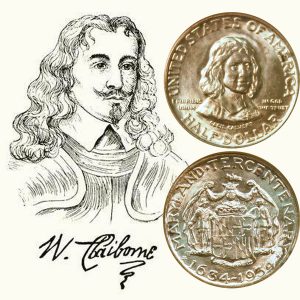