Today, the Massachusetts State Quarter Coin remembers when the gentleman digging a foundation on July 30, 1631 found French coins with the earliest date of 1596.

From the American Journal of Numismatics of July 1870:

To the Editors of the Journal:

I notice in the last number of the Journal, in the table of the weights of the cents of 1793, that I, by a strange oversight, neglected to give that of one of my own.

I now, to supply the deficiency, send you the weight of that specimen, 12 K, which is 204 grains.

I have recently obtained a cent of the variety 1 B, (according to the plate in the Journal for April, 1869,) weighing 221 grains; which is not only much heavier than any of that variety previously found, but exceeds the weight of any other given in the table referred to.

“Mr. Ludlow, in digging the foundation of his house at Dorchester, found two pieces of French money: one was coined in 1596. They were in several places, and a foot within the firm ground.”

In a note upon this, Savage says,

“Perhaps no reader will expect, that the occasion of these coins being lodged here should be satisfactorily ascertained; yet I may be pardoned for offering a conjecture, that they came from a French ship, wrecked at Cape Cod about fourteen years before, whose crew were soon murdered by the savages, except three or four, that were ‘kept and sent from one sachem to another to make sport with them.’

“Two were redeemed by Dormer, about three years after their calamity, and one died among the Indians, having lived with them long enough to give them some instruction. See Morton’s Memorial, sub an. 1620: and Prince i, 45, relying for his narrative on Bradford and Purchase. Hubbard, 134, plants some scattering inhabitants, a few years before, at Dorchester ; but I know not any proof of such settlement, except these pieces of money. As he, again, p. 186, positively asserts it, we may consider it probable.”

Hoping that the future of the Journal may become as successful in a financial, as I am confident it will remain in a literary, point of view, I am very respectfully, S. S. Crosby.

In Nathaniel Morton’s New England’s Memorial of 1669, the following description of the fate of the French sailors:

These things were partly the reasons why the Indians kept aloof, as aforesaid, and that it was so long ere they could come to speech with any of them.

Another reason (as afterwards themselves made known) was, how that about three years before these first planters arrived, a certain French ship was cast away at Cape Cod, but the men got on shore, and saved their lives, and much of their victuals and other goods.

Two of the said French so used were redeemed by the afore said Mr. Dermer, the other died amongst the Indians; and as the Indians have reported, one of them lived amongst them until he was able to discourse with them, and told them, that God was angry with them for their wickedness, and would destroy them, and give their country to another people, that should not live like beasts as they did, but should be clothed, etc.

But they derided him and said, that they were so many that God could not kill them.

His answer was, that though they were never so many, God had many ways to destroy them that they knew not.

Shortly after his death came the plague, a disease they never heard of before, and mightily swept them away, and left them as dung upon the earth (as you have heard).

Not long after came the English to New Plimouth, and then several of the Indians began to mind the Frenchman’s words, thinking him to be more than an ordinary man.

And as the first part of his speech had proved true, they began to be apprehensive of the latter, namely, the loss of their country.

This relation the first planters at Plimouth, after they came to be acquainted with them, several of them heard from divers of their ancient and gravest Indians, and have often seen the place where the French were surprised and taken; which place beareth the name of Frenchman’s Point with many to this day.

This relation, for the verity thereof, being also very observable, was thought meet to be here inserted, and let me add a word hereunto; that it is very observable likewise, that God hath very evidently made way for the English, by sweeping away the natives by some great mortalities; as first, by the plague here in Plimouth jurisdiction; secondly by the smallpox in the jurisdiction of the Massachusetts, a very considerable people a little before the English came into the country; as also at Connecticut, very full of Indians a little before the English went into those parts; and then the Pequots by the sword of the English (as will appear in its place) and the country now mostly possessed by the English.

I might also mention several places in the jurisdiction of New Plimouth, peopled with considerable companies of proper able men, since the first planters thereof came over, even in our sight, before they were in a capacity to improve any of their land, that have by the same hand of Providence been cut off, and so their land even cleared for them, and now so replenished with their posterity, that places are too strait for them.

By little and little (saith God of old to his people) will I drive them out from before thee, till thou be increased, and inherit the land, Exod. xxiii. 28-30.

The Massachusetts State Quarter Coin shows with an image of early French ecú coins, though not as early as 1596. 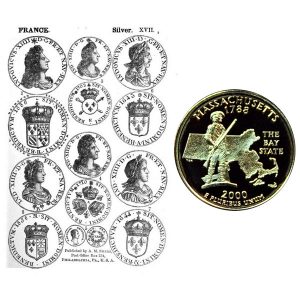