Today, the Pilgrim Tercentenary Commemorative Silver Half Dollar Coin remembers the first duel in the new Pilgrim colony and the resulting punishment on June 18, 1621.

From The Journal of the Pilgrims at Plymouth, Reprinted from the Original Volume, edited by George B. Cheever, published in 1848:

All the transactions of the colony described in the earliest and most authentic records show the Plymouth Pilgrims to have been as kind, patient, persevering, and judicious a set of men as the Providence of God ever collected in one community.

They manifested great qualities both of mind and heart, of natural temperament and piety. They maintained a very natural superiority over all the successive settlements of New England, not merely because theirs was the great honor of pioneers in suffering, but because, though in some after emigrations there was greater dignity of circumstance, yet there was never better stuff, nor equal endurance.

They were upright, generous, manly in character and sentiment. There was a stamp of natural nobleness, openness, and courage, as well as constant reliance upon God.

They were above every meanness and had a pure and high morality, and though in an obscure, unthought of theatre, so acted in all things, that now, when their whole stage with all the scenery and persons is lifted into light with a world critically gazing at it, there is nothing seen but what is as noble and truly dignified as if it had been acted for the world.

The reason is, because it was not acted for the world, but irrespective of the world, for conscience and for God. The total absence of the fear of man has produced the noblest epic in action of all secular ages.

The very first instances of crime among them being imitations in low life of English court bravery and gentility, were such as stamped disgrace and ridicule upon it for all coming time.

It was good to have examples of fashionable wickedness put in so low and contemptible a setting as that to which the Pilgrims shut it up, when the foundations of many generations were building.

It was better than the device of the Spartans to make their slaves drunk that their children might abhor the beastly vice of intemperance.

Neck and heels of a serving man tied together is a good posture for the perpetual effigy of a New England duellist.

If the Pilgrims had set their ingenuity to manufacture a caricature of affairs of honor for immortal opprobrium and ridicule, they could not have done better.

It was only the second offence in the whole year’s history of the colony.

“June 18, 1621. The second offence is the first duel fought in New England upon a challenge at single combat with sword and dagger, between Edward Doty and Edward Leister, servants of Mr. Hopkins. Both being wounded, the one in the hand, the other in the thigh, they are adjudged by the whole company to have their head and feet tied together, and so to lie for twenty-four hours, without meat or drink: which is begun to be inflicted, but within an hour, because of their great pains, at their own and their master’s humble request, upon promise of better carriage, they are released by the Governor.”

We should like to see all the duellists in the world tied thus, neck and heels together; honor to whom honor is due.

This punishment seems to have been very effectual. It was used in the case of the first offence committed in the colony, which was that of John Billington, a profane, miserable wretch, “shuffled in” by some unaccountable trickery among the Pilgrims at London, but who afterwards was hung for murder.

March 24th 1621, he was “convicted before the whole company for his contempt of Captain Standish’s lawful command with opprobrious speeches: for which he was adjudged to have his neck and heels tied together; but upon humbling himself and craving pardon, and it being the first offence, he is forgiven.”

Governor Bradford, with an almost prophetic discernment of the elements of character and their consequences, declared in a letter to Mr. Cushman in 1624, concerning this miserable fellow, who for some cause was a great enemy of Cushman, that he was “a knave, and as such would live and die.”

It was the Governor’s opinion that he was smuggled in most improperly among the Pilgrims in England, at their first embarkation, but how he knew not. He stained the soil of New England with the first murder, being truly the Cain of that Eden of the New World.

Mr. Hubbard gives the account of his unprovoked crime and its just retribution, in the following words;

“About September, 1630, was one Billington executed at Plymouth, for murder. When the world was first peopled, and but one family to do that, there was yet too many to live peaceably together; so, when this wilderness began first to be peopled by the English, when there was but one poor town, another Cain was found therein, who maliciously slew his neighbor in the field, as he accidentally met him, as himself was going to shoot deer.

“The poor fellow, perceiving the intent of this Billington, his mortal enemy, sheltered himself behind trees as well as he could for a while; but the other not being so ill a marksman as to ruin his aim, made a shot at him, and struck him on the shoulder, with which he died soon after.

“The murderer expected that either for want of power to execute for capital offences, or for want of people to increase the plantation, he should have his life spared; but justice otherwise determined, and rewarded him, the first murderer of his neighbor there, with the deserved punishment of death, for a warning to others.”

The trial of this murderer was a most important occasion.

The colony were somewhat in doubt whether the patent gave them authority in cases of life and death to pass and execute judgment. They might deduce that authority from their own compact, but they were anxious to proceed legally as well as justly, in right form as well as in reality.

They sought the advice of their brethren in Massachusetts, the case occurring in the same year with the arrival of Governor Winthrop and the company of colonists along with him.

Governor Winthrop in his journal merely mentions the execution thus: “Billington executed at Plymouth for murdering.”

But it appears from Hutchinson, who, as Mr. Savage remarks, has perhaps digested all that can be known in regard to that trial, that Mr. Winthrop, having consulted with the ablest gentlemen there, concurred with the opinion at Plymouth that the man ought to die, and the land be purged from blood.

This was founded on the divine command, “Whosoever sheddeth man’s blood, by man shall his blood be shed; which was not, in any case, to be dispensed with.”

Hutchinson remarks that they observed all the forms of law, there being both grand jury and petty jury impanelled, and after indictment, verdict, and sentence, the criminal was executed.

They took their authority and obligation of punishment by death for the crime of murder directly from the Word of God, regarding the old ordinance given to Noah as of universal appointment for the guidance of mankind.

The Pilgrim Tercentenary Commemorative Silver Half Dollar Coin shows with an image of a duel with daggers and swords from the play Monbars, circa 1887. 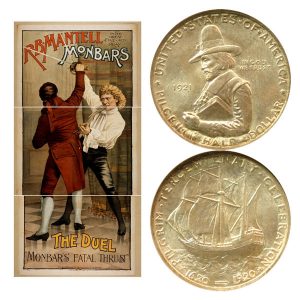