Did you know that platinum is an element on the periodic table with chemical symbol Pt and atomic number 78? The name platinum comes from the Spanish phrase platina del Pinto which translates to “little silver of the Pinto River.”

Of course, you can find platinum in numismatics in both coins and bullion metals. Platinum can also be found in jewelry. Interestingly, people allergic to other jewelry metals are often not allergic to platinum. Perhaps more important to the market, platinum can be used in a variety of existing and new technological industries.

Let’s look at how platinum has performed in the market over the last year. 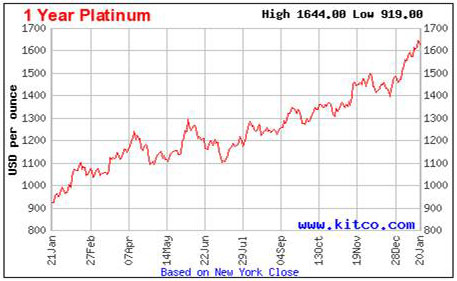 As with any market, there are peaks and valleys even as the price moves upward. However, platinum doesn’t appear to have quite the same volatility as gold to the vagaries of the economic climate. 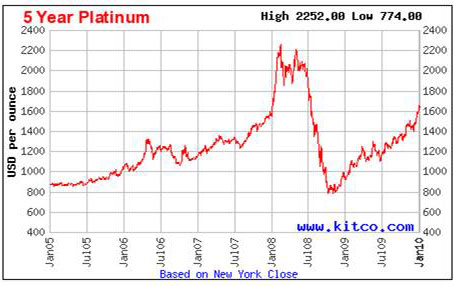 Wait, that’s a big dip in 2008 that gold didn’t experience. But, most of the market collapse can be explained by the car manufacturers dumping a large part of their hoarded reserves of platinum. What would have happened to the market’s upward climb if they hadn’t sold such a large amount?

Look what happens to gold, now and historically, any time the dollar weakens or the economy becomes stressed. People turn to gold as their investment of choice and as a hedge against losing their investments. Perhaps people continue to think of gold as having monetary value even though our monetary system is no longer tied to gold.

However, what about platinum? Could it be that platinum has more consistent and longer term value?

Take a look at this article: The Rise and Rise of Platinum in 2010. Now, the author only mentions platinum being used for catalytic converters for cars but that shortchanges the many uses of platinum around the world today.

Platinum does not corrode, it acts as a catalyst, it melts at over 3000 degrees Fahrenheit, and it conducts extremely well. Those characteristics make it widely desired in manufacturing equipment and processes, as a catalyst in many chemical reactions, in a variety of electronics, for helping with petroleum refinement and in chemical and electrical situations where high temperatures are needed. That list, too, shortchanges the many and varied uses of platinum.

But, platinum can be difficult to find. Depending on the information source, gold can be found in three to six ppb (parts per billion) in the earth’s crust. On the other hand, platinum is found in .003 ppb. This means platinum requires much more ore (and mining of that ore) to yield the same amount of pure material as does gold. This speaks to the difficulty and the rarity of finding platinum

Perhaps platinum coins and bullion could be an interesting investment.

As one article stated, “platinum has three important things going for it – it’s rare, valuable and in demand.”

What is platinum used for?

Is it better to invest in gold or platinum?