Today, the Lincoln Wheat One-Cent Coin remembers when President Wilson fixed the price of copper on September 20, 1917 upon the agreement of the producers and the war industries board.

The efforts to cover the country in electricity had already increased the need for copper, but with World War I raging, both the American and Allied forces needed the metal to support their fighting soldiers.

The Arizona Republican newspaper of September 21, 1917 included an article describing the price fix:

Copper Price Fixed Twenty-Three and Half Cents Per Pound

Copper prices were fixed today at 23 1/2 cents a pound, about three cents below the prevailing market by agreement between the government and leading copper producers, effective for four months.

Sales to the government, the public and the allies will be at this price, f. o. b. New York and producers agreed not to reduce wages now paid in the industry. They also pledge themselves to maintain maximum production and to prevent copper from falling into the hands of speculators.

Although the price is fixed under voluntary agreement between producers and the government’s war industries board, with the president’s approval, it was announced officially that under the executive war power, “the proper departments of the government will be asked to take over the mines and plants of any producers who fail to conform to the arrangement and price.”

Recent government purchases of copper for war purposes have been made under agreement to pay the price to be determined by the war industries board. Early in the war, when copper sold at about 36 cents, the government contracted for 45,000,000 pounds for the army and navy at 16 2-3, but future contracts will be at the new rate.

The price agreed upon today was set after extensive investigation of production costs by the federal trade commission. The commission’s report was understood to have indicated that copper could be sold profitably at a much lower price than 23 1/2 cents but in reaching its decision the war industries board, headed by Frank A. Scott, took into consideration that the price should not be pared down to the point where production would be discouraged or wages reduced.

“Three important conditions were imposed by the board,” said an announcement. “First, that the producers would not reduce the wages now being paid; second, that the operators would sell to the allies and to the public at the same price paid by the government and take the necessary measures, under the direction of the war industries board, for the distribution of copper, to prevent it from falling into the hands of speculators who would increase the price to the public; and third, that the operators pledge themselves to exert every effort to keep the production of copper at the maximum so long as the war lasts.”

Without the wage stipulation, it was explained, present wages, the highest ever paid in the copper industry, would be reduced by the new under-market price.

“Within the last year,” said the statement, “copper has sold as high as 36 cents per pound and the market price would now be higher than it is had it not been well known for some weeks that the government would fix the price.

“The principal copper producers throughout the country have evinced an admirable spirit and for weeks have promptly supplied every request of the government for copper without waiting decision as to price, agreeing to accept the price which the board should fix.

The Lincoln Wheat One-Cent Coin shows with an image inside a copper mine, circa 1916. 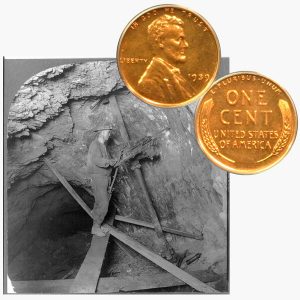