Today, the White House Commemorative Silver Dollar Coin remembers when President Theodore Roosevelt decided his new home should be called the “White House” on all official documents 117 years ago.

From the Kalispell, Montana newspaper, The Kalispell Bee of October 12, 1901:

The New Name Which President Roosevelt Has Officially Given His Washington Home.

President Roosevelt has taken a new departure which will startle the old timers in Washington.

The “executive mansion” has been doomed and the “White House” has officially taken its place.

President Roosevelt’s first social step has been to change all this. The official stationery now is headed “The White House” and invitations to dine are dated from “The White House,” and not the “executive mansion.”

The president’s reasons for the step are both characteristic and natural. There are under ordinary circumstances about 45 “executive mansions” in this country, one in each state, but only one “White House.”

It is the desire to perpetuate the name officially which is historically and conveniently correct that has induced Mr. Roosevelt to make this change.

Some of the old timers in Washington, particularly those who pride themselves on their pedigree and love the lordly sound of the word “mansion,” are objecting already to the innovation, but the “plain people” or those who have heard of the change like it and commend the president for the unflinching Americanism of the whole proceeding.

From the Grand Rapids Wood County Reporter of October 17, 1901:

Executive Mansion a Term Tabooed by the President.

Washington —Hereafter all letters to the president of the United States should be addressed the white house, instead of the executive mansion.

President Roosevelt has decided in favor of the historic name, principally in order that it shall be distinctive.

The capital of every state has its executive mansion, while for the time the president’s home was established at Washington there has been but one white house.

The president has ordered the change made on all stationery to be used by himself and his subordinates at the white house, and all linen, silverware and china hereafter purchased by Mrs. Roosevelt’s orders will be similarly marked.

From the Salt Lake City Deseret Evening News of October 22, 1901:

President Roosevelt has returned to the use of “White House” in preference to “Executive Mansion.”

But the practice in this regard has been by no means uniform.

President Grant and every President since him have used the term “Executive Mansion” as did Lincoln.

But Johnson who came In between employed at least three designations for the place from which his public papers came—”Executive Chamber,” “Executive Mansion,” and “Executive Office.”

On May 1, 1865, he transmitted a message to the Senate and House bearing the headline “Executive Chamber, Washington City.”

Three days later he wrote under the heading “Executive Mansion, Washington,” in announcing the funeral of the late President Lincoln at Springfield, Illinois and ordering the various departments closed at noon.

On November 11 he used the term “Executive Office” in an official communication.

But in the minds of the people the term “White House” identifies the President’s official home as nothing else does.

The White House Commemorative Silver Dollar Coin shows with an image of the President Roosevelt’s home, circa 1901. 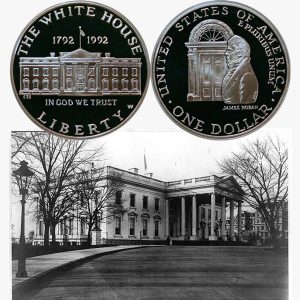