Today, the George Washington Commemorative Silver Half Dollar Coin remembers the term of Thomas Mifflin and one of his most important speeches.

In hindsight, perhaps his most notable act occurred on December 23, 1783 when he and the United States in Congress Assembled received General Washington’s resignation at Annapolis, Maryland.

Sir, The United States in Congress assembled, receive with emotions too affecting for utterance, the solemn deposit resignation of the authorities under which you have led their troops with safety and triumph through a long perilous and doubtful war.

When called upon by your country to defend its invaded rights, you accepted the sacred charge, before it had formed alliances, and whilst they were it was without funds or a government to support you.

You have conducted the great military contest with wisdom and fortitude, invariably regarding the fights of the civil government power through all disasters and changes.

You have, by the love and confidence your fellow-citizens, enabled them to display their martial genius, and transmit their fame to posterity.

You have persevered, till these United States, aided by a magnanimous king and nation, have been enabled, under a just Providence, to close the war in freedom, safety, and independence; on which happy event, we sincerely join you in congratulations.

Having defended the standard of liberty in this new world: having taught a lesson useful to those who inflict, and to those who feel oppression, you retire from the great theatre of action, loaded with the blessings of your fellow-citizens; but your fame the glory of your virtues will not terminate with your official life the glory of your many virtues will military command, it will continue to animate remotest posterity ages and this last act will not be among the least conspicuous.

We feel with you our obligations to the army in general, and will particularly charge ourselves with the interests of those confidential officers who have attended your person to this interesting affecting moment.

We join you in commending the interests of our dearest country to the protection of Almighty God, beseeching him to dispose hearts and minds of its citizens to improve the opportunity afforded them, of becoming a happy and respectable nation.

And for you we address to him our earnest prayers, that a life so beloved may be fostered with all his care; that your days may be as happy as they have been illustrious; and that he will finally give you that reward which this world cannot give.

The George Washington Commemorative Silver Half Dollar Coin shows beside a portrait of Thomas Mifflin. 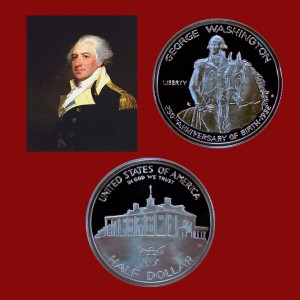