Today, the Puerto Rico Territory Quarter Coin remembers when the Spanish military exited the island after transferring assets to the United States on October 18, 1898.

On the 25th of the same month Congress, by formal act, declared “that a state of war then existed and had existed since the 21st of April, 1898, between the United States of America and the Kingdom of Spain.”

Immediately the armies and fleets of the United States were set in motion and hostile military operations against Spain were commenced in both hemispheres.

On the 25th day of July the advance of the army destined for the conquest of Porto Rico seized one of the ports of that island, and within three weeks about one-third of the area of the island had been forcibly occupied by the American troops.

On the 12th of August, 1898, the ambassador of France, acting by authority of Spain as the temporary representative of the King, and the Secretary of State of the United States, as representative of the President of the United States, agreed upon the terms of a peace protocol, which became immediately effective in causing a cessation of hostile operations.

It provisions, as applicable to Porto Rico, were as follows, viz:

ART. II. Spain will cede to the United States the Island of Porto Rico and other islands now under Spanish sovereignty in the West Indies.

Orders were immediately sent to the general commanding the United States troops in Porto Rico directing that all hostile military operations be discontinued.

These orders were received by the general in command on the 13th of August, 1898, and the opposing forces at once suspended hostile operations, retaining temporarily their respective positions and territorial control.

The evacuation commission provided for Porto Rico by the protocol consisted of the following-named officers as representing the Government of the United States:

They met at San Juan with a similar commission appointed by the King of Spain, at the head of which was Gen. Ricardo Ortega, of the Spanish army.

The first meeting of the joint commission was held on the 17th of September, 1898, and daily sessions were held there after until the 18th of October following, when the whole island having been occupied by the United States troops the American members submitted their final report to the President of the United States.

The dates upon which the American forces occupied the principal ports were as follows:

The Spanish forces defending Porto Rico at the time of the invasion numbered some 12,000 troops, including volunteers and partially organized militia.

The latter and all local volunteer organizations were subsequently disbanded, the members resuming their ordinary avocations, while the regular troops of Spain were embarked for the Peninsula.

The last to sail took their departure on the 18th of October, 1898.

Under the terms of the protocol all side and small arms, regimental property, military records, field artillery, and national vessels were retained by Spain, but all fixed and immovable property, such as siege and seacoast artillery, with their ammunition and mounts, were surrendered to the United States, as were also the fortifications, barracks, hospitals, storehouses, and magazines.

Careful inventories were made and exchanged by the commissioners of all armament and public property, except land, acquired by the United States.

The Spanish commissioners claimed the right under the protocol of removing the siege guns and appurtenant material, but the right was denied by the American members, and the guns remained.

On the 18th of October the military control of the whole island of Porto Rico and its adjacent islets and keys passed from Spain to the United States, and the command of the troops, by assignment of the President, devolved upon Maj. Gen. John R. Brooke, U. S. Army, who had also been the president or chairman of the American evacuation commission, and who, by virtue of such assignment, became the military governor of Porto Rico.

The aggregate strength of the United States military forces in Porto Rico at the time of cessation of hostilities was about 10,000, officers and men.

These numbers were somewhat increased shortly after August 14 by the arrival of organizations previously en route.

Immediately after hostilities ceased, however, the army of occupation was greatly reduced by the withdrawal and muster out of volunteers, so that on October 18 the total force in Porto Rico, including the sick, was about 4,500 men of all arms.

The Puerto Rico Territory Quarter Coin shows with an artist’s image of San Juan, circa 1900. 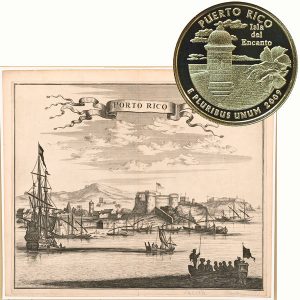