Today, the New Mexico State Quarter Coin remembers when they dedicated the new capitol building in Santa Fe on June 4, 1900.

First, the Governor’s Report gave high-level information while a history of New Mexico listed more details about the area.

From the Report of the Governor of New Mexico to the Secretary of the Interior, 1901:

On June 4, 1900, the new capitol building, at Santa Fe, was dedicated with appropriate ceremonies, and by the beginning of the fiscal year 1901 all Territorial officials were installed in the quarters provided for them.

The secretary is given three commodious, well-furnished office rooms, with steam heat and electric lights, and a large fireproof vault, in addition to storage rooms in the basement.

As a result the general business is conducted with ease and dispatch, while the records, files, engrossed laws, and other valuable papers are stored in safe and convenient receptacles.

Appropriate halls, with suitable committee rooms, are set apart for the use of the two bodies of the legislature, and this has resulted in a saving in such items as rent, fuel, water, and furnishings, formerly provided at the expense of the General Government.

From the History of New Mexico, Its Resources and People by George B. Anderson, Pacific States Publishing Co, 1907:

During the winter following the occupation of Santa Fe by the American troops an adobe fort and blockhouse was erected on the northern heights of the town, and named in honor of Secretary of War Marcy.

The earthworks are still standing, under which were buried 200 Missouri volunteers of the Mexican war.

On the road to Fort Marcy is what is known as the Garita, an old Mexican fort, near the west wall of which the leaders of the revolution of 1837 were executed — those concerned in the assassination of Perez and other provincial officials.

The palace, on the plaza, witnessed the assembling of the first territorial legislature, and in 1848 the treaty of peace with Mexico was proclaimed within its walls.

Santa Fe was established as the territorial seat of government, July 14, 1851, and became the official residence of the governors.

For about a month — in March and April, 1862 — it was in possession of the Confederate troops, the Union forces reoccupying it April 11th.

The old palace was abandoned by Governor Otero as an executive residence upon the completion of the first territorial capital.

It was not until 1884 that practical plans were entered upon for the construction of a modern capitol building.

By act of March 14, 1884, provision was made for the erection of a territorial penitentiary at Santa Fe, at a cost not exceeding $150,000, the governor, the attorney general and the treasurer being constituted a board of managers for the institution, which was completed in the following year.

On the day following the appropriation for the penitentiary an attempt was made to pass a measure appropriating $300,000 for a new capitol.

This action excited great indignation throughout the Territory.

People outside of Santa Fe were almost unanimously against the measure, which was condemned as an attempt on the part of the “Santa Fe ring” to bleed the taxpayers for their personal benefit.

Charges were made that the legislature was organized and managed in furtherance of a deliberate scheme to raid the public treasury for the benefit of the few.

A memorial was sent to Congress asking for an investigation and mass meetings of citizens were held in many places.

The opposition to the bill in the legislature was led by Major William H. Whiteman, representing Bernalillo county in the house.

The opposition, while it did not prevent the passage of the measure, succeeded in reducing the original amount of the appropriation.

The bill, which was passed March 28, 1884, created a bonded indebtedness of $200,000 against the Territory, and appointed as capitol building committee the governor of the Territory and his successor in office, together with the following named: Mariano S. Otero, Narciso Valdez, William L. Rynerson, Jose Montano, Antonio Abeytia y Armijo, Ramon A. Baca, Vicente Mares, John C. Joseph, Cristobal Mares, Lorenzo Lopez, Rafael Romero and A. S. Potter.

The cost of the capitol in round numbers was $250,000. It was built of yellow sandstone.

In 1886 the legislature met for the first time in the new capitol, and six years later, May 12, 1892, the building was burned, presumably at the hands of an incendiary. There was no insurance, but most of the records were saved.

February 5, 1895, a capitol rebuilding board was established by act of the legislature, and after much delay the new capitol was completed and dedicated June 4, 1900.

The present capitol, of similar design to the first, is built of cream colored brick upon a granite foundation, crowned with a tasteful dome, and was completed at a cost of $200,000.

When It First Became the Capital. —

The appearance of Santa Fe is thus described in “Mayer’s History of New Mexico,” which was published in the year of the territorial organization and shortly before Santa Fe was formally established as the capital:

“Santa Fe is an irregular, scattered town, built of adobes, or sun-dried bricks, while most of its streets are common highways traversing settlements interspersed with extensive cornfields. The only attempt at anything like architectural compactness and precision consists of four tiers of buildings, whose fronts are shaded with a fringe of rude partales or corridors. They stand around the public square, and comprise the palacio, or governor’s house, the custom house, barracks, calabozo, casa consistarial, the military chapel, besides several private residences, as well as most of the shops of the American traders.”

In the early days following the American occupation there was a very bitter feeling of prejudice against the Americans, and they were in constant danger of assault from Mexicans, who would frequently pitch stones from the roofs of the adobe houses onto the heads of the hated “Gringoes.”

All Americans carried “six-shooters” and bowie knives, according to Charles L. Thayer.

In 1850 there was three times as much land under cultivation by the Mexicans as now.

The American military force of occupation was large, and everything was bought in the open market at enormous prices — corn at $25 per fanega (about two and a half bushels), wheat at about the same price, and hay at $60 per ton.

Money was extremely plentiful and times were prosperous.

The New Mexico State Quarter Coin shows with an image of the new capitol dedicated June 4, 1900. 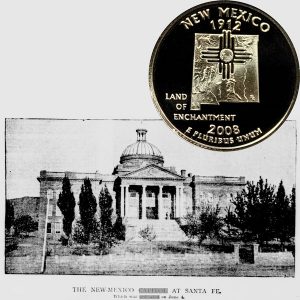