Sidney, N. S., Oct. 17. — Wireless communication across the Atlantic for news and business purposes was begun today in accordance with the promise of Marconi, the inventor.

From 2 o’clock in the afternoon on there was a constant exchange of messages between the station at Glace Bay, Nova Scotia, and the one at Clifden, Ireland.

Numerous press dispatches were sent to and fro. The system seemed to work with reasonable efficiency. There was no hitch or delay, and although the maximum speed promised was not reached, dispatches were transmitted at a rate of twenty words a minute, it was said.

The great enterprise was started without formality of any sort. Indeed the circumstances were depressing, for Mr. Hankyn, one of the experts who has aided Signor Marconi in perfecting the plant, was lying nearby between life and death, stricken with pneumonia. The chances of his recovery are very small.

It was on this account that the festivities which were to have marked the event were cancelled at the last hour. There were present, however, numerous newspaper men and some scientists, guests of Signor Marconi.

The first message sent in opening the new service was from Sir Wilfrid Laurier, Premier of Canada, congratulating the English people on the new achievement of science, which means to the people of today what the laying of the first Atlantic cable did to those of a generation ago.

The message was addressed to the London Standard, and was relayed from the Irish coast to London on the inland telegraph lines. After the transmission, of the first eastward message and English dispatch to Canada was received and the station was declared formally open.

Numerous press dispatches were forwarded to England. Among those received were congratulations from the Lord Mayor of London, Sir J. C. Bell, the Duke of Argyll, and the Canadian High Commissioner, Lord Strathcona and Mount Royal.

Several hundred private messages were offered at both ends, but the company refused to accept any but press dispatches today.

This afternoon about 4 o’clock Mr. Marconi told The Sun correspondent that transatlantic wireless telegraphy was a grand success.

No definite information could be secured by the newspaper men themselves. No one was admitted into the operating room. All had to be content to watch through a window the operator sending and all the time they were present they did not see any receiving done.

A correspondent handed the following message to the wireless people for transmission to the Times, London:

“Greetings to the people and press of England from the Marconi wireless.”

So far no reply has been received. A newspaper man tendered the following message to his correspondents in London:

“What time did you receive this message?” but the Marconi people could not receive the same for transmission, saying it was a test message and that they would not be able to make fast time today owing to the stress of business.

Upon arriving at the station at 2 o’clock the party of newspaper men were met by Mr. Vyvyan, the chief engineer of the Canadian Marconi Wireless.

They were conducted first to the boiler room, where five batteries of boilers, three of which were of 100 and two of 150 horsepower, were found.

The dynamo is of English make and was running at a voltage of 2,000, but Mr. Vyvyan explained that this did not come up to its full capacity, inasmuch as none of the engines was running at full power and there were only two of the batteries of boilers working.

From the boiler room the party went to the masts. There are four large towers and twenty-four masts.

The towers are distant about 200 feet from each other and are 245 feet high. On top of the towers floated the flags of England, Canada, Italy and the United States.

The aerial wires are strung from mast to mast and are composed of bronze. Only eight of the masts were used today.

Just as the party arrived the wires began to crack and from inside the building great tongues of flame about a foot in length began to dart.

These were separated into dot and dash intervals and a noise like deep bass organ notes fell on the ear.

The wires fairly hummed, so great was the potentiality. The flames were of a white bluish color.

The operator sent very slowly, and so far as the correspondents could make out everything worked well. Relays of ten minutes sending and then ten minutes receiving was the order of business.

Mr. Johnston operated the sending key for the first relay.

The key was the ordinary Morse kind and the Continental code was used. The receiving is done by means of a telephone receiver, which the operator places on his head.

The new receiver lately invented by Marconi is a great improvement over the old magnetic detector.

Marconi said that over 10,000 words had been received and sent today and not a single word had to be repeated.

He had been so busy all day that he was sorry he could not give the newspaper men a better reception.

The Liberty “V” Nickel Coin shows with an image of Marconi, circa 1908. 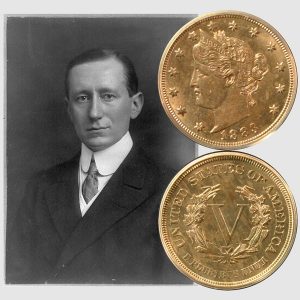