Today, the West Point Commemorative Silver Dollar Coin remembers when a young cadet saw a meteor shower outside his window on the morning of November 12, 1833.

That young cadet became a professor who continued to observe the night sky for meteors and meteorites.

From The London, Edinburgh, and Dublin Philosophical Magazine and Journal of Science of January 1842:

Proceedings of the American Philosophical Society

June 18, 1841. — Mr. Walker read a letter from Professor Forshey, of Natchez, giving an account of several interesting displays of meteors.

Mr. Walker observed, that the display of the 20th of April, which was noticed in Virginia in 1803, and which has been referred to by MM. Arago, Quetelet, Herrick and others, was watched for by Mr. Herrick in the last three years, without any remarkable result.

Corresponding observations were made in the present year at Cambridge, New Haven, Philadelphia and Washington, on the 19th, the 20th and 21st being cloudy, from 11 o’clock till midnight; but the number of meteors seen was not greater than usual.

In the morning of the 19th, however, a gentleman of Philadelphia, Mr. William F. Kintzing, counted eight in the course of ten minutes, shortly after midnight.

At about 8 o’clock on the same night, the 18th, at Vidalia, in Louisiana, Prof. Forshey noticed an unusual number of meteors in different parts of the heavens, and on tracing their paths backwards, found that they traversed the constellation Virgo.

Having commenced precise observations at half-past eight, and continued them for three hours, he saw in two hours and a quarter, forty-five minutes being lost in recording, sixty meteors, of which all but five passed within 10° from the common radiant point.

These meteors were very unlike those of the August shower, being chiefly without trains, and of a reddish color, few of them of the first magnitude, and the greater number of the third and inferior magnitudes.

Their velocities were remarkably equal and gentle; their paths short; and their light first increasing, then waning, as if they were moving on a chord to the circle of visibility.

Professor Forshey determined their radiant point to be in a line drawn from Spica to 2 Virginis, somewhat nearer to Spica, say in R. A. 198°, S. Decl. 8°.

This observation of the convergent point of these meteors, Mr. Walker regards as strongly confirmatory of the cosmical theory of shooting-stars; inasmuch as it seems to demonstrate the existence in this group of a planetary velocity, like that of the December group observed by Mr. Herrick in 1838, in a direction normal to the observer’s motion, and incapable of resulting from it.

Professor Forshey also observed the meteor-shower of the 12th of November, 1833: he was then a cadet at West Point.

While engaged, long before dawn, in preparing his morning recitation, his attention was caught by flashes of light at his window as if from lightning.

The spectacle which met him on opening it, he describes as one of singular and fearful sublimity, the whole sky streaming with fire-balls, throwing a bright light upon the plain, and reflecting luridly against the mountains which enclose West Point.

After a few minutes, finding no intermission in the display, he roused his associates to witness it; and the first sense of personal hazard yielding to the remark, that none of the meteors (meteorites, as he then supposed) were actually descending into the plain, but that they became invisible before reaching the level of the mountains, he crossed the plain to awaken Professor Courtenay.

While in company with this gentleman, he witnessed the magnificent meteor with a serpentine train, described by Professor Olmsted and others, and which has been called Twining’s meteor, after the Professor who calculated its relative path and velocity.

Both Professor Courtenay and himself noticed the white nebula which it left on exploding, and the beautiful silvery cloud that remained for some ten minutes after.

He listened carefully, during the meteoric display, for the noises which are said sometimes to attend such phenomena, but could hear none; the explosion of the Twining meteor, he is confident, was not accompanied by an audible report.

Professor Forshey does not believe that the meteors of the 12th of November have the anniversary character.

He saw the great auroral arch of 17th Nov. 1835, from a point near the junction of the Ohio and Mississippi; and on the 14th November, 1837, he witnessed at Jefferson College a brilliant crimson arch, a rare phenomenon in that latitude, 31° 36′.

He noticed also occasional brilliant meteors on the 13th and 14th of November, 1837, but they did not appear to come from the well-known radiant point of 1833, in Leo.

The times for observation in 1838 and 1839 were too cloudy to allow of satisfactory results.

The subsequent anniversaries were clear, and well watched, but without any observation of interest.

Professor Forshey mentions that he had seen the zodiacal light in the west from December to May, but that he first witnessed it in the east on the 4th of October of last year, when it continued in great brilliancy from 3 a.m. till daylight. 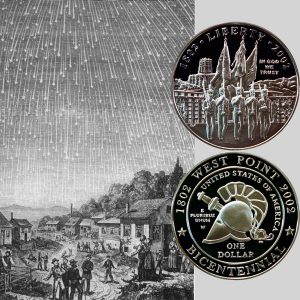