Today, the Washington Commemorative Silver Half Dollar Coin shares the tale of Lydia Darragh’s bravery amidst the occupation of the British army.

On the evening of December 2, 1777, young Lydia Darragh took steps to overhear plans of the British soldiers using her home for their strategic discussions.

The following description of the events was found in the 1888 book by Henry Clay Watson titled Noble Deeds of Our Fathers, As Told by Soldiers of the Revolution Gathered Around the Old Bell of Independence.

“The superior officers of the British army were accustomed to hold their consultations on all subjects of importance at the house of William and Lydia Darragh, members of the Society of Friends, immediately opposite to the quarters of the commander-in- chief in Second Street.

“It was in December, in the year that they occupied the city, that the adjutant-general of the army desired Lydia to have an apartment prepared for himself and friends, and to order her family early to bed; adding, ‘ When ready to depart, notice shall be given to you to let us out, and to extinguish the fire and candles.’

“The manner of delivering this order, especially that part of it which commanded the early retirement of her family, strongly excited Lydia’s curiosity, and determined her, if possible, to discover the mystery of their meeting. Approaching without shoes the room in which the conference was held, and placing her ear to the keyhole, she heard the order read for the troops to quit the city on the night of the 4th, to attack the American army encamped at White Marsh.

“Returning immediately to her room, she laid herself down, but in a little while a loud knocking at the door, which for some time she pretended not to hear, proclaimed the intention of the party to retire.

“Having let them out, she again sought her bed, but not to sleep; the agitation of her mind prevented it. She thought only of the dangers that threatened the lives of thousands of her countrymen, and, believing it to be in her power to avert the evil, determined at all hazards to apprise Gen. Washington of his danger.

“Telling her husband at early dawn that flour was wanting for domestic purposes, and that she should go to Frankford to obtain it, she repaired to headquarters, got access to Gen. Howe, and obtained permission to pass the British lines.

” Leaving her bag at the mill, Lydia now pressed forward towards the American army, and meeting Capt. Allen McLean, an officer from his superior intelligence and activity selected by Gen. Washington to gain intelligence, discovered to him the important secret, obtaining his promise not to jeopardize her safety by telling from whom he had obtained it.

“Capt. McLean with all speed informed the commander-in-chief of his danger, who, of course, took every necessary step to baffle the contemplated enterprise, and to show the enemy that he was prepared to receive them.

” Lydia returned home with her flour, secretly watched the movements of the British, and saw them depart. Her anxiety during their absence was excessive ; nor was it lessened when on their return the adjutant-general, summoning her to his apartment, and locking the door with an air of mystery, demanded whether any of the family were up on the night that he had received company at her house.

“She told him that without an exception they had all retired at eight o’clock. ‘ You, I know, Lydia, were asleep, for I knocked at your door three times before you heard me; yet, although I am at a loss to conceive who gave the information of our intended attack to Gen. Washington, it is certain we were betrayed; for, on arriving near his encampment, we found his cannon mounted, his troops under arms, and at every point so perfectly prepared to receive us, that we were compelled like fools to make a retrograde movement, without inflicting on our enemy any manner of injury whatever.’ ”

In appreciation and remembrance of Lydia’s Darragh’s curiosity and courage 237 years ago.

The Washington Commemorative Silver Half Dollar Coin shows against bags from a grist mill. 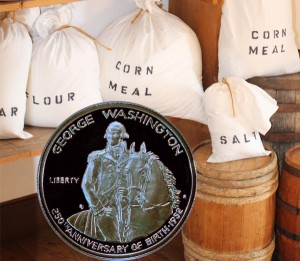