From the History of the Boston Massacre, March 5, 1770 by Frederic Kidder published in 1870, two depositions follow:

(No. 48). I, Samuel Condon, of lawful age, testify and say, that on the night of the 5th instant March, being on the Long wharf, between the hours of 9 and 10 o’clock, and hearing the bells ring as for fire, I ran up King street; on my coming nigh the Town house I saw a number of people, about thirty or forty, chiefly consisting of boys and lads, who proceeded down said street opposite the Custom-house; the sentinel on their approach placed himself on the Custom-house steps, and charged his musket and presented the same against the body of the people who offered him no insult or violence; in a few minutes after, a party came down from the main guard, consisting of about eight soldiers with their guns and bayonets in a charged position, headed by an officer, and posted themselves by the west corner of the Custom-house, round the sentry box in a half circle; at this time I stood near the door of the Royal position, moved from thence down said Royal Exchange lane, and stood nigh the west end of the Custom-house; during this interim I saw no violence offered the soldiers; in a few minutes after having placed myself as aforesaid, a musket was fired by the soldiers who stood next the corner, in a few seconds after another was fired, and so in succession till the whole was discharged, to the number of eight or thereabouts; while the muskets were discharging I walked down the lane, and when the firing ceased I turned and went up to the head of the lane where I saw the people carrying off one dead person and two more laying lifeless on the ground about two muskets’ length from the said soldiers, inhumanly murdered by them, the blood then running from them in abundance; a person asked the soldier who fired first, the reason for his so doing, the soldier answered, “Damn your bloods, you boogers, I would kill a thousand of you!” the soldiers were then charging their muskets again in order for a second discharge in case any insult had been offered them.

(No. 50). Francis Archbald, jun., of lawful age, testifies and saith, that on Monday evening, the fifth of March instant, at about ten minutes past nine of the clock of said evening, as he was going through the alley that leads from Cornhill to Brattle street (so called), with several others with him, he saw a soldier with a cutlass, flourishing it about in said alley, and a mean looking fellow with him, with a club in his hand; then the deponent heard somebody outside of the alley speak to the said soldier and told him to put up his cutlass, for it was not clever to carry such a weapon in the night without it was in the scabbard; whereupon said soldier came up to him the deponent, with his cutlass pointing towards his breast, and damned him, and asked him what he had to say against it; whereupon the deponent told him to stand off. The said soldier then went up to one of the lads that was with him and struck him (as the deponent thought), the deponent then went out of said alley and hallooed to some lads who were standing near the Town-house; when they came to deponent’s assistance, they made said soldiers retire through said alley to the barracks; in about five or six minutes after, about twelve or fifteen soldiers came out of said barracks (as I heard the next day they were encouraged and set on by Ensign Mall, belonging to the 29th regiment), with cutlasses, tongs, and clubs, and came up to them and damned them and said “Where is the Yankee boogers?” when they began to strike the people in the street with said weapons. And as the deponent was standing with Mr. John Hicks, one of the soldiers came up with a pair of tongs, and just going to make a stroke at said deponent, said Hicks knocked him down, whereupon the deponent, when said soldier got up, knocked him down again and broke his wrist (as he was informed afterwards), then the deponent was going home to the south end. Just as he got to the Town-house he looked down King street and saw about fifty or sixty people standing in the middle of said street, opposite the Custom-house, then the deponent went down to see what was the matter. When he got down said main-guard (amongst which was one Matthew Kilroy, of the 29th regiment) going to the sentinel that was standing at the Custom-house. Then the deponent went over to the side of the way and there stood about two minutes, when he saw the flash, and heard the report of a gun that was fired from said sentinel’s post, and six or seven fired directly afterwards. Then the deponent saw three men lying near said sentinel’s post, dead. And the deponent further adds, that at the time of his standing there as aforesaid, he saw nobody molest or trouble said sentinel or party of soldiers (as aforesaid) in any shape whatever. And further the deponent saith not.

A Short Narrative of the Massacre(published 1849) by James Bowdoin, Joseph Warren and Samuel Pemberton described the carnage:

It was not expected, however, that such an outrage and massacre, as happened here on the evening of the fifth instant, would have been perpetrated. There were then killed and wounded, by a discharge of musketry, eleven of his Majesty’s subjects, viz. :

Mr. Samuel Gray, killed on the spot by a ball entering his head.

Mr. James Caldwell, killed on the spot, by two balls entering his back.

Mr. Samuel Maverick, a youth of seventeen years of age, mortally wounded ; he died the next morning.

Christopher Monk and John Clark, youths about seventeen years of age, dangerously wounded. It is apprehended they will die.

The Black Revolutionary War Patriots Commemorative Silver Dollar shows against an artist’s portrayal of the Boston Massacre on March 5, 1770. 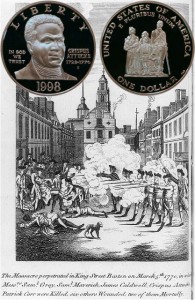