Today, the James Madison Presidential Dollar Coin tells the story of the alleged British spy, John Henry, to whom the American government paid money for his information.

On March 9, 1812, President James Madison sent the following letter to the Senate and House of Representatives:

I lay before Congress copies of certain documents, which remain in the Department of State.

They prove that at a recent period, whilst the United States, notwithstanding the wrongs sustained by them, ceased not to observe the laws of peace and neutrality towards Great Britain; and in the midst of amicable professions and negotiations on the part of the British Government, through her public Minister here; a secret Agent of that Government was employed in certain States, more especially at the seat of government (Boston) in Massachusetts, in fomenting disaffection to the constituted authorities of the nation; and in intrigues with the disaffected, for the purpose of bringing about resistance to the laws, and eventually, in concert with a British force, of destroying the Union and forming the Eastern part thereof, into a political connection with Great Britain.

In addition to the effect which the discovery of such a procedure ought to have on the public councils; it will not fail to render more dear to the hearts of all good Citizens, that happy Union of these States, which, under divine providence, is the guarantee of their liberties, their safety, their tranquility, and their prosperity.

Less than a month before, John Henry sent to Secretary of State James Monroe a letter detailing his employment by Great Britain as a spy.

Sir Craig operated as the Governor General of the British provinces in North America and was located in Quebec, Canada.

The February 1809 letter to Mr. Henry provided the most instruction:

The principal object that I recommend to your attention is the endeavor to obtain the most accurate information of the true state of affairs in that part of the Union, which, from its wealth, the number of its inhabitants, and the known intelligence and ability of several of its leading men must naturally possess a very considerable influence over, and will indeed probably lead the other Eastern States of America in the part that they may take at this important crisis.

I shall not pretend to point out to you the mode by which you will be most likely to obtain this important information; your own judgment and the connections which you may have in the town must be your guide.

I think it however necessary to put you on your guard against the sanquinness of an aspiring party; the federalists as I understand have at all times discovered a leaning to this disposition, and their being under its particular influence at this moment is the more to be expected from their having no ill founded ground for their hopes of being nearer the attainment of their object than they have been for some years past.

In the general terms which I have made use of in describing the object which I recommend to your attention; it is scarcely necessary that I should observe, include the state of the public opinion, both with regard to their internal politics and to the probability of a war with England; the comparative strength of the two great parties into which the country is divided, and the views and designs of that which may ultimately prevail.

Before his departure, the government of the United States paid Mr. Henry $50,000 for the information he provided regarding the British spying efforts.

In the rest of the story, Mr. Henry worked with a Frenchman named de Crillon in sharing the spying efforts with the US government.

However, after John Henry sailed for France, de Crillon proved to be an imposter.

President Madison believed the story provided by John Henry and used it as part of the basis of declaring war on Great Britain.

His opponents at the time claimed the papers were not only fraudulent but also a political trick to justify the war with Britain.

Was John Henry a spy for Britain? Did he and de Crillon the Americans out of $50,000? Or, did the Madison government build an excuse to justify the war?

The James Madison Presidential Dollar Coin shows against a booklet of the “facts” about John Henry. 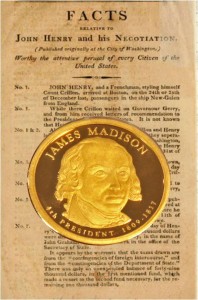