Today,  the Harrison Presidential One Dollar Coin remembers the trip the president made to Topeka, Kansas and his speech to the soldiers’ reunion on October 10, 1890.

From the Barton County Democrat newspaper of Great Bend, Kansas, on October 16, 1890:

President Harrison Received By the Old Soldiers With Much Enthusiasm — The Great Day of the Reunion —A Splendid Street Parade.

Senator Ingalls boarded the train when it stopped at North Topeka and remained with the Presidential party until it left for Kansas City.

As the President stepped on to the platform and the crowd gave way good-naturedly, no matter in what direction the eye turned it looked on nothing but bunting and human faces.

Carriages were in waiting, and while the Presidential party and escort were being assigned the United States cavalry at Fort Riley, commanded by General Forsythe, formed and the President was allowed to pass through.

He was given a seat to the right of Governor Humphrey and the executive carriage was provided with a guard. The remaining carriages proceeded in double column.

Immediately behind the President was the carriage containing Secretary Tracy, Senator Ingalls and Chief Justice Horton.

Private Secretary Halford with a local escort occupied the adjoining carriage, while the remainder of the party followed.

It was not until the procession had started that an adequate idea of the immensity of the crowd could be obtained. The wide streets were crowded to the fences and the carriages were barely given room to pass.

From every window and almost every house top flags were waved and hats lifted. It was the “President’s Day” at a soldiers’ reunion and the veterans were given the most advantageous position. But the school children were not neglected and 5,000 of them saluted the President along his line of march.

When Third street was reached the President arose in his carriage to greet the crowd. It seemed to be a concourse of people bent on sightseeing and nothing more.

The old soldiers at times would raise a cheer and the crowd would re-echo, but there was no noisy demonstration. The President bowed to each division of old soldiers.

These with Lincoln post drum corps, Sons of Veterans and ex-Union prisoners of war formed the second division.

The President passed from the veterans to the school children. There were more than 5,000 of them and each had been provided with a flag. As the party passed it was saluted with a presentation of flags.

The President’s carriage was drawn for nearly two miles and as each block was passed the crowd seemed to grow denser.

When the Presidential party reached Tenth street, immediately south of the State House, it halted and the old soldiers passed in grand review. The President stood with uncovered head, and as each division passed it greeted him with cheers.

It required eighty minutes for the President to review the vast parade.

The Sons of Veterans were followed by the Kansas organization of ex-prisoners of war, who cheered frantically as they passed in front of the President. This marked the occasion of the largest reunion Kansas, the great State of ex-soldiers, ever had.

The ex-sailors gave a cheer for Secretary Tracy. The various educational institutions in and around Topeka followed the soldiers and sailors.

After the review had ended the Presidential party proceeded to Twelfth and Harrison, where the procession disbanded and President Harrison returned to dinner at the Copeland.

A vast crowd was awaiting his arrival and it was with difficulty that way was made for him.

The party was given two hours in which to eat dinner, smoke and take a short rest.

The crowd grew gradually until the procession was ready to move to the fair grounds, where the reunion was held.

The order was virtually the same as in the morning; except that Senator Ingalls rode in the carriage with the President.

The procession proceeded in rapid motion to the fairgrounds.

Within the grounds there were congregated 30,000 veterans and the President was greeted with enthusiastic cheers.

Thousands who desired to hear him talk were unable to do so.

The speaker’s stand was decorated with flags and patriotic trimmings.

The members of the Presidential party with a number of the State and G. A. R. officials were given seats of honor and with every movement of the party there was a cheer from some source.

“I am strongly tempted to omit even the attempt to speak to you today. I think it would be better that I should go home and write yon an open letter. [Great laughter and cheering.]

“I have been most profoundly impressed with the incidents which have attended this tremendous, and, I am told, this unprecedented gathering of the soldiers and citizens of the great State of Kansas. No one can interpret in speech the lessons of this occasion.

“No power of description is adequate to convey to those who have not looked upon it, the spirit and power of this meeting. The assemblage is altogether too large to be greeted individually; one cannot get his arms about it. [Laughter and cheers.]

“And yet, so kindly have you received me that I would be glad if, to each of you, I could convey the sense of gratitude and appreciation which is in my heart.”

The President paid a tribute to the soldiers of Kansas and the Sons of Veterans, and declaring that Indiana had a grievance against the Sunflower State for taking away so many of her veterans.

“Now, fellow citizens, you will excuse me from attempt at further speech. I beg you again to believe that I am grateful, so far as your presence here has any personal reference to myself, grateful as a public officer for this evidence of your love and affection for the Constitution and the country which we all love. I hear there is some grumbling in Kansas, and I sometimes think it is because your advantages are too great. [Laughter.]

“A single year of disappointment in agricultural returns should not make you despair of the future or tempt you to make unsafe experiments. Life is made up of averages, and I think yours will show a good average. Let us look forward with hope, with courage, with fidelity, thrift, patience, good neighborly hearts and a patriotic love for the flag, Kansas and her people have an assured and happy future.” [Prolonged cheering.]

At the conclusion of the President’s address there were loud cries for Senator Ingalls.

The senior Kansas Senator, addressing the Governor and the G. A. R., said:

“It gives me pleasure to say to you that the State of Kansas has always been renowned for its hospitality. Upon this occasion she has outdone herself. Everything is possible in Kansas and the spectacle which is presented to us today could occur nowhere else within the borders of the civilized world. Whenever a Kansas man is told that a thing is impossible he goes and does it.

“Had anyone told in advance that a spectacle like that which we see here today could have occurred he would have been treated with doubt and derision.”

At this point one corner of the speaker’s stand began rapidly settling with the great mass of humanity upon it and President Harrison warned Senator Ingalls that the stand was going.

Women were frightened and men rapidly vacated the stand, thus relieving the pressure.

In conclusion Senator Ingalls said: “Fellow-citizens, there is, I am happy to say, in this greeting salutation to the Chief Magistrate of the Union no partisanships of class. We are here, not as Republicans, not as Democrats, but as citizens of the United States and citizens of the State of Kansas; there is no State line in our greeting salutation. There is no North, no South, no East, no West in our greeting and salutation. We greet him as the foremost citizen of the Republic and bid him hail and farewell on his journey eastward.” [Great applause.]

Ex-Governor Anthony, and several other gentlemen of distinction addressed the vast audience before the meeting adjourned.

The President and his party were driven rapidly from the fair grounds to the special train which left promptly at four o’clock.

The Harrison Presidential One Dollar Coin shows with a newspaper artist’s portrait of the president, circa 1890. 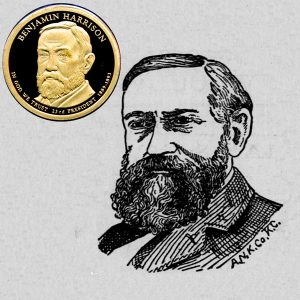