Today, the Ireland One Penny Coin, from the first year of their decimal coinage, remembers when the Continental Congress drafted and read the message “To the People of Ireland” on July 28, 1775.

From The Irish Question – Hearings before the Committee on Foreign Affairs; House of Representatives Sixty-fifth Congress – Third Session On H. J. RES. 357 requesting the commissioners plenipotentiary of the United States of America to the international peace conference to present to the said conference the right of Ireland to freedom, independence, and self- determination; December 12, 1918:

For any subject of England to aid America was, of course, treason against England.

And the American Fathers, conscious of the consequences of this crime, deemed it their duty to forbid the Island of Jamaica to incur the dangers of aiding the Revolution.

“The peculiar situation of your Island,” said the Congressional Letter to the Jamaican Assembly, read on July 25, 1775, “forbids your assistance.” Remoteness from England endowed Jamaica with, at least, relative safety.

If wise discretion was advisable in Jamaica, it might have been considered imperative in Ireland, isolated and well-nigh defenseless at the very gates of England, and therefore in a “peculiar situation” to perform vicarious expiation for all traitorous colonists.

But no admonition to caution came from Congress to moderate Irish ardor for the American cause.

Instead, Congress appointed a committee to draft an address “To the People of Ireland,” which was read on July 28, 1775, and which ran as follows:

“We are desirous of the good opinion of the virtuous and humane. We are peculiarly desirous of furnishing you with the true state of our motives and objects, the better to enable you to judge of our conduct with accuracy and determine the merits of the controversy with impartiality and precision. Your Parliament has done us no wrong. You had ever been friendly to the rights of mankind; and we acknowledge with pleasure and gratitude that your nation has produced patriots who have nobly distinguished themselves in the cause of humanity and of America.”

The judgment sought by Congress from Ireland was so unanimous in favor of America that the disastrous effect of the Revolution on Irish trade did not prevent “the mass of the people, both Catholic and Protestant, from wishing success to the patriotic colonists” (Mitchel).

“Ireland was with America to a man,” declared Pitt, the “Great Commoner” (Bancroft’s “History of the United States,” vol. VII, p. 194).

The people of Dublin presented their thanks, and the “Merchants’ Guild” gave an address of honor to the Earl of Effingham who “refused to draw the sword against the lives and liberties of his fellow subjects” in America.

In Belfast meetings were held and money was raised to support the American cause.

And Grattan boldly referred to America as “the only hope of Ireland and the only refuge of the liberties of mankind” (“Select Speeches of Grattan,” edited by Duffy, p. 104).

The menace of that “hostility to the pretensions of England” which Franklin had sought to excite in Ireland grew aggressively until it proved powerful to re-enforce American valor in establishing the independence of the revolting States.

The Americans had incited in the Irish a fervor for freedom which Lord North and his contemporaries, in spite of conciliation, corruption, and concession, failed to calm.

It did not evoke a crisis till 1782, and it did not make the country a shambles till 1798; but from the first it was an ever-present danger at the very heart of the British Empire and it gravely handicapped the war council at Westminster in the conduct of their operations against the American revolutionaries.

But apart altogether from the influence which Ireland’s attitude exerted upon the fate of the American Revolution, England had direct evidence of the Irish share in her defeat.

Practically the first blow in the Revolution was struck on behalf of the American rebels by the son of a Limerick schoolmaster, John Sullivan, of New Hampshire, who on December 13, 1774, captured the Fort of William and Mary.

The first stroke at British sea power was delivered for America off Machias, on the coast of Maine, in May, 1775, by Jeremiah O’Brien. Richard Montgomery, of Rapahoe, and other Irish generals helped to lead the American forces in the field; Andrew Brown, an Ulsterman, served as Mustermaster General; Stephen Moylan, brother of the Bishop of Cork, acted as aid-de-camp to Washington and later as Quartermaster General to the Forces; John Barry, formerly of Wexford, founder of the American Navy, scoured the seas; the Friendly Sons of St. Patrick contributed to the revolutionary treasury $517,000, an immense sum in those days; and men of Irish birth and blood stood high in the councils of the revolutionary Government.

The famous Pennsylvania line, the bulwark of the American defense, was called “the line of Ireland,” so largely was it formed of Irishmen.

There were Irishmen in every American camp and field.

In the course of a debate in the Irish House of Commons on April 2, 1784, the Hon. Luke Gardiner stated: “I am assured from the best authority that the major portion of the American Army was composed of Irish and that the Irish language was as commonly spoken in the American ranks as English. I am also informed that it was their valor determined the contest so that England had America detached from her by force of Irish emigrants.”

Major General Robertson, of the British Army, in “The Evidence as Given Before a Committee of the House of Commons on the Detail and the Conduct of the American War” (London, 1785), is recorded as testifying under oath that the American General, Henry Lee, informed him that “half the rebel Continental army were from Ireland.”

In 1779 Count Arthur Dillon, the son of an Irish nobleman in the service of Louis XVI, addressed to the French War Office a petition on behalf of all the Irish soldiers in France craving that they be allowed to go to fight for American freedom.

The petition being granted, he sailed from Brest with 2,300 Irish troops.

In conformity with the American plan of campaign, Dillon was directed to attack British strongholds in the West Indies. He and the other Irishmen, the very van of the forces sent from France, soon paralyzed British power in the West Indies and captured there bases of British activity against America.

The Irish died on the field, languished in the British prison hulks in the harbor of New York, lived maimed, and were branded traitors, that America should be free.

And when the Declaration of Independence was issued among those who signed it were: Smith, Taylor, and Thornton, of Irish birth ; McKean, Read, and Routledge, of Irish parentage; Carroll and Lynch, grandsons of Irishmen; and Hancock and Whipple, of Irish descent on the maternal side.

Well might George Washington Parke Custis, the adopted son of the Father of the United States, says to his countrymen:

“The Shamrock should be entwined with the laurels of the Revolution. Americans, recall to your minds the recollections of this heroic time when Irishmen were your friends and when in the whole world we had not a friend beside. The rank grass had grown over the grave of many a poor Irishman who had died for America ere the Flag of the Lilies floated in the field by the Star-Spangled Banner.”

The Ireland One Penny Coin shows with an artist’s portrayal of John Hancock signing the message to the People of Ireland. 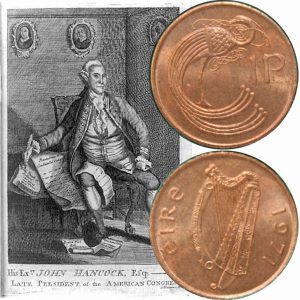