From the St. Paul Daily Globe of the following day:

Tonight the government of the United States is in full possession of the Chickamauga and Chattanooga field. The nation has another public park, which, while it may not be as grand from a scenic point of view as that of the Yellowstone, yet will be far dearer to the hearts of the people.

The park dedicated to the nation today was consecrated with the blood of 35,000 heroes in 1863. It was consecrated by a battle which, for desperate fighting and carnage, has few if any equals in the world’s history.

But the unique feature of this dedication today is the fact that the men who struggled and fought against each other at Chickamauga this day thirty-two years ago met again today as brothers, and each did his share towards making the dedication a success.

They sealed a compact by which the last vestige of venom caused by the civil war was blotted out.

Within the limits of this grand historic place of pleasure for the nation today were upwards of 75,000 people.

Among the throng were some of the nation’s heroes, and there were also some of her highest officials.

There were a baker’s dozen of governors and hundreds of men of renown who took part in the conflict between the North and South.

The ceremonies took place at Snodgrass hill, whose sides for a mile were so thickly covered with dead thirty-two years ago that the survivors say one could walk all over it, from crest to base, stepping from one prostrate body to another.

Hours before the exercises began the battlefield was alive with those who had come to attend the dedication.

The first event of the day was a display of arms by Battery F, Fourth United States artillery.

Then there was a battalion regimental drill, showing the new tactics and field movements, under command of Col. Holland.

These exercises of arms were of great interest to the veterans, to the “Rebels” and “Yanks,” though the old fellows expressed the belief that such tactics would have fallen as timothy before a mower if placed against those adopted during the battle of Chickamauga.

Vice President A. E. Stevenson presided over the dedicatory exercises. He was  introduced by Gen. John S. Fullerton chairman of the Chickamauga & Chattanooga National park.

When the vice president came forward he was greeted with loud applause.

The meeting was called to order at 12 o’clock, and at that hour Snodgrass hill was covered with people.

The great natural area selected by the national commission was so arranged that nearly every one of the tens of thousands of auditors could hear the speeches and addresses throughout.

By way of beginning there was a national salute of forty-four guns by the artillery, followed by “The Star Spangled Banner,” played by one of the United States infantry bands.

It was cheered to the echo by veterans of the blue and of the gray, and in their patriotic enthusiasm many of the grizzled old veterans shed tears of joy.

When the applause had ceased, Vice President Stevenson made a brief address appropriate to the occasion. He said:

“I am honored by being called to preside over the ceremonies of this day.

“By solemn decree of the representatives of the American people this magnificent park, with its wondrous associations and memories, is now to be dedicated for all time to national and patriotic purposes.

“This is the fitting hour for the august ceremonies we now inaugurate.

“Today, by the act of the congress of the United States, the Chickamauga and Chattanooga National Military park is forever set apart from all common uses, solemnly dedicated for all ages to all the American people.

“The day is auspicious. It notes the anniversary of one of the greatest battles known to history.

“Here, in the dread tribunal of last resort, valor contended against valor. Here brave men struggled and died for the right, ‘as God gave them to see the right.’

“Thirty-two years have passed, and the few survivors of that masterful day—victors and vanquished alike—again meet on this memorable field.

“Alas, the splendid armies which rendezvoused here are now little more than a procession of shadows!

“‘On Fame’s eternal camping ground
Their silent tents are spread,
While Glory guards with solemn round
The bivouac of the dead.’

“Our eyes now behold the sublime spectacle of the honored survivors of the great battle coming together upon these heights once more.

“They meet not  in deadly conflict, but as brothers, under one flag, fellow citizens of a common country; all grateful to God that in the supreme struggle, the government of our fathers—our common heritage—was triumphant, and that to all of the coming generations of our countrymen it will remain ‘an indivisible union of indestructible states.’

“Our dedication today is but a ceremony. In the words of the immortal Lincoln at Gettysburg: ‘But in a larger sense we cannot dedicate; we cannot consecrate. We cannot, hallow this ground. The brave men; living and dead, who struggled here have consecrated it far above our power to add or detract.’

“I will detain you no longer from listening to the eloquent words of those who were participants in the bloody struggle—the sharers alike in its danger and in its glory.”

When Vice-President Stevenson had finished prayer was offered by Rt. Rev. Bishop Gallor, of Tennessee.

“America,” the beautiful national anthem, was then sung by the audience, accompanied by the band and every one of the fifty odd thousand of people assembled, blue and gray, sang it as if  inspired.

The great volume of sound rolled up as a great tidal wave, and long before the song was ended tears were coursing down the cheeks of thousands of the old veterans.

It made the cold chills run up and down the back of even the most hardened of the battle-scarred veterans, and those who shed tears were proud of it.

Not one of them was ashamed, nor was anyone who would shame them.

The Civil War Battlefield Commemorative Silver Dollar Coin shows with an image of the Battlefield of Chickamauga, circa 1900. 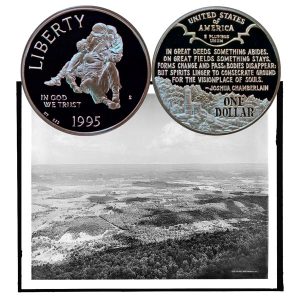