On October 1, 1925, hundreds of citizens made their way up a rough mountain pass, heading for a remote peak in the Black Hills of South Dakota called Mount Rushmore.

Just weeks before, the men of Keystone, South Dakota, had cut a three-mile long path through a heavy forest with nothing but picks, shovels and horse-drawn scrapers.

In the meantime, local women had worked around the clock stitching five 30-foot flags, cooking, and generally beautifying the grounds.

The locals had bent themselves to these tasks all so an odd little artist named Gutzon Borglum could announce to the world his plan to carve 160-foot likenesses of George Washington, Thomas Jefferson, Abraham Lincoln and Teddy Roosevelt onto the mountain face.

In the Tuscaloosa News of July 3, 1954, Bruce Campbell wrote:

You’re a tourist, driving along Iron Mountain Road west of Rapid City, South Dakota, through the pine-clad Black Hills. Suddenly you come to a tunnel blasted through the mountain and get your first view of the four great stone faces of the Mount Rushmore Memorial.

The tunnel itself is a telescope. You drive further along the scenic highway and pass through two more tunnels. In one of them you look back and see Mount Rushmore framed and in the other you look forward again.

Finally you arrive at the observation point and there, more than 6,000 feet above sea level, you gaze in awe at the largest monument in the world—the granite faces of George Washington, Thomas Jefferson, Theodore Roosevelt and Abraham Lincoln gazing majestically over the hills in the incredibly lifelike creation by Gutzon Borglum.

The Mount Rushmore Memorial cost roughly a million dollars, in the pre-inflation ’30s, to dynamite and carve into being.

When he read of the dissension in Georgia that led Borglum to abandon his partly-completed effort to carve General Robert E. Lee and other heroes of the Confederacy across the face of Stone Mountain, Robinson invited the master sculptor to South Dakota.

He tramped the hills looking for the perfect mountain and chose the one called Rushmore largely because of its natural lighting.

George Washington now catches the first ray of the sun each morning and the last crimson glow of sunset.

The project was authorized in 1925 by the state legislature and private donations started it.

President Calvin Coolidge spent the summer of 1927 in the Black Hills and, back in Washington, he saw to it that Congress appropriated funds to match private contributions dollar for dollar.

Blasting and jack-hammering according to a unique system of measurements, Borglum created the masterpiece.

In 1939, the last figure, that of Theodore Roosevelt, was completed.

The four faces are the biggest man-made carvings anywhere in the world.

Lincoln’s nose is 21 feet long and a block of granite 30 inches long is the sparkle in his eye.

If their whole bodies were done to the proportion of their faces, the four Presidents would be 465 feet tall. By contrast, the entire Statue of Liberty measures 151 feet.

Today Mount Rushmore ranks as one of the most-visited national monuments in the US, drawing more than half a million tourists a years.

And most of them, as they gaze at it, seem to feel what Borglum meant when he said:

“I want, somewhere in America on or near the Rockies, the backbone of the Continent, so far removed from succeeding, selfish, coveting civilizations, a few feet of stone that bears witness, carries the likenesses, the dates, a word or two of the great things we accomplished as a Nation, places so high it won’t pay to pull down for lesser purposes.

“Hence, let us place there, carved high, as close to heaven as we can, the words of our leaders, their faces, to show posterity what manner of men they were. Then breathe a prayer that the records will endure until the wind and the rain alone shall wear them away.”

Since 2009, over two million visitors per year have viewed the Mount Rushmore monument. 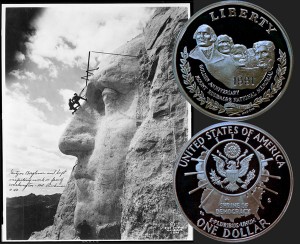