By the President of the United States of America

Near Eagle Nest, New Mexico, on a hilltop between peaks of the Sangre de Cristo Mountains and overlooking the Moreno Valley, stands a memorial to our country’s Vietnam veterans. The origin of this shrine explains exactly why Americans for all the generations to come will consider it a memorial of national significance.

The monument arose from one family’s grief and solemn pride in a gallant son who gave his life for his fellow Marines, for his country, and for a people oppressed. On May 22, 1968, First Lieutenant Victor David Westphall III, USMC, a rifle platoon commander, was killed in an enemy ambush in Con Thien, Republic of Vietnam. His parents, Dr. and Mrs. Victor Westphall, and his younger brother Douglas decided to erect a permanent memorial to honor his spirit and that of his 12 comrades in arms who died along with him in that battle.

Dedicating their own time and resources, the Westphalls built an inspirational monument rising nearly 50 feet in dramatic architectural lines and containing a memorial chapel where visitors could pray and reflect upon the sacrifices America’s fighting forces have made to keep our country free.

The Westphalls completed the memorial in 1971 and named it the Vietnam Veterans Peace and Brotherhood Chapel. In 1982, the Disabled American Veterans (DAV), a national organization of more than one million veterans disabled in military service, formed a special nonprofit corporation to assume ownership and assure perpetual maintenance of the shrine. The DAV has added a visitors’ center, guest house, and access to the site for disabled persons.

On Memorial Day, 1983, the memorial was rededicated and given its present name. Later that year the New Mexico Legislature declared it a State memorial. The Disabled American Veterans Vietnam Veterans National Memorial has become known to millions of Americans and has inspired the construction of other memorials to Vietnam veterans across our land. It has forever acquired a place in the history and heritage of the United States and in the hearts of all who would salute the valor, the honor, and the sacrifices of America’s Vietnam veterans.

The Congress, by Public Law 100-164, approved November 13, 1987, has recognized the Disabled American Veterans Vietnam Veterans National Memorial as a memorial of national significance and requested the President to issue a proclamation in observance thereof.

Now, Therefore, I, Ronald Reagan, President of the United States of America, do hereby commemorate the recognition of the Disabled American Veterans Vietnam Veterans National Memorial as a memorial of national significance. I also salute the efforts of the individuals who have made possible the creation and continued existence of this memorial.

In Witness Whereof I have hereunto set my hand this sixteenth day of November, in the year of our Lord nineteen hundred and eighty-seven, and of the Independence of the United States of America the two hundred and twelfth.

The Disabled Veterans Commemorative Silver Dollar Coin shows with a background of the Peace and Brotherhood Chapel built by the Westphalls in New Mexico. 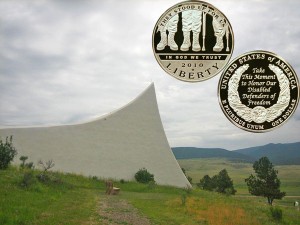