Today, the Lincoln Commemorative Silver Dollar Coin remembers the ceremony and the monument unveiled at Oak Ridge in Springfield, Illinois, on October 15, 1874.

From the Washington, D. C., National Republican newspaper of October 16, 1874:

Unveiling the Statue of Abraham Lincoln.

Springfield, Ill., Oct. 15. — The Society of the Army of the Tennessee assembled this morning, and selected Des Moines, Iowa, for the next meeting, which will be held September 29 and 30,1875.

Gen. Thomas C. Fletcher, of Maine, was elected orator. The society then adjourned to participate in the exercises of unveiling the Lincoln Statue, at Oak Ridge cemetery.

The procession began to form at 11 o’clock, Gov. Beveridge acting as grand marshal. President Grant, with Secretary Belknap, occupied a carriage at the head of the procession, preceded by the military band from Newport barracks and escorted by the Governor’s Guard, a military organization of this city, as a guard of honor.

General Sherman marched on foot at the head of the Society of the Army of the Tennessee, and following him was a long line of army officers, military and civil societies.

The procession arrived at the cemetery at one o’clock. Not less than twenty-five thousand persons were present.

After the playing of a dead march by the band, Bishop Wayman made a fervent and eloquent prayer, and a choir of singers chanted “With malice toward none; with charity for all.”

Hon. Jesse K. Bubois then read a historical sketch of the Lincoln Monument Association, and the result of its labors, concluding as follows:

“By the liberal contributions of a grateful nation we have been enabled to provide a suitable place for the remains of the wisest and purest of men known to our national history. There may they rest in peace.”

After Governor Oglesby’s oration the choir sang “Rest, spirit, rest;” at the conclusion of which two Sisters of Charity, seated on either side of the statue, rose, and amid breathless silence raised the red, white and blue drapery from the marble form.

President Edwards then read a poem written for the occasion by James Judson Lord.

The band played an appropriate air, when loud calls being made for President Grant, he stepped forward, amid enthusiastic applause, and spoke as follows:

Mb. Chairman — Ladies and Gentlemen: On an occasion like the present it is a duty on my part to bear testimony to the great and good qualities of the patriotic man whose earthly remains now rest beneath the dedicated monument. It was not my fortune to make the personal acquaintance of Mr. Lincoln till the beginning of the last year of the great struggle for national existence.

During those years of doubt and despondency among the many patriotic men of the country Abraham Lincoln never for a moment doubted but the final result would be in favor of peace, union and freedom to every race in this broad land.

His faith in an all-wise Providence directing our arms to this grand result was the faith of the Christian that his Redeemer liveth.

Amidst obloquy, personal abuse and hate undisguised, which was given vent to without restraint through the press, upon the stump and in private circles, he remained the same staunch, unyielding servant of the people.

Never exhibiting revengeful feelings toward his traducers, he rather pitied them, and hoped, for their own sake and the good name or their posterity, that they might desist.

It did not occur to him for a single moment that the man Lincoln was being assailed, but that the treasonable spirit, ever waiting to destroy the freest Government the sun ever shone upon, was giving vent to itself on him as the chief executive of the nation only because he was such executive.

As a lawyer in your midst he would have avoided all that slander, for his life was a pure and simple one; and he, no doubt, would have been in his quiet home a much happier man.

But who can tell what might have been the fate of the nation but for the pure, unselfish and wise administration of Lincoln?

From March, 1864, to the day when the hand of an assassin opened the grave for Mr. Lincoln, then President of the United States, my personal relations with him were as close, as intimate, as the nature of our respective duties would permit.

To know him personally was to love and respect him for his great qualities of head and heart, and for his patience and patriotism.

Ex-Vice President Colfax, who was discovered on the platform, was loudly called for. In eloquent and feeling remarks he paid his tribute of love and respect to the honored dead.

Remarks were also made by General Sherman, Vice President Wilson and General W. F. Lindon, after which the Doxology was sung and the benediction pronounced, and the vast assemblage quietly dispersed.

Robert T. Lincoln, the only surviving son of the deceased President, Mrs. L. Smith, sister of Mrs. Lincoln, and other relatives occupied carriages in the procession. Mrs. Lincoln was unable to be present, as she is quite ill at her residence in Chicago.

Description of the Monument.

The foundation for the central part, upon which the main shaft rises, is composed of a bed of concrete seventeen feet square and eight feet deep.

On this concrete, the entire seventeen feet square, is built to a height of thirty-nine feet and four inches a solid piece of block-stone masonry, the blocks composing it in many instances weighing several tons each.

The foundation for all the outer walls and piers are six feet in depth, and are made of concrete and stone.

There are four round piers, fifteen feet in diameter at the bottom, one at each of the four corners of the central shaft.

They are twenty-eight feet and four inches in height, and tapered to form a pedestal of eleven feet in diameter at the top.

Upon these rest the statuary groups representing infantry, cavalry, artillery and marine power, works of art valued at $70,000.

There are three straight walls on each side of the central shaft, parallel with its sides and at equal distances with each other, all Joined to the round piers.

The central shaft, pedestals, and walls touching the same form a square of fifty-four feet, with round corners.

There is another wall outside of these, about ten feet distant, embracing a square of seventy-two feet and a half.

Projecting from the south side there is as oval room which extends inward nearly to the base of the monument, the whole room being thirty-two feet and a half long by twenty-four feet wide.

This is called Memorial Hall, and is designed for articles used by or in any way associated with the memory of Abraham Lincoln.

It is finished inside, both floor and ceilings, with plain stone, and is entered by a door in the south end.

On the north side there is a projection similar to that of Memorial hall. It is twenty-four feet wide by twelve feet deep in the interior, and is called the vestibule to the catacomb.

The walls are of stone and the floor of black and white marble, and it is entered by a door at the north end.

On top of the walls spoken of is a covering of immense slabs of Illinois stone, which brings the whole area of seventy-two and a half feet square and the circular projections over Memorial hall and the catacombs up to fifteen feet ten inches in height from the ground, forming the terrace.

Four flights of granite steps reach the terrace one at each corner. The two on the south side land over Memorial hall, and the two on the north over the catacomb.

The terrace stones form a roof for everything below. A heavy granite balustrade extends up the outside of each stairway and over the catacomb and Memorial hall.

The Central Shaft, at the top of the terrace, is twelve feet square, and tapers to eight feet square at the apex, ninety-eight four and a half inches from the ground.

It is hollow from the terrace to the top, the outside being dressed granite lined with hard-burned brick.

Entrance to the obelisk is made from the terrace.

On the south side of the shaft, nineteen and a half feet above the terrace and seven feet above the four pedestals sustaining the statuary groups, is the pedestal for the statue, with the United States coat-of-arms sunk is bronze in its front.

Upon the pedestal is the crowning work of the monument the statue of Lincoln. It rises in heroic proportions, a figure holding in the left hand a scroll upon which is written “Emancipation,” and in the right the pen with which Lincoln blotted from American history the stain of slavery.

As symbol of the Union to which he devoted his life, the banner of the Republic is thrown in bas-relief upon the fasces near the statue, at the foot of which is a crown of laurels.

The statue seems to reflect the grandeur of the hero whose figure art has here modeled.

The Lincoln Commemorative Silver Dollar Coin shows with an image of the Lincoln monument at Oak Ridge in Springfield, Illinois, circa early 1900s. 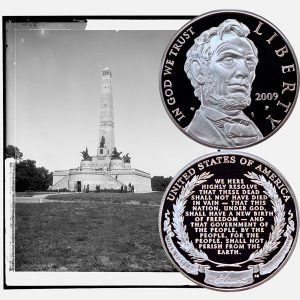