Today, the Indian Head One Cent Coin remembers the Exposition fire of October 3, 1883 in which many valuable relics burned or melted including several coin collections.

From the Wheeling [WV] Daily Intelligencer newspaper of October 4, 1883:

The Buildings Entirely Consumed by Fire Together With Their Valuable Contents — Costly Paintings and Priceless Curiosities and Relics Destroyed — Origin of the Fire.

Pittsburgh, October 3.— At 1:50 o’clock this morning fire was discovered in the boiler room attached to the Machinery Hall of the Pittsburgh Exposition.

In twenty minutes the entire large structure was in flames, and in less than an hour an open waste of hot embers marked its sight, and hundreds of thousands of dollars had been swept out of existence.

The pyrotechnical display made by the burning edifice called forth thousands of people, who lined the river’s bank and adjacent bridge and streets, and viewed the wrath of the unbridled element in awe.

The fire department quickly responded to the alarms sent out, but all efforts of subjugation were futile.

The building was of pine, much of its contents inflammable matter, and with its peculiar construction of open space and broad galleries, there was nothing to impede the flames.

They sprang up in the boiler room and shot down the aisles of exhibits, from south to north, ran along the light woodwork of the galleries and jumped from beam to beam of the exposed roof with incredible rapidity.

In ten minutes after their outbreak the building was doomed, and in an hour it was no more.

The city was crowded with guests from the adjacent country, called hither by the G. A. R. celebrations, and as many were keeping late hours, the news of the conflagration spread like magic, and in a short time all the city seemed to know that the Exposition building was burning.

The greatest day of the Exposition season had been the preceding one, when over twenty-three thousand people visited the exhibits, and in the evening it was estimated that eight thousands persons were under its roof at one time.

The losses, both actual and sentimental, are very heavy. In actual destruction, Secretary Patterson estimates that the building and appurtenances represented an expenditure of $125,000, upon which there is only $40,000 insurance; the goods on exhibition destroyed may be safely estimated at $300,000.

Many place a much higher valuation upon the destruction, but in market values the sum mentioned is about correct. In sentiments, however, and it may be argued that the sentiments involved have a monetary significance, the loss is very heavy.

There were collections of relics that can never be replaced, and the blow to Pittsburgh’s historic and antique sentiment is beyond calculation.

Immense crowds have collected around the smoking debris all the morning. A wire and large special police force keeps them back from the ruins, which in many places are mines of wealth, where exhibits of articles made of precious metals have melted down.

Many of the owners of these collections were prodding around among the embers, and it was ludicrous as well as well as pathetic to watch their “finds.”

One young lady lugubriously hugged to her bosom a dismantled teapot top, consisting of the headless, legless and armless trunk of a female figure; another wept over the blackened and twisted scabbard of a sword, which she honored as the last mundane souvenir of Gen. Mad Anthony Wayne, until a gentleman who was nursing what might have been a disreputable cold chisel, but which he asserted was the remainder of the head of Black Hawk’s hatchet, told her that Gen. Wayne’s sword Scabbard was made of leather and had gone up in smoke.

It will be many days before the remnants of destroyed property can be recovered from the ashes.

The intensity of the great heat is shown by the numerous safes that lie scattered over the burned territory badly warped and sprung, and the heavier iron articles that lie about distorted and ruined.

A chief feature of the destruction, and one which the entire country will share in unison with our local sufferers, is the loss of relics and collections.

Prominent among the former is the celebrated old engine “Arabian,” the first locomotive ever run in the United States. It is totally dismantled, and though it will probably be put together again and repaired, it ran never recover the effects of its fiery ordeal.

Among them are a portion of the Andersonville prison flag, part of Napoleon First’s state carriage, Miles Standish’s andirons from the Mayflower, Knapp’s Battery flag and Ringo’s cavalry flag, a dinner service used by Marie Antoinette, the oldest piano in America and the first piano ever brought to Pittsburgh, and at one time the property of Stephen Foster, together with Henry II dagger, and numerous anti-colonial, and revolutionary relics that can never be replaced.

In these losses Pittsburgh will have the sympathy of the entire country.

Our city’s wealth and energy can build for the future, but it can never recall the past.

“I would not take ten thousand dollars for my loss,” said Miss A. Hobson, as she swung an iron crank in her hand, which was afterwards discovered to be the key of the oldest clock in the country. “However, there were some gold revolutionary buttons, and they’re all melted down, and I’m going to have a pin made of them,” and with a philosophy that certainly did credit to the lady’s happy complacency, she smilingly pointed out the distorted iron work of an Irish grist mill made in 1740; some broken bits of crockery that were all that was left of a lot of dishes that had served through centuries in nine kingdoms, and which were considered the oldest china in the Christian world; the head of Black Hawk’s war hatchet, and a few other blackened and bruised articles that she had managed to secure from the ruins of the relic department.

The numismatic collections destroyed were very extensive and valuable. Mr. T. M. Walker, of Allegheny, lost a very valuable collection of 600 coins. When the reporter met him he had dug a couple of dozen of them out of the ashes, and, in connection with some Revolutionary “finds,” had them deposited in a nail keg.

Mr. Palmer, of Sharpsville, lost a very complete collection of United States coins. Valued at $5,000, and Mr. Leaman’s well-known gathering of some 1,100 of old, and rare modern coinage lie in ashes.

The relic safe has not yet been opened. It lies on its face among the ashes, and in its inside drawer are papers and bills of much value, which it is hoped are saved.

The loss to art involved in pictures and bric-a-brac is very severe, and, as stated, while the loss of merchandise may be easily recovered in this wealthy community, the irreparable loss of articles of sentiment will be the longest and most severely felt.

During the entire morning the fire department has kept streams of water. The only building left on the entire Exposition grounds is the restaurant. All the rest is gone. Volumes could not say more.

It was an honor to our city, a help and profit to our citizens, a source of interest and entertainment to all the surrounding country, and its loss will be felt from the Ohio to the Lakes.

The Exposition Company’s safe was taken to Holme’s banking house, on Market street, and opened at 10 A. M. Its contents were safe. In it was found $7,000 in money and about $1,200 worth of railroad tickets.

The origin of the fire is involved in mystery, but there are facts tending to show that a singular carelessness is to blame.

Prof. Warner, the balloonist, had yester day covered his balloon with oil and ochre, and it not drying as rapidly as possible when the damp evening came on he took it indoors, and ultimately brought it into the boiler room and placed it on top of the boilers (or their near vicinity) to dry.

During the day Prof Warner had purchased on three different occasions a gallon of benzine from Neely’s drug store, in the neighborhood of the Exposition building.

Neely’s clerk sold the Professor’s messenger the benzine, and understood from him that it was to be used to expedite the drying of the balloon.

Prof. Warner says there was no such inflammable substance carried into the boiler room.

Whether it was applied to the balloon, and then before thoroughly evaporated, the balloon was carried into the engine room, and a gas generated that only needed the slightest ignition to produce a conflagration will probably be developed shortly.

There have been several incendiary theories advanced, but they lack the consonance of argumentative force.

Some say that the preceding burning of the stables and loss of valuable horses, (and also the loss of a human life) generated an ill will that thus found its expression, while others advance the idea that the removal of the dwelling barges from the river front in the vicinity of the Exposition buildings, at the instigation o the officers of the latter, engendered a revenge that produced the fire.

These suppositions are given for what they are worth. The facts of its conflagration are before us, and the greater fact that it was an honor and value to Pittsburgh claims priority of attention, and will also undoubtedly interest priority of action on the part of our progressive citizens.

The Indian Head One Cent Coin shows with an image of the Pittsburgh and Allegheny area, circa 1874. 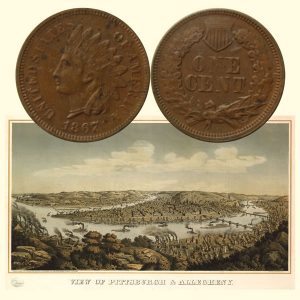