Today, the South Carolina State Quarter Coin remembers the storms on July 2, 1843, and especially the alligator that “rained down” in Charleston.

The Annual Report of the Regents, Volumes 56-57, printed by the University of the State of New York in 1843 included several articles about the storms on that day.

July 2. The thunderstorm of Sunday, July 2, which it will be remembered was hereabouts accompanied with hail and a fierce wind, was not much of a shower after all, compared with the visitations which were simultaneous almost at other places, very wide apart.

We have already given accounts of the damage done at Quebec and in the vicinity the same evening.

The following is from the Charleston Mercury of the 4th instant:—[Argus.

“The thunderstorm of Sunday night—the winding up of one of the most oppressive days ever inflicted on mortal man—was really terrific.

“It was blinding to look out; and at frequent intervals the thunderbolts burst overhead with a power that shook the solidest structures—then rolled with angry growlings along the wings of the storm.

“St. Paul’s Church was struck, but not seriously injured.

“Beyond this we have heard of no casualty, unless we may account as such the raining down of an alligator about two feet long, at the corner of Wentworth and Anson streets.

“We have not been lucky enough to find anyone who saw him come down; but the important fact that he was there is incontestible; and as he couldn’t have got there any other way, it was decided unanimously that he rained down.

“Besides, the beast had a look of wonder and bewilderment about him, that showed plainly enough he must have gone through a remarkable experience.

“By the last accounts he was doing as well as an alligator could be expected to do after sailing through the air in such bad weather.”

The Shower of Sunday — July 2d. — A violent thunder storm was experienced at Quebec and in its neighborhood on Sunday afternoon.

Several houses and barns were blown down in the adjacent parishes, and other damage done.

At St. Roch, the lightning struck the church, while the people were at vespers, and created a great deal of alarm. Fortunately, no one experienced injury.

The thunder commenced on the previous evening, and continued at intervals throughout the night, and a part of the following day, but the severe blow was in the afternoon.

During Saturday and Sunday the thermometer stood at between 80 and 90 degrees, till towards the evening. The next morning it was down to 54.

Enough rain fell to refresh vegetation, which was beginning to suffer from drought.

The Storm on Sunday — July 2. — Take it all in all, this was one of the most remarkable showers on record.

It was, strictly speaking, a shower — its continuance being but half an hour or so — but its extent was greater than that of many set storms; and every where it was ushered in by a violent gust of wind.

We hear of it from Quebec in the north, to Savannah in the south; and how much further it extended in either direction, we know not.

The violence of the wind was greatest in Lower Canada, where it was accompanied with hail, and occasioned much damage.

A Quebec paragraph mentions between 60 and 70 buildings, chiefly barns, which were blown down, in different places in that vicinity; and by the annexed letter from Berthier, which we find in the Montreal Courier, it appears that the damage in that neighborhood was still greater.

Berthier is about 50 miles below Montreal.

On Sunday last we had a dreadful storm of wind, accompanied by a deluge of rain and awful lightning and thunder.

The wind was the most terrific I ever felt or heard, I may almost say saw, so thick was the atmosphere.

Huge barns were crushed, trees turned up, and roofs upturned in every direction.

I certainly thought that our house, which has. an unusually lofty roof, must have yielded to the tremendous pressure.

Nevertheless, although the very floors trembled under us, we escaped.

Had it continued for fifteen minutes more, the damages would have been incalculable.

As it is, several hundred barns and other buildings of slight construction, between Lanorate and Yamachiche, have been destroyed, as well as very many cattle.

In the back settlement much inconvenience is caused by the vast number of trees strewn about the roads.” — [Journal of Commerce.

The South Carolina State Quarter Coin shows against an alligator in the background. 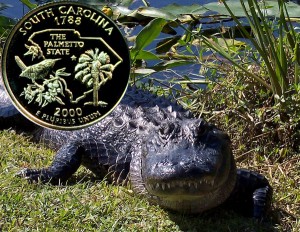