Just look at the details in this proof silver dollar reverse image. The coin is the 2005 Chief Justice John Marshall commemorative silver dollar. The obverse certainly provides an interesting portrait honoring the Chief Justice and his accomplishments, but the reverse’s intricate details are more visually intriguing. 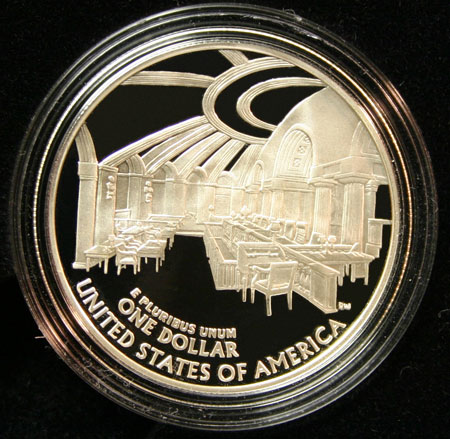 Though arches are very strong, they present difficulties to the construction crews building them. Unfortunately, the designer of these specific arches lost his life when he pulled the supports too soon. More details about the Old Supreme Court’s architecture can be found on the Capitol Architecture Web Site.

For 41 years, the Supreme Court used these facilities until 1860 when they moved upstairs into a room vacated by the US Senate. The old Supreme Court room became a law library, but in 1898 damage occurred due to a gas explosion in the sub-basement below and near the chamber. Later, in 1935, the Supreme Court left the US Capitol building.

The Old Supreme Court Chambers became a reference library, then a meeting room and later a storage room. In 1972, Congress voted to restore the Chambers to their mid-19th century glorious architecture.

Looking closely at the views from the South and the Southwest, it looks like the coin’s reverse design view on the silver dollar is from somewhere between the two.

But the detail is amazing. From the crenelatedceiling architecture to the busts on the walls along with the columns and the furniture, the details shine in the coin’s reverse design.

The coin includes chairs, desks and other fixtures in the design. During the restoration, the original furniture and other fixtures were used when available and could be repaired. Where the old fixtures could not be found or were too damaged to use, versions were re-created to match the originals as closely as possible.

This 2005 Commemorative Silver Dollar also honors the Supreme Court in addition to recognizing Chief Justice John Marshall. Congratulations to the US Mint’s sculptor and engraver, Donna Weaver, for her artistry in the coin’s beautiful and detailed view of the Old Supreme Court.