The artist for the Pilgrim Classic Silver Commemorative Half-Dollar coin included only one ship on the coin’s reverse, however two ships began the ocean voyage.

After purchasing a small ship in Holland called the Speedwell, the first part of the journey began in late July 1620 from Delftshaven, Holland headed for Southampton, England to join the Mayflower.

On August 15, the two ships set sail for their dream of a new home on the shores of the New World.

Unfortunately, the Speedwell leaked so badly that the two ships had to return to England.

After a couple of weeks, the Mayflower set sail alone for her roughly 3000 mile journey across open ocean.

“Now all being compact together in one ship, they put to sea again with a prosperous wind,” wrote William Bradford.

In its past life the Mayflower carried wine and was a relatively large ship for that era at approximately 100 feet in length.

But, with 102 passengers plus the crew plus all the tools and supplies not only for the journey but also for their new home, the families traveled in very limited space.

After 66 days, the colonists spotted land. They quickly realized their ship did not arrive at Virginia, where they had permission to make their new settlement.

Now, it was late November, the weather was cold and stormy. With their fresh water and food supplies running low, the settlers chose to make landfall.

“…they had now no friends to wellcome them, nor inns to entertaine or refresh their weatherbeaten bodys, no houses or much less townes to repaire too, to seeke for succoure.”

But these people were brave and determined in their quest.

“The dangers were great, but not desperate; the difficulties were many, but not invincible… their ends were good & honorable… and therefore they might expect the blessing of God.” William Bradford

The Pilgrim Classic Commemorative Silver Half-Dollar Coin showcased William Bradford on the obverse and the Mayflower under full sail on the reverse. 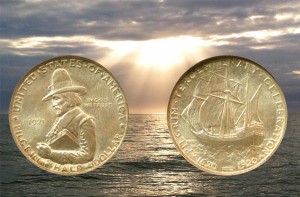