The Navy’s official name was the United States South Seas Exploring Expedition of 1838-1842.

Under the leadership of Charles Wilkes, the expedition also became known as the Wilkes Expedition.

In 1844, he wrote a narrative about the adventures.

At the beginning Wilkes included the Naval orders that detailed his exploration duties.

“The Congress of the United States, having in view the important interests of our commerce embarked in the whale-fisheries, and other adventures in the great Southern Ocean, by an act of the 18th of May, 1836, authorized an Expedition to be fitted out for the purpose of exploring and surveying that sea, as well to determine the existence of all doubtful islands and shoals, as to discover and accurately fix the position of those which lie in or near the track of our vessels in that quarter, and may have escaped the observation of scientific navigators. Liberal appropriations have been made for the attainment of these objects, and the President, reposing great confidence in your courage, capacity, and zeal, has appointed you to the command of the Expedition, requiring you to proceed to the performance of the duties of that station with the vessels placed under your orders, consisting of the sloops of war Vincennes and Peacock, the ship Relief, the brig Porpoise and tenders Sea-Gull and Flying-Fish.

“As soon as these vessels are in every respect ready, you will accordingly take your departure from Norfolk, and shape your course to Rio Janeiro, crossing the line between longitude 18⁰ and 22⁰ W., and keeping within those meridians to about latitude 10⁰ S., with a view to determine the existence of certain vigias or shoals laid down in the charts as doubtful, and whose position, should they be found to exist, it is deemed useful to the interests of our commerce to ascertain.”

His orders went on for pages detailing the exploration stops, the supply ports, the rules for interacting with the native people along with other details the Navy Department deemed important.

The orders also identified the civilian “scientifics,” as they were called by the sailors, that would be part of the expedition:

As head of the expedition, Charles Wilkes brought his experience in coastal surveying and planetary physics to the scientific team.

Stripped of their heavy armaments and loaded with scientific equipment and supplies, the six naval ships set sail from Norfolk on August 18, 1838 for their four-year tour of the southern seas and lands.

The Norfolk Classic Commemorative Silver Half Dollar against a south seas islands background. 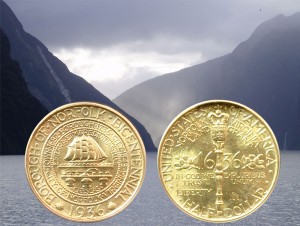