Today, the Half Cent coin remembers the copper coinage discussion and resolution on Saturday, April 21, 1787.

The Continental Congress of 228 years ago received several proposals regarding copper coinage.

They chose a committee consisting of William Samuel Johnson (CT), Rufus King (MA), William Pierce (GA), Abraham Clarke (NJ) and Charles Pettit (PA) to review the report of the proposals from the board of treasury and provide their findings to the Continental Congress.

1st. The proposal of Peter Allaire of the City of New York, is to Supply the United States with the Sum of Sixty thousand Dollars in Copper Coin, agreeably to the Standard established by Congress, within Twelve Months after the date of the Contract; Provided, that as the delivery of the said Coin shall from time to time be made, payment shall be made of the same in Gold or Silver Coin, or Bills of Exchange, at the rate of Seventy five Pounds, for every Hundred Pounds of Copper Coin.

It is further proposed by the above Gentleman to take the Copper belonging to the United States at its full value; and to pay for the same in Gold or Silver, or to Allow for the same in part Payment of the Copper Coin he furnishes.

2d. The Proposal of Messrs. Brigden and Waller of London, communicated by the Honorable Mr. Franklin, late Minister from the United States to the Court of France, is–To furnish the United States with any quantity of Copper Blanks, which they may want ready for Coinage, at the Rate of Thirteen Pennies and one eighth of a Penny Sterling per Pound; provided he is paid for the same on the delivery, in ready Money, or in Bills of Exchange at Sixty days sight.

They further propose to mill the above Blanks at One penny Sterling per Pound (should it be judged advisable) and to strike and furnish them at One Penny Sterling more per Pound. The drawings if done in London to be at the Public expense. The Copper Blanks and Coin at the prices above stated are proposed to be delivered free from every expense on board of Ships at the Port of London.

3d. The proposal of … is to furnish the United States with One hundred thousand Pounds Sterling in Copper Coin, for which he expects payment to be made on delivery at the current value, either in produce at Market price, or unquestionable Bills of Exchange.

4th. The propositions of Mr. James Jarvisare to furnish the United States with 600,000 lb. of Copper Coin within three Years from the date of the Contract; for which he offers to receive in Payment on the delivery, the Obligations of the United States for the amount of the same, payable in ten, fifteen, or twenty Years; computing two pounds and one quarter Avoirdupois, at Four Shillings and Six pence Sterling, or at one Federal Dollar. The above Obligations to be as valid as any heretofore given by the United States, and to be subject to no deduction whatsoever. The rate of Interest on them to be Six per Cent per Annum; and the United States to be allowed a Premium of 10 per Cent on the value of the Copper when Coined.

He proposes further, in case the Contract should take place, to receive the Public Copper, at the rate of Nine Pence Sterling per Pound, allowing the United States on the same Twenty five per Cent Premium, and Paying the amount of the Purchase and Premium in Copper Coin.

5th. The last proposition is from Mr. Mathias Ogden in behalf of himself and Associates.

After a week or so, the committee chose the proposal by James Jarvis and presented their position to the Congress as a whole.

With further debate on the details, the Continental Congress made the following declaration:

Resolved That the board of treasury be and they are hereby authorized to contract for three hundred tons of copper Coin of the federal standard agreeably to the proposition of Mr. James Jarvis; provided that the premium, to be allowed to the United States on the amount of copper Coin contracted for, be not less than fifteen per cent; that it be coined at the expense of the contractor, but under the inspection of an Officer appointed and paid by the United States.

That the Obligations to be given, for the payment of the copper coin to be delivered under such contract, be redeemable within twenty years after the date thereof, that they bear an interest not exceeding six per cent per annum and that the principal and interest accruing thereon be payable within the United States. That the whole of the aforesaid loan shall be sacredly appropriated and applied to the reduction of the domestic debt of the United States and the premium thereon towards the payment of the interest of the foreign debt.

The early copper Half Cent coin shows against a view of the Philadelphia Mint’s smelting room, circa 1876. 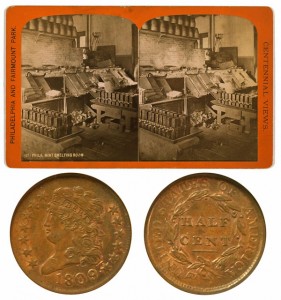