Today, the Gold Fifty-Cent Coin remembers the insurgents of 1786 and ’87.

In 1786, the general discord grew and began to be organized. On January 27, 1787, however, the insurgents, outnumbered, dispersed northward to Amherst.

But, why were they unhappy?

From Voices of A People’s History, edited by Zinn and Arnove:

Massachusetts farmer Plough Jogger, speaking about his grievances to one of the illegal conventions where opposition to the legislature was organized, said, “I’ve labored hard all my days and fared hard. I have been greatly abused, have been obliged to do more than my part in the war; been loaded with class rates, town rates, province rates, Continental rates, and all rates… been pulled and hauled by sheriffs, constables and collectors, and had my cattle sold for less than they were worth. I have been obliged to pay and nobody will pay me. I have lost a great deal by this man and that man and t’other man, and the great men are going to get all we have, and I think it is time for us to rise and put a stop to it, and have no more courts, nor sheriffs, nor collectors, nor lawyers, and I know that we are the biggest party, let them say what they will…. We’ve come to relieve the distresses of the people. There will be no court until they have redress of their grievances.”

In another book, History of the Town of Dunstable, Massachusetts, published in 1877, Elias Nason included a short description of the rebellion:

Goods amounting to thirty millions had been recently imported into our country from England, while we, at the same time, had exported of our own productions only to the amount of nine millions.

The country was, therefore, drained of its specie, and the people were poor. The result of this suicidal policy soon appeared in a strong disaffection of a part of the people towards the government.

It was during this year (1786) that the famous rebellion under Capt. Daniel Shays broke out, causing great excitement in all parts of the State.

Among the grievances presented in a memorial of the insurgents were the want of a circulating medium, the large salaries of the public officers, the aristocratic bearing of the of the law.

These, and other grievances then set forth, were not imaginary.

The people were in debt, the wages of the soldiers were unpaid, the taxes burdensome.

Daniel Shays, who had been a captain in the late war, was appointed leader of the insurgents, numbering, in all, perhaps 2,000, and in December they took possession of the court-house in the town of Springfield.

But the good sense of the people prevailed, and Gen. William Shepard, in conjunction with Gen. Benjamin Lincoln, at the head of about 4,000 troops, soon quelled the insurrection.

Though suffering greatly from the effects of the long war, and not insensible to the grievances complained of, the town of Dunstable decided that the government must be sustained, and sent her quota of men to aid in suppressing the rebellion.

The simple record of their march has been preserved.

This record was probably made by Mr. Leonard Parkhurst, who, with Capt. Nathaniel Fletcher, Isaac Kendall, and Nathaniel Cummings, were in the expedition.

They were with Gen. Lincoln, as it appears from the above record, in his memorable march from the Connecticut River through the deep snows of winter to the town of Petersham where the forces of the insurgents were concentred, — ” a march,” says Mr. Allen, ” that would have done honor to the veteran soldiers of a Hannibal or a Napoleon.”

The sudden appearance of Gen. Lincoln’s troops dispersed the rebels, and they never rallied afterwards.

Regardless, historians recognize their rebellion as having influence during the Constitutional Convention, on the document’s contents and during the ratification process.

The Gold Fifty-Cent Coin shows with an image of a political cartoon from 1787 showing the division and angst between the Federalists and Anti-federalists. 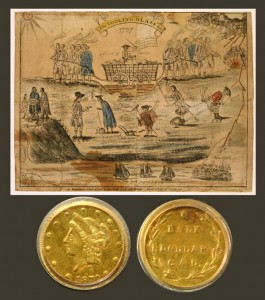