Today, the Smithsonian Commemorative Silver Dollar Coin remembers 142 years ago when Professor Joseph Henry gave all of his meteorological records to the rather new Signal Corps on February 2, 1874.

From the Congressional Series of United States Public Documents, Volume 2929, published in 1892:

The Smithsonian Institution early recognized the possibilities of the telegraph, and in 1856 it made practical application of the simultaneous weather reports received by wire, and maintained a daily weather map at the Institution.

The first attempt at published prediction seems to have been in 1858; it is found in Prof. Henry’s statement to the American Academy that when the map showed rain at Cincinnati in the morning it was considered an indication of rain at Washington in the evening sufficiently trustworthy to warrant postponing the lectures at the Institution.

The war interfered with the development of the plans of Prof. Henry, and when he was about to resume in 1865 the disastrous fire at the Institution crippled the resources at his command.

The idea thus by unfortunate circumstances forced into neglect was revived by Prof. Cleveland Abbe, since and now professor of meteorology, Signal Service, at that time director of the Cincinnati observatory.

In 1868 he succeeded in interesting the Chamber of Commerce of that city in the project of daily predictions of the weather, and under its auspices began to issue the “Weather Bulletin of the Cincinnati observatory,” which lasted from September, 1869, to January, 1871, when he was summoned to Washington to assist in the formation of the forecasting service recently assigned to the Signal Corps.

Here begins the long period in which American systematic meteorology has been embodied in the Signal Service.

The initial impulse which led the Federal Government to assume this work of public utility was given by Dr. Increase A. Lapham, of Milwaukee.

Having had his attention particularly directed to the destructive gales of Lake Michigan, he had studied the early movements of the storm centers with the result that he convinced himself of the feasibility of predicting their oncoming to the great benefit of lake navigation.

In 1869 he was able to convince the National Board of Trade of the value of his suggestion, and in December of the same year he addressed a memorial to Gen. Hillbert E. Paine, member of Congress for Milwaukee, setting forth the possibilities of the plan and confirming its commercial importance by a list of 1,914 lake disasters caused by sudden and unannounced storms.

Gen. Paine introduced a resolution embodying these suggestions, December 16, 1869, and secured the favorable endorsement of the three great, authorities on meteorology, the Surgeon-General of the Army, the Secretary of the Smithsonian Institution, and Prof. Elias Loomis, and in addition the assurance of General Myer, Chief Signal Officer, that it was quite possible to report and fore-announce storms by telegraph and signal.

The resolution was passed and approved February 9, 1870, and thus was created the Meteorological Bureau of the Signal Corps.

The new service went into operation November 1, 1870, with stations fully established, and has been maintained without interruption.

Dr. Lapham was called in frequent consultation with General Myer in establishing the novel system and was pressed to take the position of senior civil assistant, but he felt physically unable to undertake the arduous duties, and the position was filled by his friend and correspondent Prof. Abbe.

It is seen that the purpose of the Weather Bureau of the Signal Service as originally defined was the warning of storms upon the northern lakes and eastern seaboard.

By a natural extension it became a bureau of record as well, for the reports of its special observers were filed in the central office.

In 1872 and again in 1873 its scope was considerably increased by acts of Congress, and in the latter year was instituted the publication of the Monthly Weather Review which was the first attempt in this country to present meteorological data to the general attention of students with the least interval after the occurrence of the phenomena discussed.

In 1874 the new Bureau had given such satisfactory proof of its success and such promise of its permanence that the Smithsonian Institution transferred to it all the material collected in a long series of years under that system.

From that time the Signal Service, in addition to its forecasting functions, has developed into the most comprehensive bureau of record. Its well-ordered files contain almost the entire mass of observations taken from the earliest times, and additions are constantly made.

The Smithsonian Commemorative Silver Dollar Coin shows with an image of the plan for instrument shelters for maximum and minimum thermometers for the Signal Corps. 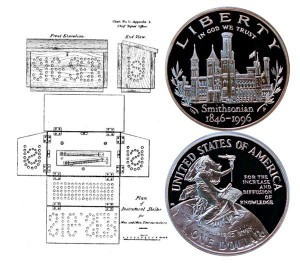