Today, the Congress Commemorative Silver Dollar Coin remembers when the men of the Continental Congress met in Philadelphia on October 24, 1774 and recommended public amusements cease.

In the months prior, Charleston, South Carolina had enjoyed a run of plays at their theatre.

After their series ended, the players planned to work in New York, however Peyton Randolph, president of the Continental Congress, sent a letter advising them of their recommendation.

From the History of the American Theatre, Volume 1, by William Dunlap, published in 1833:

The Reverend Dr. Cooper, provost of King’s (now Columbia) College, wrote the following prologue for the occasion, which was spoken by Mr. Hallam.

The doctor, it will be seen, makes the players pledge themselves to support a moral stage. I fear that this was not always remembered; and managers and actors are too apt to lay the “flattering unction to their souls” which David Garrick provided for himself and them, that “they who live to please must please to live.”

The stage, however, became more and more cleansed from “the artful hint” and the “thoughts that modesty need blush to hear,” which the writer of the verses makes the speaker, for his companions, disclaim. And in as much as the wise and the good countenance the Drama, wisdom and morality must take the place of the “ribald page” of former times.

Prologue, written by the Rev. Dr. Cooper, on the occasion of a play being performed to assist in building the New York Hospital.   **See book for prologue.**

Hallam had now succeeded Rigby both as first player and as speaker of prologues, and added be sides the best parts in farce and the holiday magician, Harlequin. The only new name added to the dramatis persona this season is that of Blackler.

In August the theatre closed in New York with Goldsmith’s new comedy of She Stoops to Conquer, and the company went to Annapolis, and thence to Philadelphia, where Mrs. Douglass (the mother of Mr. Hallam and Mrs. Mattocks) died.

This summer, the first theatre was built in Charleston, South Carolina, Douglass having gained permission from the magistrates and being invited by the inhabitants. In September he went thither, and the company followed him. They played fifty-one nights in that city, closing the campaign in June, 1774.

Hallam, Miss Hallam, and Wools, proceeded from Charleston to London, and the remainder of the company arrived in New York, intending to open the theatre in the fall; but the Provincial Congress had met in Philadelphia, and, not seeing in a company of English players from the Theatres Royal fit instruments to second the cause of American liberty, or wishing to turn the attention of mankind to something more immediately necessary in their opinion to the welfare of the colonies than any branch of the fine arts, they recommended a suspension of all public amusements.

Their recommendation was a law to those who looked up to them as the assertors of their rights; the theatres were closed, and the Thespians embarked for the more loyal colonies of the English West Indies.

It was on the 24th of October, 1774, that the first Congress passed the above resolution or recommendation. They agreed to discountenance and discourage every species of extravagance and dissipation; and among others named “gaming, cock fighting, exhibitions of shows, plays, and other expensive diversions and entertainments” — a strange medley! plays ranked with cockfighting and gambling, and these last only censured because expensive.

This resolution of Congress was conveyed to Douglass in a letter from the president, Peyton Randolph; and the committee of New York gave him likewise notice of the same.

Wignell, so well known afterwards throughout the continent, had been sent out by his cousin Hallam, on his arrival in London, and reached New York the day before the news of the recommendation of Congress found its way to that city.

He was sitting under his hairdresser’s hands, when it was made known that all the theatres on the continent were virtually closed by this recommendation. Of course he only joined the company to aid in their West India campaign, and remained unknown to North America until after she had become an independent nation.

The Congress Commemorative Silver Dollar Coin shows with an image, circa 1797, of the proposed theatre and hotel in Richmond, Virginia, after the Revolution. 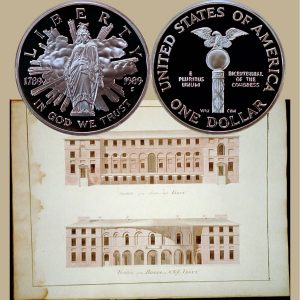