In his address on “The jubilee of the constitution” in 1839, John Quincy Adams stated, “The constitution had been extorted from the grinding necessity of a reluctant nation.”

By the Federal Constitutional Convention of 1787, the new Constitution to govern the infant nation had to be ratified by at least 11 of the states.

Some of those states agreed unanimously to the document’s rules.

Several states, however, agreed upon the condition of amendments that would protect individual’s rights against governmental tyranny.

A couple of states, North Carolina and Rhode Island, refused to approve the constitution without the accompanying Bill of Rights.

In their conditional approval, the states sent their proposed amendments to the new Congress.

Even with duplicates, the sheer number of amendments achieved the objective of getting the new Congress to pay attention.

To several state’s consternation, particularly Virginia, several of the proposed amendments were struck down, however the House of Representatives agreed upon 17 amendments of which the Senate compressed these into 12 proposed additions.

In his Analysis of Civil Government published in 1809, Calvin Townsend described the trials and tribulations of the people and the new governments.

One of the strongest objections urged by its opponents against the adoption of the Constitution as it came from the hands of the Convention was, the want of a recognition of certain rights of citizens, several of which have since been adopted as amendments to the Constitution.

Those who were vehement in their opposition to the ratification of the instrument were emphatic in urging that it ought to contain such a bill of rights as would insure individual safety among the people.

There was a popular clamor, therefore, for a comprehensive bill of rights. The people feared governmental encroachments on individual rights.

Most of the amendments to the Constitution were adopted under this apprehension, and within a few years after the organization of the new government.

The Constitution contained provisions for its own amendment ; for its illustrious authors never claimed that it was by any means perfect.

At the first session of the first Congress under the Constitution, therefore, held in New York, that body passed a resolution, Sept. 25, 1789, two-thirds of both houses concurring, proposing to the legislatures of the several States twelve articles of amendment to the Constitution.

Ten of these articles were ratified by the States in the following order, viz. : —

As the legislatures of three-fourths of the several States concurred in the first ten articles of amendment proposed, they became valid to all intents and purposes as a part of the Constitution from Dec. 15, 1791.

Since none of the amendments changed the Constitution, one gentleman of New Hampshire claimed they were “of no more value than a pinch of snuff since they went to secure rights never in danger.”

History, past and present, illustrates his lack of insight.

The Bill of Rights Commemorative Gold Five Dollar Coin shows against a reproduction of the document, circa 1920. 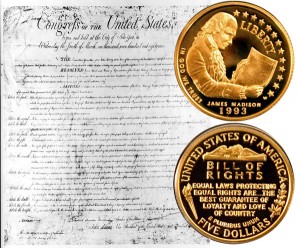