Today, the U.S. Capitol Commemorative Silver Dollar Coin remembers when the first reigning royalty visited the United States, the President and then the Congress at the capitol on December 18, 1874.

From The National Capitol, Its Architecture, Art and History by George Cochrane Hazelton, published in 1914:

On Friday, December 18, 1874, Mr. Cameron announced to the Senate that King Kalakaua was in the President’s room, and that the committee charged with his reception would suggest that the Senators call upon him.

A recess was accordingly taken until one o’clock, and the Senators proceeded in a body to be individually presented to his majesty.

At noon they all marched to the hall of the House, where the reception proper was held. The galleries were crowded, and many ladies were admitted to the floor.

Seats to the right of the Speaker’s chair were assigned to the Senators, who were received by the Members standing. General Sherman was conspicuous upon the floor.

The entire party were in citizen’s dress.

When his majesty had reached the space in front of the Speaker’s desk, Mr. Cameron introduced him as follows: “Mr. Speaker, I have the honor to present to you his majesty, the King of Hawaii.”

Mr. Speaker Blaine, with Vice-President Wilson standing on his right, then addressed the king in a speech of welcome.

His majesty’s reply was read by one of his attendants, Chancellor Allen, after the formality of a conference and the announcement that the king was suffering from a cold and hoarseness.

Following this the Speaker descended from his place and was introduced to Kalakaua, with whom he exchanged courtesies.

The former then resumed the chair; and his majesty retired as he had entered, followed by his suite and the assembled Senators.

The newspapers of the day reported the details of the reception.

From the Baltimore American and Commercial Advertizing of the next day:

After the opening prayer, the reading of the journal was dispensed with, and Mr. Cameron then stated that King Kalakaua was in the President’s room in the rear of the Senate chamber. The committee in charge of the King would suggest that the Senators now call upon him. He, therefore, moved that the Senate take a recess till 1 o’clock.

The motion was agreed to, and the Senators went in a body to the President’s room, where they were individually presented to the King. At 12:15 P.M., the King was escorted to the hall of the House, and the Senators followed to take part in the reception ceremonies.

In his opening prayer in the House this morning, Rev. Dr. Butler, the Chaplain, alluded to the visit of King Kalakaua, and thanked God for all He had gone through the Gospel, for the great government whose interests would be represented today in the person of the King.

The galleries of the House were densely crowded, and on motion of Mr. Platt, of Virginia, permission was granted for ladies outside to occupy places on the floor behind the members’ seats.

At fifteen minutes past 12 o’clock the Senate appeared, and were received by the members of the House standing. The Senators occupied seats to the right of the Speaker’s chair. Gen. Sherman occupied a seat on the floor also.

At 12:20 the King and his suite appeared, the King being escorted by Senator Cameron, chairman of the Senate Committee on Foreign Relations, and by Mr. Orth, chairman of the House Committee on Foreign Affairs. The other members of the King’s party were escorted by other members of the Committee of Arrangements. The party were all in citizens’ dress. When his Majesty had reached the area in front of the Speaker’s desk, Mr. Cameron introduced him as follows, the members standing:

“Mr. Speaker, I have the honor to present to you his Majesty the King of Hawaii.”

The Speaker, with Vice President Wilson standing on his right, then addressed the King as follows:

“On behalf of the American Congress I welcome you to these halls.

“The Senators from our States and the Representatives of our people unite in cordial congratulation s upon you auspicious journey, and in the expression of the gratification afforded by your presence in the Capitol of the nation as the nation’s guest.

“Your Majesty’s appearance amongst us is the first instance in which a reigning sovereign has set foot upon the soil of the Unites States, and it is a significant circumstance that the visit comes to us from the West and not from the East.

“Probably no single event could more strikingly typify the country’s progress in your Majesty’s country and in our own that the scene here and now transpiring.

“The rapid growth of the Republic its western coast has greatly enlarged our intercourse with your insular kingdom, and had led us all to a knowledge of your wisdom and beneficence as a ruler and your exalted virtues as a man.

“Our whole people cherish for your subjects the most friendly regard. They trust and believe that the relations of the two countries will always remain as peaceful as the great sea that rolls between us — uniting and not dividing.”

The King had a momentary conference with one of his attendants, Chancellor Allen, and then the latter expressed his regret that the King was so afflicted with a cold and hoarseness that he was unable to read his reply, and proceeded to read it for him as follows:

“Mr. Speaker—For your kind words of welcome I most cordially thank you.

“For this distinguished mark of confidence I tender to the Honorable Senate and House of Representatives my highest sentiments of regard. It is in accord with the very courteous and generous treatment which I have received from the Executive Department of the Government, and from all the people whom I have had the pleasure to meet since I landed on the shores of the Pacific.

“I appreciate the complimentary terms in which the Honorable Speaker has referred to me personally.

“For our success in government, and for our progress in a higher civilization, we are very much indebted to the Government and people of this great country.

“Your laws and your civilization have been in a great degree our model. I reciprocate most cordially the hope for the continuance and growth of friendly relations between the two countries.

“I am most happy, gentlemen, to meet you on this occasion.”

The Speaker then came down from the chair and was introduced personally to the King, and courtesies were interchanged. The Speaker then returned to his place, and the King retired as he had entered, followed by his suite and the members of the Senate.

The U.S. Capitol Commemorative Silver Dollar Coin shows with an image of the hall of the House of Representatives, circa mid-19th century. 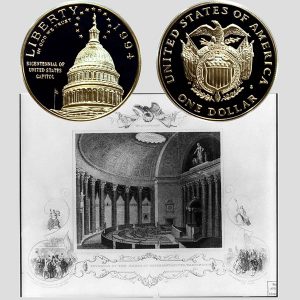