The House of Representatives and the Senate met for the first day of the second session of the Sixth Congress in their new building in “Washington City” on November 17, 1800.

Though neither achieved a quorum on that date, they continued to meet every day until their individual quorums were met.

On the 22nd, they met jointly with the President in their new building.

But, what was “Washington City” like during that first year of the new capital?

The American Architecture and Building News of July 1900 included an article describing the early days of the capital and its slow growth.

It is always interesting to read the histories of great cities, little worlds within themselves, which have so much to do with important events all along the line of human thought and progress.

And to the studious and investigating mind, it is profit and pleasure to trace the structural history of a large city, as far as possible.

As a comparatively slow grower the capital of the United States, Washington, may be considered as a fair example.

This now beautiful city will in 1900 celebrate the removal, in 1800, of the seat of government from Philadelphia to its present home.

Congress convened for the first time in Washington on November 22d the latter year date, but some time before this the future Capitol had been planned and had begun, in a very small way, its architectural progress, but the “city,” at that early date of its existence, was principally “on paper and under vegetation.”

We get a fair idea of the city at that time from the following, written by a member of the Sixth Congress:

“Our approach to the city [Washington] was accompanied with sensations not easily described. …

“Instead of recognizing the avenues and streets portrayed in the plan of the city, not one was visible, unless we except a road with two buildings on each side of it, called New Jersey Avenue.

“The Pennsylvania Avenue, leading, as laid down on paper, from the Capitol to the President’s mansion, was then, nearly the whole distance, a deep morass covered with alder-bushes, which were cut through the width of the intended avenue during the ensuing winter. ”

“Between the President’s house and Georgetown a block of houses had been erected, which then bore (and do now bear) the name of the Six Buildings.

“There were also two other ‘blocks,’ consisting of two or three dwelling-houses in different directions, and now and then an isolated wooden habitation; the intervening spaces, and, indeed, the surface of the city generally, being covered with shrub-oak bushes on the higher ground, and on marshy soil with either trees or some sort of shrubbery.

“Nor was the desolate aspect of the place a little augmented by a number of unfinished edifices at Greenleaf’s Point. …

“There appeared to be but two really comfortable houses in all respects within the bounds of the city, one of which belonged to Daniel Carroll, and the other to Notely Young.

“A sidewalk was attempted in one instance by a covering formed of the chips of the stones which had been hewed for the Capitol.

“It extended but a little way and was of little value; for in dry weather the sharp fragments cut our shoes, and in wet weather covered them with mortar.

“In short, it was a new settlement.”

Before the ceding back to Virginia of a considerable portion of the territory given by that State to help make the District of Columbia, the latter was ten miles square, including in its periphery a part of the Potomac River.

This broad stream now forms the western (Virginia) boundary of the District, while the northern, eastern and southern boundaries stretch to the Maryland line, the whole encompassing an area of about seventy square miles.

When President Washington, with Major Pierre Charles L’Enfant, surveyor, and Andrew Ellicott, on March 29th, 1791, rode over the ” ten miles square,” on a tour of inspection of the site selected for the capital, the land for the latter was occupied principally by farms, although two subdivisions — Carrollburgh and Hamburgh, both without improvements — had been laid out (the latter in the western part of the future city’s site) in 1770 and 1771, respectively.

Among these farms were those of Daniel Carroll, Notely Young and David Burns, who owned a large portion of the land upon which the city now stands.

There is little record of the farmhouses of the two former of these “original citizens,” — as quoted above, they were the most comfortable houses ” in all respects ” seen in Washington just after its founding — but, until five or six years ago, the ancient domicile of David Burns could be seen, at the foot of 17th street, near the river.

When the old Scotchman (Burns) was persuaded by President Washington to sell the greater portion of his property — consisting of about six hundred acres, and extending east from directly south of the White House to the Patent Office site — his beautiful daughter became heir to a great deal of money.

In 1802 her father died, after which she married the handsome and dashing Van Ness, then a Member of Congress from New York.

He was a high liver, believed in progress, and, with part of his wife’s wealth, built the big house spoken of above.

This now weather-beaten, but still solid, old structure was in its day one of the finest mansions in the United States, and, of course, one of the most expensive.

Its hospitality was famous; wealth, wit, and beauty gathered there, time flew by to the sound of music and dancing, and the old Scotchman’s dollars paid for feasts that were of the highest order in those days of feasting and merrymaking.

The van Ness mansion was the first in this country in which both hot and cold water were carried by pipe to all the chambers.

In its basement were the largest and coolest wine-vaults, and in one of these, it is said, President Lincoln was to have been concealed had the original intentions of the conspirators, by whom he was assassinated, been carried out.

The house cost $75,000, and the plans for it were drawn by Latrobe, then architect of the Capitol.

The excellence and beauty of the plan of Washington is due more to the engineering genius of the old Frenchman, Major L’Enfant, than to any other.

In this he followed the work of Le Notre in Versailles, the seat of the French Government buildings. The street- plan, as carried out, divides the city into quarters, known as North west, Northeast, Southwest and Southeast.

The Capitol was to be considered the centre of the city, and radiating from it are North, South and East Capitol Streets. These, with a line of parks, running west from the Capitol, form the dividing lines.

The streets run in cardinal directions, and with these are the avenues, which run diagonally, and which bear the names of various States, principally of the original thirteen.

At the intersection of streets and avenues are many small parks and triangular spaces, not a few of which contain statues standing amidst beautiful foliage, and two of the parks — Lafayette and Franklin — are very large, occupying whole squares.

From the grand scale upon which L’Enfant drew the plan of Washington, it is evident that he was looking into the future with prophetic eye, believing that in time a very queen among the cities of the world would sit in all her present grace and beauty on the banks of the historic Potomac.

And so he bent his clever mind to the task, and endeavored to carry out, as far as possible, the scheme of making a city, as conceived by him.

His was a forcible character, not easily daunted by obstacles, a fact amply attested in his treatment of an ” original citizen,” who, after he had sold his land to the Government for use as part of the capital, tried to obstruct progress in the latter.

This man was the Daniel Carroll already mentioned. After his land was disposed of at good profit, he determined to erect an imposing brick mansion, which he did without reference to the future thoroughfares of the coming city.

Sometime after the house was built, L’Enfant came along with his surveying outfit and found that Mr. Carroll had put his new domicile right in the middle of New Jersey avenue, as — only a short time before work was begun on the house — laid down on the engineer’s map.

Without hesitating, L’Enfant ordered Carroll to get his property out of the street.

At this, “Daniel Carroll, of Duddington,” a mighty man of those days, told the engineer to run his avenue in another direction, and refused to comply with the request.

And so matters rested, until one night, not long after the meeting of the two strong-willed men, the Carroll house was, at L’Enfant’s order, taken out of the way of the avenue.

Shortly after this the famous old engineer lost his position under Government, and Mr. Carroll had his house erected at public expense in another place in the city.

It will be seen from the foregoing that very little architectural progress was made in the building of the City Beautiful up to the time of commencing the Capitol.

A portion of the district, which is now a part of the city (Georgetown, West Washington), was a city in itself long before the District of Columbia was thought of; but when Rock Creek, which once divided the two cities, was crossed, going eastward, the city of Washington — when its greatest structure was begun — began in a forest and ended on all sides pretty much in the same condition.

The Congress Commemorative Gold Five Dollar Coin shows against an architectural drawing of the capitol floor plan, circa 1793-95. 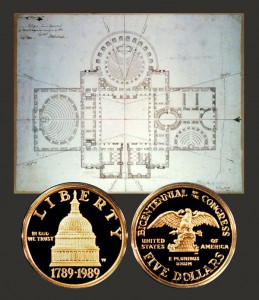