Today, the Library of Congress Commemorative Bi-metallic Ten-Dollar Coin remembers the beginning of the first Library Company in Philadelphia 285 years ago.

From the Notices of Public Libraries in the United States of America by Charles C. Jewett, Librarian of the Smithsonian Institution, published in 1851:

The Library Company and the Loganian Library — 60,000 vols. — The following facts of general interest, respecting the history of this venerable and useful institution, are extracted from an article written for Waldie’s Portfolio, by John J. Smith, esq., the librarian.

“The first entry in the records of the Library Company, is in the following words:

” ‘The minutes of me, Joseph Breintnall, secretary to the directors of the Library Company of Philadelphia, with such of the minutes of the same directors as they order me to make, begun on the 8th day of November, 1731. By virtue of the deed or instrument of the said company, dated the first day of July last.

“The said instrument being completed by fifty subscriptions, I subscribed my name to the following summons or notice which Benjamin Franklin sent by a messenger, viz:

” ‘GENTLEMEN: The subscription to the library being completed, you, the directors appointed in the instrument, are desired to meet this evening at 5 o’clock, at the house of Nicholas Scull, to take bond of the treasurer for the faithful performance of his trust, and to consider of and appoint a proper time for the payment of the money subscribed, and other matters relating to the said library.

” At this meeting a treasurer, William Coleman, duly executed a bond with sureties, and Benjamin Franklin proposed that the said Coleman attend at suitable places to receive the subscription moneys; which, says our secretary, ‘it was the general opinion should not be delayed, lest the directors be disappointed in sending it to England this fall to purchase books, or that other disappointments, prejudicial to the library design, should happen by delays or negligence on any hand.’

“The price of a share was fixed at forty shillings, and on the first evening of attendance for that purpose ten persons appeared and paid the amount of their subscriptions. Several individuals, however, were dilatory in meeting their engagements, and B. Franklin printed and sent them notice either to pay on a certain evening, or signify their determination to relinquish the co-partnership.

“Much difficulty and no little forbearance appears to have been the lot of the directors and treasurer, in collecting from some of the original subscribers; but, satisfied of the utility of the project, at a meeting on the 29th of March; 1732, the sum in hand being ‘above half’ the amount originally intended to be raised, it was concluded to be the interest of all concerned to send for some of the books immediately.

“Thomas Godfrey, at this meeting, informed the directors that Mr. James Logan had heard of the plan, and would willingly give his advice in the choice of books; the minute on the subject is in these words: ‘Upon this information, Thomas Godfrey was requested to return the thanks of the committee to Mr. Logan for his generous offer; and the committee esteeming Mr. Logan to be a gentleman of universal learning, and the best judge of books in these parts, ordered that Thomas Godfrey should wait on him and request him to favor them with a catalogue of suitable books against tomorrow evening, which T. G. readily agreed to do.’

“With the advice of Mr. Logan the list was made out, and Robert Grace, ‘to expedite the affair,’ agreed to draw on Peter Collinson, mercer, in Gracious street, London, for ‘£45 sterling at 65 percent, advance the current rate,’ in favor of and to be remitted by Thomas Hopkinson, then about sailing for England, with directions to purchase as many volumes as he could for the money.

“The catalogue of this first effort evinces considerable judgment, and was very carefully prepared with a view to facilitate the acquisition of knowledge in the various departments required by the wants of a young community.

“In October, 1732, the first importation of books was received by Captain Carnock in good order. T. Hopkinson informed the directors that he had received advice from T. Cadwalader and P. Collinson in adding and omitting various books; and that ‘Peter Collinson, who had given great assistance, had moreover made the company a present of two valuable books.’ His claim is thus established of having been the first donor to the yet infant library.

“The importance of the step thus taken, although it was on a small scale, can be justly appreciated only by a knowledge of the fact, which is stated in the reply to Peter Collinson, that there was no manner of provision made by the government for public education, either in this or the neighboring provinces, ‘nor so much as a good bookseller’s shop nearer than Boston.’

“The books were taken to ‘Robert Grace’s chamber, at his house in Jones’s alley,’ and there placed on the shelves, a catalogue made out, and Dr. Franklin undertook to print the blank promissory notes for the librarian to fill up, and get subscribed by those to whom he lent books. The rules and regulations adopted were few and simple.

“The first librarian, Louis Timothee, gave attendance from 2 to 3 on Wednesdays, and on Saturdays from 10 till 4. He was allowed to permit ‘any civil gentleman to peruse the books of the library in the library-room, but not to lend or to suffer to be taken out of the library, by any person who is not a subscribing member, any of the said books, Mr. James Logan only excepted.’

“Timothee, it appears, occupied Grace’s house, and he was to receive at the expiration of three months ‘three pounds lawful money certain,’ and a further ‘reasonable reward,’ as should be agreed on in consideration of services and rent.

“In December, 1732, several new applicants presented themselves, and were admitted. Dr. Franklin produced the printed catalogue, which he presented without charge.

“The original number of fifty subscribers was not completed till the 22d February, 1733, when Joseph Growden signed the constitution, being the fiftieth member.

“William Rawle appears to have been the first American donor, having, on the 12th of March, 1733, presented ‘six volumes or books of the works of Mr. Edmund Spenser.’

“On the 15th of May, of the same year, it was agreed by a committee of directors to draw up an address to Thomas Penn, proprietor, ‘ in order for his countenance and protection in an affair so useful and well intended as the library, and which the proprietor signified through his secretary, Mr. George, that he approved and designed to encourage.’

“Mr. Penn replied that he took the address ‘kindly,’ with the assurance that he should be always ready to promote any undertaking so useful. He presented several articles to the institution, and it is to the honor of the proprietary family that they promoted the design as long as they continued to preserve any influence in the province.

“Mr. Timothee having vacated his office, Benjamin Franklin, one of his sureties, offered to take his situation for the current year, in consideration of Timothee’s having been serviceable to him; he occupied the station of librarian for three months and a day, and was succeeded by William Parsons.

“During the period of Franklin’s service as librarian, the room was agreed to be open but once a week, on Saturdays from four to eight — it having been observed that borrowers rarely came on Wednesdays, and four hours were found amply sufficient to supply all applicants. The librarian’s salary was then reduced to £6.

“The increase of books was supposed to raise the value of a share annually ten shillings, and I find the price gradually increased.

“On the 12th of December, 1737, the directors were informed by the secretary that the proprietor was pleased to say that nothing remained to delay his grant of a lot of ground he intended to bestow on the company for their library. In May, 1738, a letter was received from John Penn, with a present of an air-pump. The first paragraph conveys information highly honorable to the company. It is dated London, 31st of January, 1738, and begins:

” ‘GENTLEMEN: It always gives me pleasure when I think of the Library Company of Philadelphia, as they were the first that encouraged knowledge and learning in the province of Pennsylvania.’

“A suitable reply and a vote of thanks for the lot and the air-pump were ordered to be returned to the generous donor. The pump excited considerable curiosity among the citizens— frequent notices of application to borrow it being minuted; a committee was appointed to provide a case and frame for it, with glass lights in the door, ‘to look ornamental in the library-room.’

The Library of Congress Commemorative Bi-metallic Ten-Dollar Coin shows with an artist’s image, circa early 1900s, of the opening of the first library in Philadelphia. 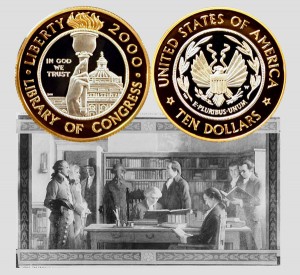