Today, the Susan B. Anthony One Dollar Coin remembers when the men of Colorado voted to allow women the right to vote within the state.

The seventh of November was election day, and a day that will long be remembered by Colorado women as the date of their admission to true and full citizenship in their beloved state; for the men, conceding in both just and generous fashion to the wishes of the women, gave a good majority vote in favor of the amendment that was to make the Colorado government in very truth a government of the people, for the people and by the people.

For the work of the last day in Denver, which stood for the order of things in other towns, the city had been districted by the Suffrage Association.

Headquarters were kept open all day and the officers of the association directed the disposition of the working forces at the polls.

The women took their stations in groups at the voting places where they believed their presence was most needed and there by the distribution of suffrage literature and the more persuasive eloquence of personal appeal to the voters, won converts to the cause.

In reporting the events of the day one of the Denver papers noted that “the ladies had no complaint to make of insult or rudeness from the men.”

The incomplete returns as published on the following morning showed that the cause of equal rights had won by a good majority and nowhere was there greater rejoicing than at the headquarters of the devoted Equal Suffrage Association where an informal and delightful reception was held on the evening after the election.

One of the amusing and significant bits of decoration in the crowded rooms were two very new brooms crossed and decorated with the suffrage and national colors.

The party vote in the Legislature upon the resolution submitting the question of woman suffrage to a vote of the people was as follows:

After the canvassing boards of the respective counties had announced the result of the election, Governor Waite issued his proclamation declaring the enfranchisement of the women and Section 1 of the Act submitting the question to the people became of full force and effect; it read as follows:

The Susan B. Anthony One Dollar Coin shows with an artist’s image, circa 1881, of the front of music titled “Shall Women Vote.” 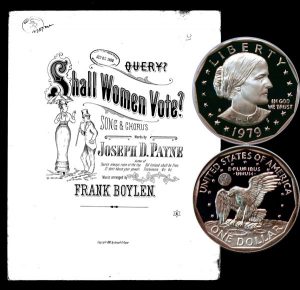