Today, the Stone Mountain Commemorative Silver Half Dollar Coin remembers Mr. Sears and his solution to a mistake he made 30 years earlier.

From the Alexandria [VA] Gazette newspaper of November 5, 1849:

Some thirty years ago, Mr. Albert Sears, a native of Sandersville in the state of Massachusetts, went to Georgis and embarked all his funds, amounting to $900, in a country store, kept by Edward Bartholomew, in the county of Green.

In nine months the partners dissolved, and Sears being considered skilful at figures, made the settlement, correctly as he supposed at the time.

His fortune amounted, at the close. to some eleven or twelve hundred dollars.

They parted, and Bartholomew heard nothing more of his friend for twenty-nine years.

Bartholomew was at his home in the county of Jackson, in August last, when his old friend and co- partner, Sears, unexpectedly presented himself, on foot, having walked all the way from Stone Mountain, a distance of twenty miles, on a sultry day in summer, for the purpose of rectifying a mistake of fifty two dollars which he had made in his own favor, in the settlement he had with Bartholomew thirty years before!

He discovered his mistake a few years back, by accidentally finding and looking over the calculation he had made upon his settlement with Bartholomew.

Having accomplished his object he returned to his home in Newnan, Coweta county, Georgia.

The Stone Mountain Commemorative Silver Half Dollar Coin shows with an image from the top of the mountain, circa 1937. 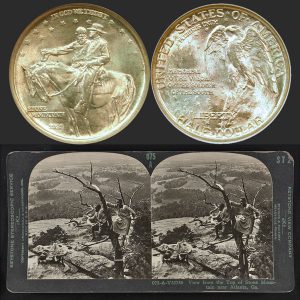