Today, the California Diamond Jubilee Commemorative Silver Half Dollar Coin remembers when the first ship from the new United States arrived at a California harbor on October 29, 1796.

From A History of California by James Miller Guinn, published in 1915:

Vizcaino’s explorations were made in the interest of the Philippine trade, which became an important factor in the commerce of the South Seas, as the Pacific Ocean was then called.

He was sent by order of the King of Spain to discover harbors where the Manila galleons might put in for wood and water and repairs after their long voyage of two thousand leagues from Japan to the California coast.

For more than a third of a century before Vizcaino’s voyage the scheme of exploring the coast of California for harbors of refuge had been agitated by the viceroys and the officials of New Spain, yet nothing had come of it. Nor was anything done for more than a century later.

One hundred and sixty-seven years passed after Vizcaino’s ships sailed out of San Pedro Bay before another ship’s keel cut the waters of Cabrillo’s Bay of Smokes and Fires.

Then the mission ship San Carlos, bearing supplies for the founding of San Diego, which had missed that port and sailed up to the Santa Barbara channel, then drifting down the coast searching for the port of its destination, cast anchor in the San Pedro Bay.

Continuing its voyage, it drifted into San Diego Bay scurvy afflicted, and ere the plague had run its course all of its crew but two had been buried at Punto de los Muertos or Dead Man’s Point.

Whether the ships bringing the King’s memorias (remembrances) for the Missions anchored in San Pedro Bay, I have found no record. The supplies for the Missions of San Gabriel and San Fernando doubtless were landed there.

With crude and cumbersome means of transportation—the wooden-wheeled carreta—it would have been almost impossible to convey these supplies from Monterey or San Diego.

The first foreign vessels to seek the trade of California came from a nation unborn and a land unsettled when Vizcaino was exploring California’s bays and harbors. These were the Yankee smugglers’ crafts.

The first of these vessels that appeared on the California coast was the ship Otter of Boston, commanded by Ebenezer Dorr.

Dorr’s ship carried six guns and a crew of twenty-six men. She anchored at Monterey October 29, 1796.

Dorr had been cruising in the vicinity of Monterey for nearly a week, evidently taking the lay of the land and calculating the chances for trade in the future.

Dorr obtained a supply of wood and water on presenting a passport from General Washington signed by the Spanish consul at Charleston, South Carolina.

He asked permission to land some English sailors who had secretly boarded his vessel at Port Saxon. He was refused permission.

He sailed from Monterey November 6th. He landed his ten convicts on the beach at night, forcing them ashore at the pistol point.

They were convicts from Botany Bay, and doubtless Dorr feared a mutiny if he kept them aboard.

Governor Borica considered this a mean Yankee trick. He set the convicts at work as carpenters and blacksmiths at nineteen cents a day.

They behaved so well that he would have been pleased to retain them in the country, but the fear of heresy haunted the Spaniard, and in obedience to royal orders he sent them next year to San Blas en route to Cadiz to be sent to England.

These vessels engaged in illicit trade all came to the coast well armed.

The Eliza, commanded by James Rowan, which anchored in San Francisco, May 27, 1799, carried twelve guns. The Betsy put into San Diego in August, 1800. She carried ten guns.

These entered the ports for supplies and for wood and water.

The Spaniards were suspicious of them and granted their requests on condition that they enter no other California port.

In the early years of 1800 the smugglers became quite active. The only products of California that were of value to them were seal and otter skins.

The otter skins were worth in China all the way from $30 to $100. The smugglers paid for them in goods and Yankee notions at prices ranging from $2.50 to $10.

The trade was carried on in obscure ports where there were no guns and no coast guard.

San Pedro Bay was one of the chief entrepots of this trade. The smuggler’s craft could anchor in the lee of Santa Catalina Island watching for an opportunity when the coast was clear, then a quick run to San Pedro Bay, a rapid exchange of goods for furs and off before the guard from the pueblo could intercept trade.

The people and the padres of the missions did not consider it a very venal sin to escape duties on the necessities that the country did not produce, and which they stood in most urgent need of.

The Spanish government had undertaken to make a government monopoly of the fur trade. A royal cedulo of 1785 directed the mission padres to collect otter skins from the natives and deliver them to the royal commissioner at a fixed price.

These were to be shipped to China, and it was expected that a large revenue would accrue to the royal treasury. The scheme failed and was abandoned in 1790.

The padres continued to secure skins, but instead of sending them to San Blas to the government officials at low prices, preferred to sell them where they could get the best terms.

The smugglers came at an opportune time.

The California Diamond Jubilee Commemorative Silver Half Dollar Coin shows with a map image of Monterey, circa 1603. 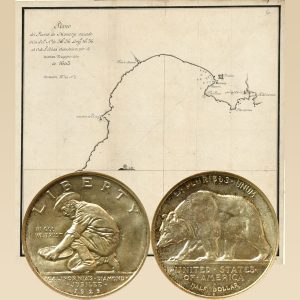