Today, the Morgan Silver Dollar Coin remembers when the Mayflower defeated the Galatea on September 11, 1886.

From the Indianapolis Journal newspaper of September 12, 1886:

The Mayflower Again Defeats the Galatea in the Struggle for the America’s Cup.

New York, Sept 11.—Today’s race has decided upon which side of the Atlantic the America’s cup shall stay, for at least another year.

It resulted in a glorious victory for the sloop Mayflower. When she finished this evening at 6:1:40, the Galatea was nearly two miles astern.

The course was twenty miles to leeward and return from Scotland light-ship.

The race was sailed in a breeze that blew fresh from the northwest for three hours; then, canting two points to the westward, it fell light, the last hours of the contest being little better than a drift.

The Mayflower had only eight minutes and twenty seconds to spare when she crossed the finish line, as the time limit of the race was seven hours.

The Galatea was defeated on every point of sailing by the Mayflower. In the run out to the outer mark with spinnaker set, she was beaten 13m 45s, and in the windward work over half an hour.

There is great rejoicing among the yachtsmen here to-night, while the Bostonians are wild with delight.

Off the Whistle buoy, at 10:15, the Galatea was cast off. Her crew soon made sail, while the Mayflower crew did the same, both setting their club topsails.

When the judges’ boat ran alongside the Galatea, Lloyd Phoenix, representing the New York Yacht Club, told the regatta committee that Lieutenant Henn was very sick in the cabin, and that he wished the course to be made fifteen miles instead of twenty, so as to be sure and finish within a reasonable time.

In case it should fall calm, he wished the Luckenbach to tow the cutter back, if the race was not completed, so that he could see a doctor early.

Secretary Robinson said he would consult with General Paine as to the length of the course. That gentleman, when seen, said he would leave the matter entirely in the hands of the committee.

They decided that the course should be twenty miles, and steaming back to the Galatea, that course was given them. Captain Bradford was sailing the cutter, Beaver Webb looked after the sails, while Mrs. Henn peeped out of the companion way with an anxious look in her eyes, for her husband’s condition alarmed her considerably.

A fleet of steam and sailing craft, nearly as large as that of Thursday, had assembled near the starting point—Scotland light-ship.

The mammoth flag-bedecked steamers, Grand Republic and Columbia, and the iron steamers, Sirius, Copheus and Taurus, were black with their human freight of yachting enthusiasts.

The breeze was freshening every moment, and, as it was the first time the yachts had come together where the first half of the contest was to be sailed to leeward, there was much discussion as to the probable result.

When the starting signal was given at 11:20, the Mayflower was in an excellent position— square to the northwest of an imaginary line drawn between the Scotland light-ship and the Luckenbach, lying to the northward of it.

Her spinnaker boom was down to port, and thirty seconds after the signal the great sail blossomed out, amid wild cheers from the thousands on the Grand Republic.

With main boom broad off to starboard, her pyramid of snowy duck gleaming in the sunlight, and a smother of foam at her side, the Boston beauty dashed across the line well in the lead.

The cutter was a full quarter of a mile to the westward when the whistle blew.

She came along with the wind abeam till she crossed the bow of the light-ship close aboard, then squaring away, her spinnaker was sheeted out exactly on the line, and the third day’s battle had begun.

With a twenty mile run before them, there was an excellent opportunity to test their speed in a steady breeze and with very little sea to impede their progress.

That a “stern chase is a long one” was never better illustrated than in that twenty-mile run. For about twenty minutes the Galatea held her own with the sloop, but after that she was practically out of the race, for the Mayflower was leading her nearly a mile when half the distance to the outer mark was covered.

The steamboat captains regarded past warnings, and kept well away from the contestants. At 12:50 the outer mark hove in sight, and in half an hour the fleet of steamers, numbering thirty-one in all, had gathered around it to await the coming of the yachts.

The wind had fallen light and had canted a point to the westward.

Down came the yachts like white winged birds before the wind.

The Mayflower’s balloon jib topsail came in at 1:41:30; four minutes later in came her spinnaker, and at 1:53 she gybed to port and came for the mark close hauled on the starboard tack.

Luffing grandly round it a few minutes later, amidst a serenade of steam whistles, the pride of Boston, under three lower sails and club topsail, began her windward work with a lead of nearly a mile.

The Galatea made a very pretty picture as she laid down to her scuppers and began her chase to windward after the sloop.

By 4:20 the wind became very light, and was growing lighter every moment.

The Mayflower was lucky enough to hold a light air under the land, while the Galatea lay almost becalmed for twenty, minutes.

The cutter tacked at 4:35, and made a short board in shore, going about again at 4:45. From here the sail up the New Jersey beach was little better than a drift.

As the Mayflower slowly approached the finish, the excitement became intense among the passengers onboard the steamers.

There was no longer any fear that the Mayflower would be defeated, but the limit of time—seven hours had almost expired, and there was great fear that, after being so near the goal, the Boston sloop might yet be unable to finish.

Just as all hope was dying out, the breeze freshened, and with only 8m 20s to spare, the Mayflower shot across the finish line close hauled on the port tack, just as the sun sunk to rest in a crimson halo behind Sandy Hook.

The sound of whistles and waving of handkerchiefs lasted fully ten minutes, the crew of the victorious sloop waving and cheering themselves until the yacht was long past the finish.

The Galatea finished 31m 18s after the Mayflower.

As she came to anchor the Mayflower’s crew gave her three rousing cheers, which the Englishmen answered.

The Morgan Silver Dollar Coin shows with an image of the Mayflower and Galatea sailing yachts, circa 1886. 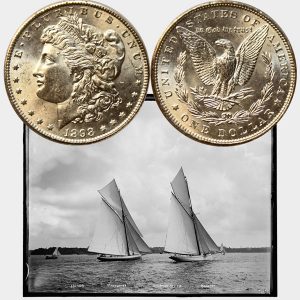