From the Cabinet Cyclopedia, The Western World, The United States, Volume II, published in 1837:

Early in March, the count de Grasse sailed from Brest with twenty-five ships of the line, five of which were destined for the East, and twenty for the West Indies.

After an indecisive encounter, in the Straits of St. Lucie, with sir Samuel Hood, whom sir George Rodney, the British admiral in the West Indies, had detached to intercept him, count de Grasse formed a junction with the ships of his sovereign on that station, and had a fleet superior to that of the British in the West Indies.

De Grasse gave the Americans notice that he would visit their coast in the month of August, and take his station in Chesapeake Bay; but that his continuance there could only be of short duration. This dispatch at once determined general Washington’s resolution with respect to the main point of attack; and, as it was necessary that the projected operation should be accomplished within a very limited time, prompt decision and indefatigable exertion were indispensable.

Though it was now finally resolved that Virginia should be the grand scene of action, yet it was prudent to conceal to the last moment this determination from sir Henry Clinton, and still to maintain the appearance of threatening New York.

The defense of the strong posts on the Hudson or North River was entrusted to general Heath, who was instructed to protect the adjacent country as far as he was able; and for that purpose a respectable force was put under his command.

Every preparation of which circumstances admitted was made to facilitate the march to the southward. General Washington was to take the command of the expedition, and to employ in it all the French troops, and a strong detachment of the American army.

On the 19th of August, a considerable corps was ordered to cross the Hudson at Dobb’s Ferry, and to take a position between Springfield and Chatham, where they were directed to cover some bakehouses, which it was rumored were to be immediately constructed in the vicinity of those places, in order to encourage the belief that there the troops intended to establish a permanent post.

On the 20th and 21st the main body of the Americans passed the river at King’s Ferry; but the French made a longer circuit, and did not complete the passage till the 25th.

Desirous of concealing his object as long as possible, general Washington continued his march some time in such a direction as still to keep up the appearance of threatening New York.

When concealment was no longer practicable, he marched southward with the utmost celerity. His movements had been of such a doubtful nature, that sir Henry Clinton, it is said, was not convinced of his real destination till he crossed the Delaware.

Great exertions had been made to procure funds for putting the army in motion; but, after exhausting every other resource, general Washington was obliged to have recourse to count Rochambeau for a supply of cash, which he received.

On the 30th of August, at three in the afternoon, the combined American and French armies entered Philadelphia, where they were received with ringing of bells, firing of guns, bonfires, illuminations at night, and every demonstration of joy.

Meanwhile count de Grasse, with 3000 troops on board, sailed from Cape Francois with a valuable fleet of merchantmen, which he conducted out of danger, and then steered for Chesapeake Bay with twenty- eight sail of the line and several frigates.

Towards the end of August he cast anchor just within the capes extending across from Cape Henry to the middle ground. There an officer from the marquis de la Fayette waited on the count, and gave him full information concerning the posture of affairs in Virginia, and the intended plan of operations against the British army in that state.

Earl Cornwallis was diligently fortifying himself at York and Gloucester; the marquis de la Fayette was in a position on James River to prevent his escape into North Carolina, and the combined army was hastening southward to attack him.

In order to cooperate against lord Cornwallis, De Grasse detached four ships of the line and some frigates to block up the entrance of York River, and to carry the land forces which he had brought with him, under the marquis de St. Simon, to La Fayette’s camp.

The rest of his fleet remained at the entrance of the bay.

Sir George Rodney, who commanded the British fleet in the West Indies, was not ignorant that the count intended to sail for America; but, knowing that the merchant vessels which he convoyed from Cape Francois were loaded with valuable cargoes, the British admiral believed that he would send the greater part of his fleet along with them to Europe, and would visit the American coast with a small squadron only.

Accordingly, sir George Rodney detached sir Samuel Hood with fourteen sail of the line to America, as a sufficient force to counteract the operations of the French in that quarter.

Admiral Hood reached the Capes of Virginia on the 25th of August, a few days before De Grasse entered the bay; and, finding no enemy there, sailed for Sandy Hook, where he arrived on the 28th of August.

Admiral Graves, who had succeeded admiral Arbuthnot in the command of the British fleet on the American station, was then lying at New York with seven sail of the line; but two of his ships had been damaged in a cruise near Boston, and were under repair.

At the same time that admiral Hood gave information of the expected arrival of De Grasse on the American coast, notice was received of the sailing of De Barras with his fleet from Newport.

Admiral Graves, therefore, without waiting for his two ships which were under repair, put to sea on the 31st of August, with nineteen sail of the line, and steered to the southward.

On reaching the Capes of the Chesapeake early on the morning of the 5th of September, he discovered the French fleet, consisting of twenty-four ships of the line, lying at anchor in the entrance of the bay.

Neither admiral had any previous knowledge of the vicinity of the other till the fleets were actually seen.

The British stretched into the bay; and soon as count de Grasse ascertained their hostile character, he ordered his ships to slip their cables, form the line as they could come up, without regard to their specified stations, and put to sea.

The British fleet entering the bay, and the French leaving it, they were necessarily sailing in different directions: but admiral Graves put his ships on the same tack with the French; and, about four in the afternoon, a battle began between the van and centre of the fleets, which continued till night.

Both sustained consider able damage. The fleets continued in sight of each other for five days: but De Grasse’s object was not to fight unless to cover Chesapeake Bay; and admiral Graves, owing to the inferiority of his force and the crippled state of several of his ships, was unable to compel him to renew the engagement.

On the 10th, count de Grasse bore away for the Chesapeake, and anchored within the capes next day, when he had the satisfaction to find that admiral de Barras, with his fleet from Newport and fourteen trans ports, laden with heavy artillery and other military stores for carrying on a siege, had safely arrived during his absence.

That officer sailed from Newport on the 25th of August, and, making a long circuit to avoid the British, entered the bay while the contending fleets were at sea.

Admiral Graves followed the French fleet to the Chesapeake; but, on arriving there, he found the entrance guarded by a force with which he was unable to contend.

He then sailed for New York, and left count de Grasse in the undisputed possession of the bay.

The Sesquicentennial of American Independence Commemorative Silver Half Dollar Coin shows with an artist’s portrayal of the battle between the French and British in the Chesapeake Bay. 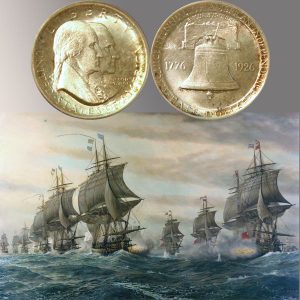