From the Washington, DC, Evening Star newspaper of August 29, 1923:

By the Associated Press.

San Diego, Calif., August 29. Beyond the statistical achievements of Capt. Lowell H. Smith, and Lieut. John P. Richter, Army aviators, who had broke several world’s records for endurance and distance and speed when they landed early last night after cruising above the city continuously for thirty-seven hours and a quarter, a new leaf flutters from the scroll in the sky on which the mechanical romance of aviation is being written.

The new chapter, while less spectacular, has implications perhaps more momentous. For Capt. Smith and Lieut. Richter took on in mid-air fuel for their DeHaviland plane no less than fifteen times.

They had accomplished the feat before, but only as a daring experiment. This time they proved it practicable, durable, comparatively easy, as schemes of the air go.

Thus they established that planes need not carry great amounts of fuel and food to go vast distances without stopping, but may fly on indefinitely to be met at certain air lanes by refueling and re-provisioning planes.

The summary of their flight as recorded officially at the air field shows:

World records: Duration record, 37 hours 15 minutes 14 4-5 seconds, or 1 hour and 10 minutes longer than the record of Kelly and MacReady.

Capt. Smith was born in Santa Barbara, Calif., and during the recent war was assistant officer in charge of training at Kelly Field, Tex. Later he was a member of a Handley-Page bombing group in England. In October, 1919, he won the San Francisco-New York and return air race, with 54 hours’ elapsed flying time.

Lieut. Richter, a native of Virginia, received his air training in British and French military schools early in the war, and was one of the first American flyers sent to the war zone. He served in the Meuse and Argonne offensives as combat pilot with the 22d and 139th Pursuit Squadrons of the 2d Army pursuit group.

On June 28, hoping to remain aloft four days and planning to stay up until their engine burned out, they took off in the early morning for what proved to be almost a twenty-four hour flight.

On that day eleven contacts were made with the supply plane.

The flyers kept up communications with the ground by dropping notes, flagged with markers, when they passed over the landing field.

No effort was made to attain speed in either of these earlier attempts, the two flyers seeking marks for duration rather than speed. However, owing to structural peculiarities of the plane, the average speed for the second attempt reached 84.73 miles an hour. This speed caused two records to fall to Smith and Richter— those for 2,500 and 3,000 kilometers.

Both records were held by Lieuts. Oakley Kelly and John A. MacReady.

Early the morning of June 29 fog developed, causing the flyers to shift from the official course to a smaller one, and a little later a fuel line clogged. Lieuts. Virgil Hines and Frank Seifert, manning the supply plane, made several efforts to fuel the record-seeking flyers, and about fifteen gallons of gasoline was delivered.

The planes were forced to pull apart because of the danger of a collision in the fog.

Smith and Richter had further trouble and finally landed in the mud flats off North Island, the plane turning over. Richter suffered some slight burns from the gasoline which became ignited, and Smith escaped uninjured.

The Peace Silver Dollar Coin shows with an image of mid air refueling in 1923. 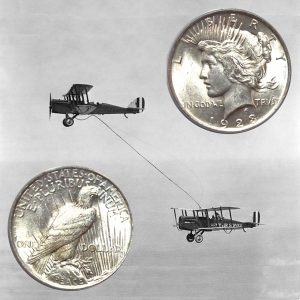